US Secretary of State John Kerry has insisted that Washington and Berlin remain "great friends" despite a new spying scandal. Two new alleged cases of espionage have rocked German-US relations over the past two weeks. 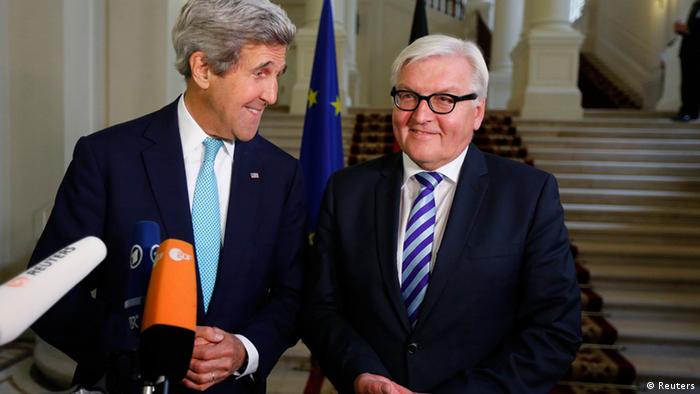 Standing alongside his German counterpart, Frank-Walter Steinmeier, on Sunday in Vienna, Secretary of State Kerry stressed the strategic importance of relations between the two countries.

"Let me emphasize the relationship between the United States and Germany is a strategic one. We have enormous political cooperation and we are great friends. And we will continue to work together," Kerry said.

Despite "some hardships in our bilateral cooperation over the past weeks," German-US relations were indispensable for both sides, Steinmeier added.

"That is why we want to work on reviving these relations, on the basis of trust and mutual respect," Steinmeier said. Both leaders are in the Austrian capital for nuclear talks with Iran.

It was the first high-level encounter between officials from the two countries since Berlin expelled Washington's CIA station chief on Thursday. His expulsion follows revelations of two alleged spying cases, reigniting simmering German anger at US snooping.

Over the past two weeks, authorities have uncovered two Germans who allegedly were working for the US as spies. In the first case, a BND employee admitted to spying for the United States after the German government alleged that he had sold more than 200 documents to the CIA for 25,000 euros ($34,000). In the second case, an employee at the Defense Ministry has been questioned on suspicion of espionage but has denied the allegations.

Merkel addressed the recent spying allegations in an interview with the public broadcaster ZDF on Saturday, saying that the US and Germany have "fundamentally different views" about how intelligence agencies should operate. She said partners should not spy on each other, though she acknowledged that it would be difficult to convince the United States to change its ways. Despite their differences, Merkel wants German and US intelligence agencies to continue cooperating.

Meanwhile, on Sunday, the mass-market newspaper Bild reported that the CIA has recruited more than a dozen spies in several German government ministries, citing unnamed sources within the US intelligence community. Bild also reported that growing pressure in Germany has caused US intelligence operatives to now consider basing their recruitment activities in Warsaw or Prague.

US irritated by German response to spying scandal

US officials have expressed their displeasure a day after Germany expelled the CIA chief in Berlin amid a new spying scandal. Earlier, Germany's foreign minister called for a renewal of ties based "on mutual respect." (11.07.2014)