A pro-Pakistan Kashmiri separatist leader, Syed Salahuddin, who was recently designated by the US State Department a "global terrorist," has vowed to continue his Hizbul Mujahideen group's armed struggle against India. 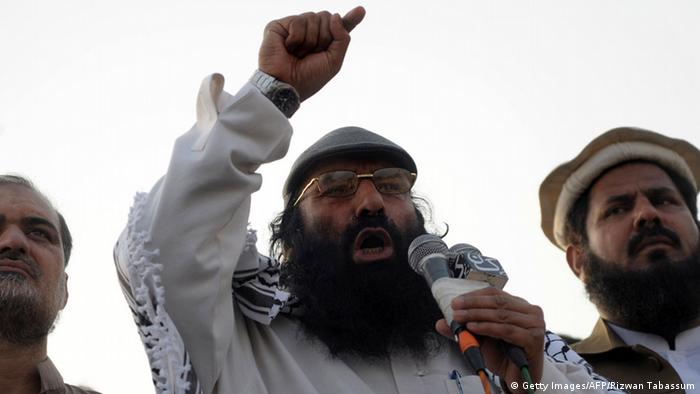 Syed Salahuddin, the leader of the Hizbul Mujahideen militant group, held a press conference on Saturday in the capital of Pakistan-administered Kashmir, Muzaffarabad, amid tight security.

Salahuddin, who is wanted by India in a number of terrorism-related cases, said his designation as "global terrorist" had no legal justification.

"Donald Trump's decision will be thrown out if anyone challenges it in American courts," he said. "No other Western nation has endorsed what this crazy Donald Trump has done," he added.

On June 26, the US State Department issued a notification naming Salahuddin a "specially designated global terrorist."

"As a consequence of this designation, US persons are generally prohibited from engaging in transactions with Salahuddin and all of Salahuddin's property and interests in property subject to United States jurisdiction are blocked," the State Department said in a statement just hours before Indian Prime Minister Narendra Modi's meeting with US President Donald Trump in the White House.

Salahuddin had slammed the US decision and said he would continue his fight.

Since 1989, Muslim insurgents have been fighting Indian forces in the Indian part of Kashmir - a region of 12 million people, about 70 percent of whom are Muslim. India and Pakistan have fought two of their three wars since independence in 1947 over Kashmir, which they both claim in full but rule in part.

After their meeting in Washington, Trump and Modi "resolved that India and the US will fight together" against terrorism, which they called a "grave challenge to humanity," vowing to increase cooperation on intelligence sharing and joint counter-terrorism efforts.

Read: India kills top Kashmiri rebel – A setback or a stimulus for separatists?

A blow to Pakistan

After the press conference, Salahuddin led a rally of his supporters in Muzaffarabad and praised Islamabad for its continued Kashmir support.

For Pakistan, the US move to designate Salahuddin as "terrorist" was a huge diplomatic blow as Islamabad believes Hizbul Mujahideen and Salahuddin are fighting for Kashmir's "freedom" from an Indian "occupation." Pakistan declared Burhan Wani, a Hizbul Mujahideen leader killed by Indian security forces in Kashmir last July, a "martyr."

Pakistan claims that its support to Kashmiri separatist groups is only political, but New Delhi claims Islamabad is training militants and providing arms to them.

"The designation of individuals supporting the Kashmiri right to self-determination as terrorists is completely unjustified," Pakistan's Foreign Office spokesperson Nafees Zakaria said in a statement following the State Department's decision.

Talat Bhat, a Sweden-based Kashmiri documentary filmmaker and trade union activist, does not expect Islamabad to change its Kashmir policy following the Trump administration's decision to declare Salahuddin a "terrorist."

"It is not a blow to Pakistan. I fear that nothing will change on the ground, although PM Modi and Indian media will portray it as 'success,'" Bhat told DW.

"Hizbul Mujahidden is already a declared terrorist organization, backed by the Pakistani military's Inter-Services Intelligence (ISI) agency. It will continue to work against liberal and secular voices in Kashmir and undermine Kashmir's genuine independence movement from both Pakistan and India," Bhat added.

- UN court's verdict on Indian 'spy' an embarrassment for Pakistan

In his Saturday speech, Salahuddin also called on the United Nations to implement its resolutions on Kashmir and allow the Kashmiri people to vote on independence or a merger with Pakistan. Salahuddin's group seeks Kashmir's annexation with Pakistan.

But experts say the 1948 UN resolution on the Kashmir plebiscite is not longer relevant as it mandated Pakistan to demilitarize its part of Kashmir, a condition Islamabad never fulfilled.

Read: Opinion: Modi's India is a bad example for Kashmiris

Some analysts also say that had Pakistan allowed an indigenous movement to take root in Kashmir, the Kashmir dispute would have more international resonance today. Indian PM Modi, they say, can now easily conceal human rights violations in Kashmir and intensify crackdowns on protesters in the name of fighting terrorism.

"We demand a solution of the Kashmir conflict based on freely expressed wishes of the people. It is high time India and Pakistan announce the timetable for withdrawal of their forces from the portions they control and hold an internationally-supervised referendum," Toqeer Gilani, president of Jammu and Kashmir Liberation Front in Pakistan-administered Kashmir, told DW.