Karl Marx a tool to 'win the future' for China, Xi Jinping says

The Chinese president has praised Karl Marx as the "greatest thinker of modern times" ahead of the bicentennial of the German philosopher. Xi's German counterpart, meanwhile, was far more critical. 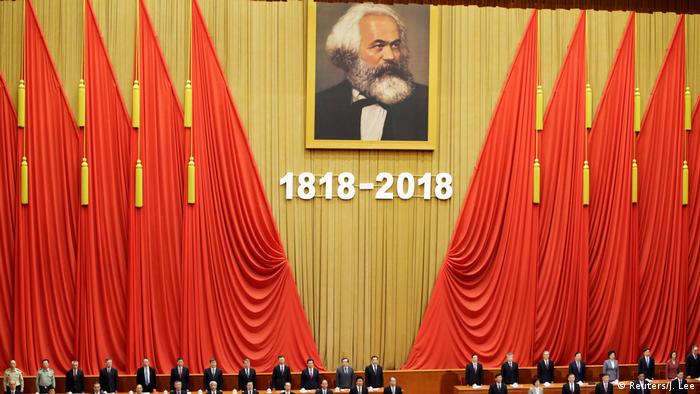 Ahead of Karl Marx's 200th birthday on Saturday, Xi Jinping referred to the German philosopher as "the greatest thinker of modern times," calling his theories on communism a tool for China to "win the future."

According to the official Xinhua News Agency, he said Marx's name was "still respected all over the world" and that "his theory shines with the brilliant light of truth." He also claimed that putting "Marxism onto the flag of the Chinese Communist party was totally correct."

He was speaking at the Great Hall of the People in central Beijing, marking the bicentennial of Marx's birth in 1818 in the southwestern city of Trier.

He emphasized that Marx is the "teacher of revolution for the proletariat and working people all over the world." Karl Marx's main work, "Das Kapital," as well as the "Communist Manifesto," which he co-authored with fellow German Friedrich Engels, became key texts for communists and the political left in general.

Xi has instructed all party members to read Marxist works and to adopt Marxist theories as a "way of life" and a "spiritual pursuit."

He praised him as "one of the great German thinkers" despite being contradictory. However, he emphasized that Marx's thinking was "rigid," and that it was impossible to separate his theories from the negative effects they had in socialist and communist countries.

For Marx, he said, it was about "liberation from poverty and paternalism, from the iron hand of an authoritarian state." But he emphasized that Marx's theories had an "enormous" effect and were all too often abused by authoritarian, communist regimes like the Soviet Union and East Germany.

"We shouldn't fear Marx, but we don't need to build any golden statues to him either," Steinmeier said.