WikiLeaks founder Julian Assange has told a London court he will not "surrender." Currently jailed for skipping bail, he is wanted in the US on conspiracy charges related to a massive security breach at the Pentagon. 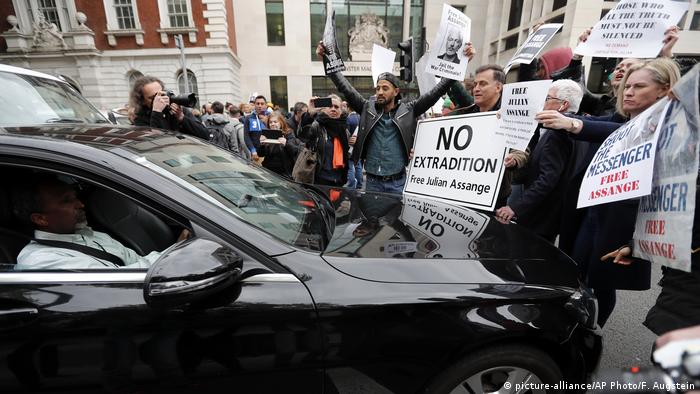 Jailed WikiLeaks founder Julian Assange told a London court, "I do not wish to surrender myself for extradition for doing journalism that has won many, many awards and protected many, many people."

The 47-year-old Australian is currently serving 50 weeks in detention at Belmarsh Prison for jumping bail in the UK in 2012 and taking up residence in the Ecuadorian Embassy, where he remained until police arrested him on April 11, after Ecuador terminated his asylum.

Assange, who appeared Thursday via video link, is accused by the United States of conspiring with Chelsea Manning to hack into Pentagon computers to steal confidential documents.

Manning served seven years of a 35-year sentence for her role in the crime until her sentence was commuted by President Barack Obama in 2011.

Charlie Beckett: Assange arrest a ‘terrible message’ to the world

The US claimed to have logs of chatroom discussions between Manning, who was a US Army intelligence officer at the time, and Assange, in which the two plotted to crack a password to access the information.

The resulting publication made international headlines in 2010 when WikiLeaks uploaded some 90,000 activity reports on the war in Afghanistan, 400,000 related to the war in Iraq, 800 detainee assessment reports from the US prison at Guantanamo Bay, and 250,000 US diplomatic cables.

Some of the most shocking material published included classified video of a 2007 Apache helicopter attack in Baghdad that killed dozens of people, including two Reuters journalists.

The US charge carries a five-year sentence, but Assange fears more charges could be added later.

Assange remains a contentious individual. Critics have called him a dangerous actor who has undermined US security, whereas supporters, some of whom appeared outside the London court Thursday, have said he is a hero for exposing the malign acts of global governments.

Most recently, he has been the subject of discussion in the US for the role that WikiLeaks played in the publication of emails stolen by Russian hackers from the Democratic National Committee (DNC) and the Hillary Clinton campaign ahead of the 2016 US presidential election.

'The fight has just begun'

WikiLeaks Editor-in-Chief Kristinn Hrafnsson, who said Assange is being held in solitary confinement under appalling conditions, said: "The fight has just begun. It will be a long one and a hard one."

At the first day of Assange's procedural hearing, Judge Michael Snow said it would likely be "many months" before a full hearing of the US case for extradition could be held.

Legal experts suggest the case could drag on for years in the British court system and eventually make its way to the European Court of Justice.

The next procedural hearing will be held on May 30. A substantive hearing is scheduled for June 12.

The Assange case: Ecuador's ambassador to the UK