A court in London has sentenced WikiLeaks founder Julian Assange to 50 weeks in prison for breach of bail. Assange, who spent years holed up in the Ecuadorian embassy, also faces possible extradition to the US. 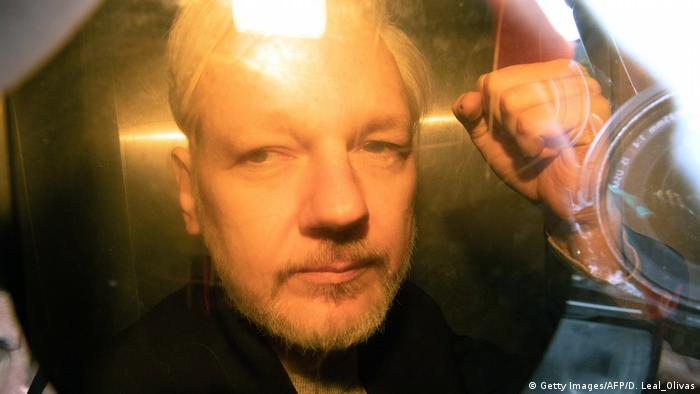 A court in London on Wednesday sentenced Assange to 50 weeks in prison for jumping bail in 2012 to avoid extradition to Sweden.

Assange, who was arrested last month after Ecuador revoked his political asylum, had raised his hand defiantly upon arriving at court in a prison van.

The Australian whistleblower took refuge at the Ecuadorian embassy in London seven years ago to avoid extradition to Sweden where he was wanted for questioning over rape and sexual assault allegations. He claimed that he feared Sweden would send him on to the United States to face charges connected to WikiLeaks' activity.

At the hearing on Wednesday, Assange's lawyer Mark Summers argued his client had suffered from an "overwhelming fear of being rendered to the US" at the time.

Assange faces a separate hearing on Thursday over an extradition request from the US, where authorities have charged him with conspiring to break into a military computer system.

Judge Deborah Taylor said it was hard to imagine a more serious version of the offense. The 47-year-old had faced a maximum sentence of a year in prison. Protesters gathered outside Southwark Crown Court, calling for Assange to be released

"You remained there for nearly seven years, exploiting your privileged position to flout the law and advertise internationally your disdain for the law of this country," Taylor said.

Assange's supporters, who had gathered inside and outside the court building, shouted "shame on you" at the judge as the verdict was read out.

In an indictment disclosed mid-April this year, the DOJ is charging Assange with "Conspiracy to Commit Computer Intrusion" with Chelsea Manning, the whistle-blowing former US Army intelligence analyst. The indictment reportedly charges that Assange assisted her "in cracking a password stored on the US Department of Defense computers."

Ecuador revoked Assange's sanctuary on April 11, accusing him of a wide variety of transgressions, from misusing communications to meddle in the country's foreign affairs to poor personal hygiene.