Ecuador's President Lenin Moreno claims Wikileaks founder Julia Assange was spying from the Ecuadorian embassy in London. Two German lawmakers and a Spanish MEP have called on their countries to grant Assange asylum. 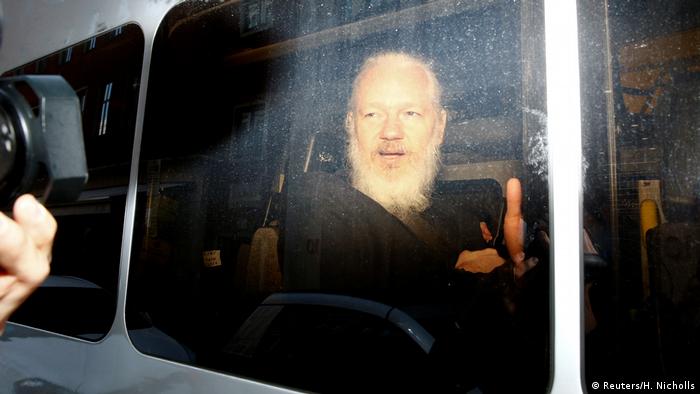 Ecuadorian President Lenin Moreno on Monday said Wikileaks founder Julian Assange had violated his asylum conditions by using the Ecuadorian Embassy in London as a "center for spying" during his seven-year stay.

"It is unfortunate that, from our territory and with the permission of authorities of the previous government, facilities have been provided within the Ecuadorian embassy in London to interfere in processes of other states," he said in an email interview with British newspaper The Guardian.

"We cannot allow our house, the house that opened its doors, to become a center for spying," Moreno added. "This activity violates asylum conditions."

Under former left-wing Ecuadorian President Rafael Correa, Assange was granted asylum in August 2012 due to perceived threats from a United States secret investigation into him.

But on April 11, embassy officials allowed police to enter the building to arrest Assange due to breach of British bail conditions linked to a Swedish extradition request. Police later said the 47-year-old Australian citizen was "further arrested on behalf of the United States authorities."

Ecuador's decision 'based on international law'

Assange's relationship with Ecuador deteriorated after he was accused of leaking information about Moreno's personal life, but Moreno, who became president in May 2017, insisted that his government's decision was "based on international law."

He told the Guardian that Britain had given "written guarantees" that Assange would not be extradited to "third countries where he could suffer torture, ill-treatment or the death penalty."

Jennifer Robinson, a lawyer who said she regularly visited Assange at the embassy, told Sky News on Sunday that Ecuador was "making some pretty outrageous allegations to justify an unlawful and extraordinary act to allow British police to come inside an embassy."

"The politics of the case, with respect to Ecuador, changed with the change of government, with Lenin Moreno coming to power in May 2017," Robinson said. "And ever since then, inside the embassy, it's become more and more difficult."

The case Assange: An exclusive interview with Ecuador’s Ambassador to the UK

Two lawmakers from Germany's socialist political party The Left and a Spanish member of the European Parliament said they had protested on Monday outside London's Belmarsh prison, where Assange is being held until his next scheduled court appearance on May 2.

"The Ecuadorian government is now trying to divert attention from its breach of the law by engaging in a disinformation and slander campaign against Assange to poison public opinion on Mr Assange," the trio said in a statement.

They said their "primary objective ... is now to prevent the extradition of Julian Assange to the USA."

"Extradition to Sweden should also be avoided, because there, too, a transfer to the USA cannot be ruled out," they added.

The trio also urged the German and Spanish governments to grant political asylum to Assange and to "work within the EU and the European Council to grant protection and hinder the extradition." 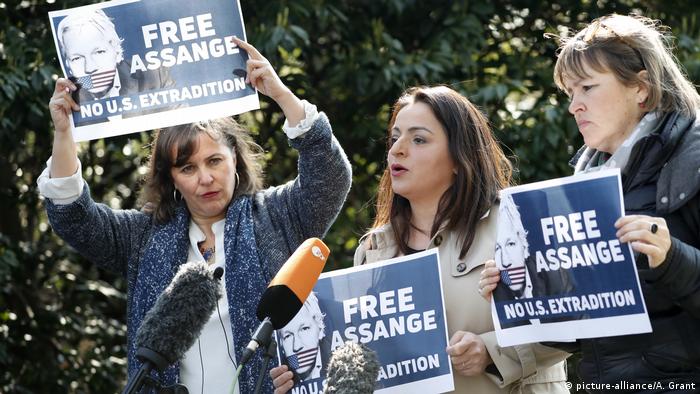 WikiLeaks founder Julian Assange has been arrested in London. We should fight for him if we truly believe in the freedom of the press, writes DW's Matthias von Hein. (11.04.2019)

More than 70 lawmakers have urged the UK government to ensure the Wikileaks founder faces Swedish justice if a rape inquiry is reopened there. The Australian is also wanted in the US over a leak of government secrets. (13.04.2019)