Joe Biden projected to win US election: What happens next?

Although Joe Biden is the projected winner of the US election, President Donald Trump has refused to concede. DW breaks down the process, precedent and hurdles between now and Inauguration Day. 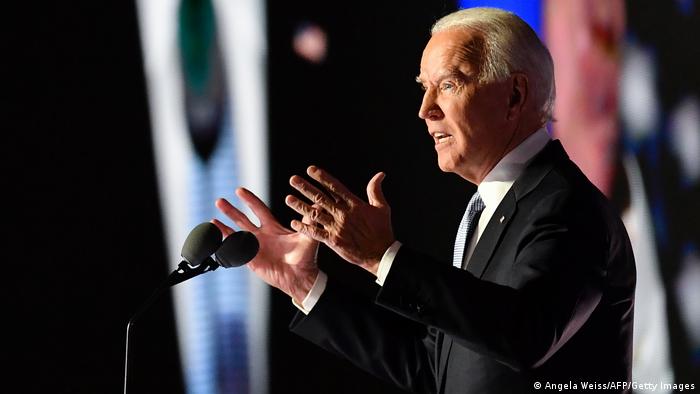 President-elect Joe Biden and Vice President-elect Kamala Harris have won the presidential election, according to projections by the Associated Press and numerous US news outlets.

The path to the White House, however, will be anything but easy this time. President Donald Trump has vowed to challenge the outcome of the vote in court and could throw up several roadblocks in the transition. DW takes a look at what to expect.

What happens between now and Inauguration Day?

Each state will need to finish counting its outstanding ballots and certify the results over the next few weeks.

The Electoral College electors will need to formally cast their ballots; the candidate who receives 270 or more electoral votes wins.

It all culminates on January 20, the date the US constitution stipulates that the next president's term begins.

Here are some key dates:

December 8: The "safe harbor" deadline — States have until this date to resolve disputes over their vote totals and certify the winner.

December 14: Members of the Electoral College cast their ballots for president.

January 5: Georgia holds runoff vote for two US Senate seats — the outcome will determine whether Republicans maintain their majority in the chamber. If they do, it will likely making things difficult for Biden.

January 6: US Congress convenes to count the electoral votes and officially declare a winner.

January 20: Inauguration Day, Biden is sworn in by the US Supreme Court Chief Justice and officially assumes office in the afternoon.

Why is the transition so important?

In the weeks leading up to January 20, Biden's team will be busy getting ready to take over from a decidedly reluctant Trump team. He will need to name over 4,000 political appointees and 1,200 of those will need to be confirmed by the Senate.

Biden staffers will need to ask their Trump administration counterparts for information to be brought up to speed on each governmental agency, figuring out what has been done and which issues are outstanding.

Biden's priority is naming a coronavirus task force comprised of leading experts to fight the coronavirus pandemic. The rest of his main Cabinet positions are likely to be announced quickly, although the interviews will be taking place digitally due to the pandemic.

The incumbent US president plays a crucial role in smoothing the transition of power. Previous presidents began preparing their teams months if not a year in advance. But it remains to be seen how — and if — Trump handles the transition.

Where do the court challenges stand?

Trump's campaign has filed numerous legal challenges to the election in several battleground states in a bid to try and overturn results. His team has vowed more cases could be filed in the coming days, while the President is pushing to get the case before the Supreme Court.

Trump has repeatedly attempted to paint the election as unfair and repeatedly issued baseless allegations of widespread voter fraud — taking aim in particular at legal mail-in ballots that millions of Americans cast across the country as an alternative to in-person voting during the pandemic.

State court cases will be crucial to get Trump to the conservative-leaning US Supreme Court, but law professor Kirk Junker told DW "the clock is running" until December 8 when states need to have their final vote tallies.

"Unlike in 2000 with Bush and Gore, we don't have that state decision yet because there hasn't been any substance to any of his state lawsuits yet. So until that happens, I see no path to the Supreme Court," Junker said.

Here's an overview (as of November 8) of the current legal challenges:

Pennsylvania: Several cases pending and likely in for the most contentious legal fight. The Trump campaign won a state court case to gain closer access to the vote-counting proceedings. There is also a case pending before the US Supreme Court challenging the state's decision to allow election officials to count mail-in ballots that were postmarked by Election Day.

Georgia: A recount of the state's votes is likely, although the Trump campaign has yet to request the count. A Trump campaign case in the county where Savannah is located was dismissed.

Michigan: A case to halt the vote count was dismissed after a state judge ruled there was no legal basis for the Trump campaign claims.

What if Trump doesn't concede?

Trump does not need to concede for the election to be legally binding or for Biden to take office. The concession speech is more of a political tradition, but an important one for the US public.

The speech signals to supporters that the campaign is over and typically encourages American unity — two messages that Trump has so far not delivered to the voters who backed him or the public at large.

Frontex suspends operations in Hungary over asylum system 5h ago

Controversial Polish abortion law to go into effect 6h ago