A presumed last regional trip by Donald Trump's son-in-law and senior adviser Jared Kushner aims to tie up loose ends in the Middle East, as the president's tenure comes to a close. 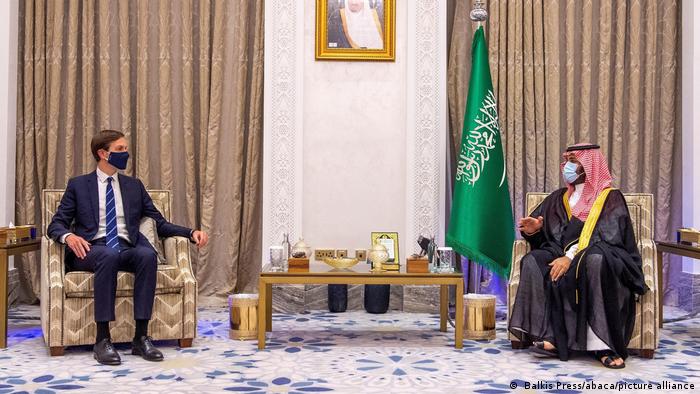 Kushner (left) was also in Saudi Arabia in September, before Trump lost his reelection bid

Jared Kushner's presumed final official trip to the Middle East in his role as President Donald Trump's senior adviser and the architect of the US' Israel-Palestine policies has raised several questions in the region and back home in the United States. And there have been few answers in the initial days.

On Wednesday, the state-run Qatar News Agency reported that Kushner and his host, the country's ruler, Emir Sheikh Tamim bin Hamad al-Thani, had discussed "developments in the region." These might have included the poisonous relationship between Qatar and Saudi Arabia and the Saudi allies the United Arab Emirates, Bahrain and Egypt, which have boycotted Qatar since June 2017, closing their sea routes, land borders and airspace to Qatari vehicles because of the country's close partnership with Iran.

The governments also accuses Qatar of financing terrorism and the transnational Muslim Brotherhood political organization, which is banned in Egypt and the allied Gulf monarchies. Qatari officials have rejected the allegations.

Qatar has compensated for the financial losses from the boycott, which also cut off many food imports, with help from Iran and Turkey. However, in November the government sent an indirect signal indicating that officials might consider reconciliation. Foreign Minister Sheik Mohammed bin Abdulrahman bin Jassim Al Thani said Qatar's government did not have a formal opinion on Middle Eastern countries' normalization of relations with Israel while the occupation of the Palestinian territories continues. He said the governments of the United Arab Emirates and Bahrain would need "at the end of the day to decide what is best for their countries." However, he added, "I think it's better to have a united front" and to prioritize "the interests of the Palestinian people." 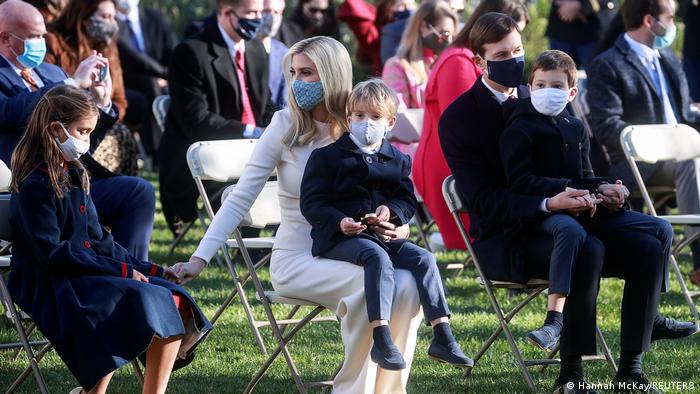 At the moment, the Middle East can sometimes appear to be split in two, with Iran and its allies on one side and Saudi Arabia, Israel and the United States and the countries they support on the other. Kushner is expected to pick up the topic of Iran in Saudi Arabia.

The single-term diplomacy of the Trump administration was erratic, but the president made clear that Iran was one of his primary issues. Iran will also be high on the agenda of this successor, former Vice President Joe Biden.

Both Biden and Trump "are concerned about Iran's accumulation of nuclear material," Ron Kampeas wrote in a recent analysis published by the Jewish Telegraphic Agency. Biden could attempt to return to the deal that the Obama administration and other countries signed with Iran in 2015 to limit the country's nuclear accumulation. The deal was ultimately scrapped by Trump, who also now has a stake in not seeing it restored.

"The outgoing president is taking steps to obstruct his successor, most notably with an intensified sanctions regime," Kampeas wrote. "The most potent way of scotching a return to the Iran deal would be to launch a conflict with Iran."

Such a conflict would be problematic, of course. An attack on Iran would hinder any hopes of repairing the financial system in the Middle East, Karen Young wrote in a November article published by the regional news website Al-Monitor. "In fact," Young wrote, "it would usher in a lost generation, throwing away its chance at a demographic dividend, arresting a young, relatively healthy and decently educated population and condemning them to poverty, immobility and silence — perhaps the greatest missed opportunity since the discovery of oil." 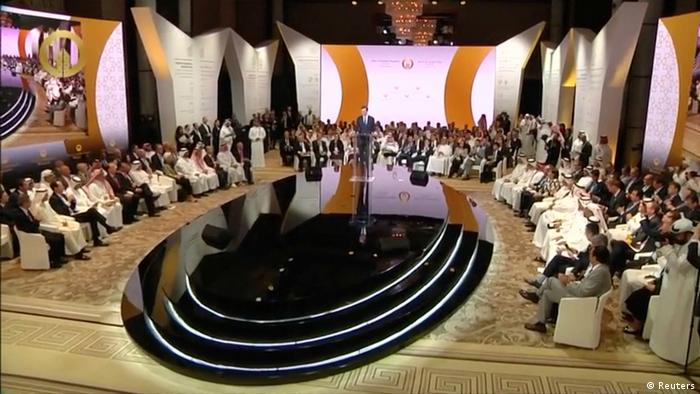 Kushner addressed the 'Peace to Prosperity' conference in Bahrain in 2019

Crown Prince Mohammed bin Salman, often referred to as MbS, may have reasons for concern about Saudi Arabia's relationship with a United States controlled by Joe Biden. Some members of the US Congress have said MbS was involved in the assassination and dismemberment of the exiled Saudi dissident and Washington Post journalist Jamal Khashoggi by government agents at the country's Istanbul consulate and have called for the crown prince to be held to account. Trump's administration has blocked all efforts, and Washington Post journalist Bob Woodward even reported that the president had boasted that "I saved his ass."

Günter Meyer, the director of the University of Mainz's Center for Research on the Arab World, told DW in November that Biden would have to position himself clearly. "Ahead of the elections, Biden said that he would 'rethink' the relationship with Saudi Arabia," Meyer said. "Such an announcement usually entails far-reaching changes."

The political rulers of the United Arab Emirates are probably less worried about their personal fates. On the other hand, the country's geographical location makes it particularly vulnerable in case of a military conflict. The ongoing war in Yemen, from which the United Arab Emirates has now largely withdrawn, has already shown how little the UAE's rulers can do against irregular opponents such as the Iran-backed Houthi militias. So the United Arab Emirates will surely be hoping to maintain its good relationship with US, which has offered it protection so far. 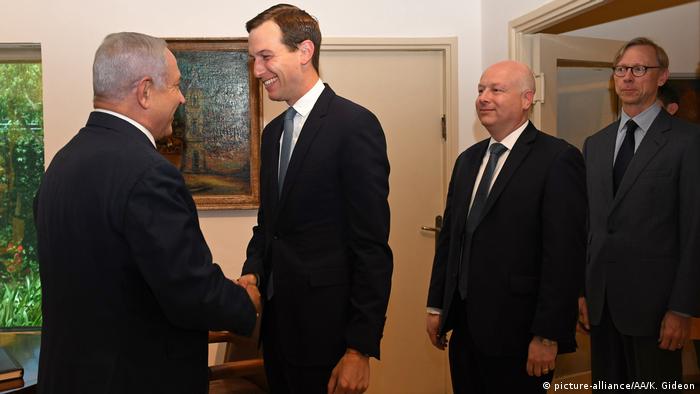 Israel's government also faces the question of how to deal with Iran. Officials in the United States and Iran have said evidence points to Israel's involvement in the assassination of the prominent Iranian nuclear scientist Mohsen Fakhrizadeh on November 27. There has been no comment from Israel's government to date.

Should Israel's involvement in the assassination be confirmed, that could test the government's newly normalized relations with the United Arab Emirates, Bahrain and Sudan — a project encouraged by the US. Many people in the region might not be willing to back a war against Iran, and certainly not to ensure Israel's security. The political fallout of such a scenario is hard to calculate.

Moreover, Israeli Prime Minister Benjamin Netanyahu would require US backing if he were to opt for full-on military action against Iran. "Biden might be less than willing to fully support Israel if Netanyahu is seen as triggering the war," Kampeas wrote for the Jewish Telegraphic Agency.

These questions could remain open until after the inauguration on January 20, 2021, when a sworn-in President Biden makes his plans for the region clear.

Airbnb cuts all listings in China amid fierce competition

Our love-hate relationship with supermarket self-checkouts

'Quad' talks in Japan open with eyes on China and Ukraine