The US Secretary of State is visiting Israel after the Trump administration's announcement of an ambitious Arab-Israeli peace plan. He will also visit several Gulf Arab states and Sudan this week. 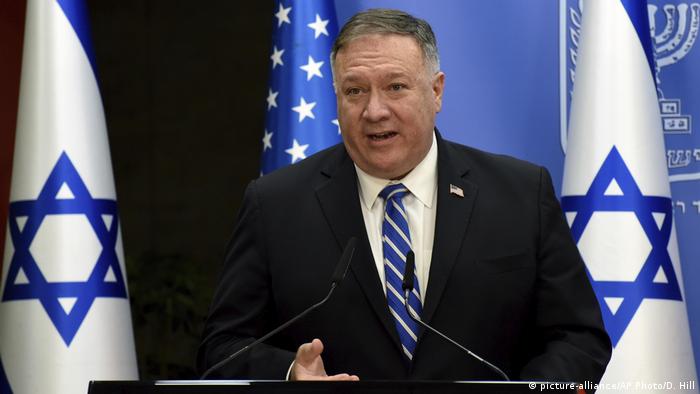 US Secretary of State Mike Pompeo arrived in Israel on Monday, making an appeal to Arab nations after the Trump administration proposed an ambitious Arab-Israeli peace plan.

Read more: Will the Israel deal pave the way for Emirati repression?

Why is the trip significant?

Pompeo, the first of two senior US officials to travel to the region, is pushing for Arab states to normalize ties with Israel after the United Arab Emirates (UAE) and Israel struck a peace deal earlier this month.

On August 13, Israel and the UAE announced that they would establish full diplomatic relations, in a deal that required Israel to halt its plan to annex occupied West Bank land.

"I am hopeful that we will see other Arab nations join in this," Pompeo said. "The opportunity for them to work alongside, to recognize the state of Israel and to work alongside them will not only increase Middle East stability, but it will improve the lives for the people of their own countries as well.''

The UAE agreement marked a key foreign policy victory for Trump, as he seeks re-election, and reflects shared concerns over Iran. The historic deal makes the UAE only the third nation in the Arab world, along with Egypt and Jordan, to have full diplomatic relations with Israel.

Pompeo is expected to be followed to many of the same destinations by US President Donald Trump's senior adviser and son-in-law, Jared Kushner. In addition to Israel and Sudan, the US State Department said Pompeo will travel to Bahrain and UAE, and could possibly make stops in Oman and Qatar.

In Israel, Pompeo has met Prime Minister Benjamin Netanyahu "to discuss regional security issues related to Iran's malicious influence, establishing and deepening Israel's relationships in the region, as well as cooperation in protecting the US and Israeli economies from malign investors."

In Khartoum, the Sudanese capital, Pompeo will meet with Prime Minister Abdalla Hamdok "to discuss continued US support for the civilian-led transitional government and express support for deepening the Sudan-Israel relationship."

Sudan is vying to be removed from the US list of state sponsors of terrorism, and normalizing ties with Israel could bring Sudan closer to that.

Meanwhile, Kushner is expected to visit Israel, Bahrain, Oman, Saudi Arabia and Morocco on his tour, which is scheduled to begin at the end of the week, according to diplomats speaking on the condition of anonymity told the Associated Press. Kushner's itinerary has yet to be formally or publicly announced.