Japan′s TEPCO nuclear plant restarts fear of new Fukushima | Asia | An in-depth look at news from across the continent | DW | 05.10.2017

Japan's largest nuclear power plant has been declared safe by regulators, prompting renewed concerns from critics that operator TEPCO has not learned the lessons of the 2011 Fukushima disaster. Julian Ryall reports. 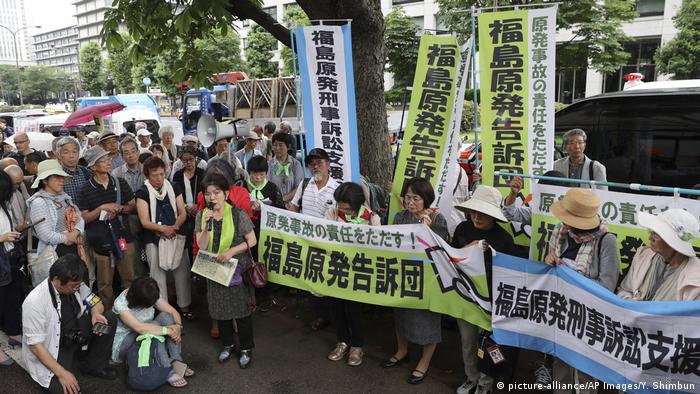 On Wednesday, the Japanese Nuclear Regulation Authority (NRA) confirmed that two reactors at the Kashiwazaki-Kariwan power plant, the largest nuclear power facility in the world, passed safety screenings and could resume operation.

The decision has been broadly criticized across the country, with anti-nuclear campaigners, media and people living close to atomic energy facilities saying the operator of the plant has not learned the lessons from the Fukushima disaster in March 2011.

Japan's atomic energy watchdog confirmed that the number 6 and 7 reactors at the Kashiwazaki-Kariwa, located on the coast of Niigata Prefecture in northern Japan, had met new safety standards introduced after the Fukushima crisis.

A handful of other nuclear energy operators in Japan have previously been granted permission to resume operations of reactors, which were all shut down in the aftermath of the second-worst nuclear accident in history. However, this is the first time that Tokyo Electric Power Company (TEPCO) has received approval to push ahead with producing energy output.

A new disaster waiting to happen?

After the magnitude 9.0 earthquake and the ensuring series of tsunami struck TEPCO's Fukushima nuclear power plant in March 2011, the company was condemned for safety failures.

In the quake's aftermath, three of the six reactors at Fukushima suffered core meltdowns and radioactive material was released into the environment. The Japanese government estimates it will take at least three decades and cost more than 20 trillion yen (€150.87 billion, $176 billion) to make the plant safe and decontaminate the surrounding area.

That figure is double the initial estimate that was provided by TEPCO in 2013. Meanwhile, thousands of people are still unable to return to their homes across a large swathe of rural northeast Japan.

And while there are still more hurdles for TEPCO to overcome before Kashiwazaki-Kariwa goes back online, environmental groups are concerned.

"The reactor in Niigata is very similar in design to the Fukushima ones and TEPCO has still not found out the precise reasons for why the accident there happened," Caitlin Stronell, a spokesperson for the Tokyo-based Citizens' Nuclear Information Center, told DW.

"The governor of Niigata Prefecture has stated that until the causes have been confirmed, then it is not possible to guarantee the safety of the Kashiwazaki-Kariwa plant," said Stronell. "The full results of the investigation are not expected for another three years, and even then, questions are certain to be raised about whether the findings are satisfactory.

"It is clear that TEPCO is having a difficult financial time and that it is keen to start up its reactors in order to survive as a company, but we do not think that is a good enough reason to reopen the plant," said Stronell. "Safety has to be the priority," she said, adding that Kashiwazaki-Kariwa has a history of its own problems.

The plant was just 19 kilometers (11 miles) from the epicenter of a magnitude 6.6 earthquake in July 2007, a tremor that shook the facility beyond its design basis and required that the plant to be shut down for 21 months for seismic upgrades.

"It was known that this area was prone to earthquakes and there are some reports that the operator was lucky that the 2007 tremor did not cause a disaster on the scale of Fukushima," Stronell said. "Many people say it was just a matter of good luck that it didn't."

The plant was again shut down after the Fukushima accident, although it did not suffer any damage in that earthquake.

"The other issue that local people have with TEPCO is one of trust," Stronell added. "Can they take the company at its word? Ever since 2011, there has been a large degree of distrust."

The Japanese media is making the same point, with an editorial in Thursday's edition of the Asahi Shimbun headlined, "Can TEPCO still be trusted after past disasters and attitudes?"

The editorial pointed out that after the 2007 earthquake, management of the utility vowed to learn the lessons and ensure that nothing similar ever happened again. A mere four years later, the Fukushima disaster was far worse, it added.

Shaun Burnie, senior nuclear specialist for Greenpeace Germany, says the main concern remains seismic risk, even after the industry regulator declared that the plant is safe.

"The TEPCO reactors were not designed or constructed to withstand the most severe seismic energy that is very possible at the Niigata site," he said. "Yet TEPCO and the NRA seek to downplay and ignore those risks.

"This was a political decision driven by a desperate attempt to secure income for TEPCO but - even if they eventually operate, and that is still years away - it will only cover a fraction of the tens of trillions of yen it will need to pay for the Fukushima reactor meltdowns."

"If TEPCO has any future it will be in renewables - not nuclear power," said Burnie.

Five workers at a nuclear research facility in eastern Japan have been exposed to dangerously high levels of radiation. Authorities say a bag containing plutonium opened while the group was inspecting equipment. (07.06.2017)

With communities refusing to come forward to host the by-product of Japan's nuclear energy industry, the Japanese government is drawing up a map of the most suitable locations for underground repositories. (05.05.2017)