Japan and the EU have agreed to increase cooperation on trade, the environment and security. The two sides enacted a large trade deal in February, an agreement they believe counters the "global trends of protectionism." 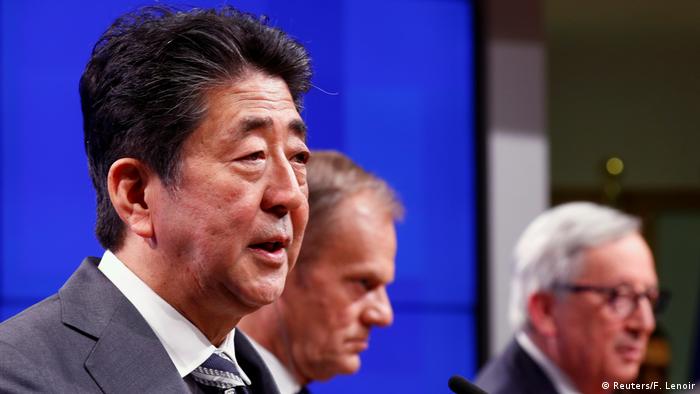 The leaders agreed to closer cooperation on security, the environment and trade and pledged to pursue long-awaited reforms to the World Trade Organization (WTO).

"Our strategic partnership has never been stronger," Tusk said on Thursday. "It is built on shared values of liberal democracy, human rights and our commitment to openness, cooperation as well as free and fair trade."

The summit came less than three months after a massive trade deal took effect in which most of the €1 billion euros ($1.1 billion) that EU companies pay in export duties to Japan were removed.

Abe told reporters the trade deal "is a result of our leadership to maintain and develop the global free trade regime against the global trends of protectionism."

"The most important issue for the international community right now is to maintain the free-trade regime," Abe said. "Restrictive measures are not in the interests of any country."

On Friday, Abe is set to meet with US President Donald Trump, who has threatened to impose new tariffs on EU goods and is locked in an escalating trade war with China. The Japanese prime minister's Western tour comes two months before Japan is scheduled to host a summit of the Group of 20 industrialized nations.

Abe also shared his concerns over the United Kingdom leaving the EU without a withdrawal agreement in place. Many Japanese companies are based in the UK because they saw it as a gateway to Europe, and Abe said they need "legal stability" and transparency ahead.

"We welcome the fact that for the time being a no-deal Brexit is avoided," Abe said. "For Japan, the UK is a gateway to Europe, so a smooth Brexit is what we are hoping for."

Almost all tariffs on trade between the European Union and the world's third-biggest economy have been removed. European companies could save around a billion euros in duties each year. (01.02.2019)

Donald Trump's threat of auto tariffs has finally spurred EU leaders into action on a new trade deal with Washington. As the US president seeks reelection next year, will Europe hold more clout in upcoming negotiations? (18.04.2019)