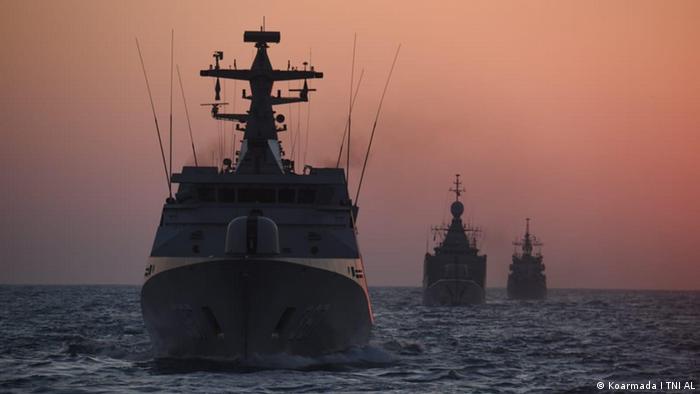 On January 11, three Indonesian naval cruisers forced more than 50 Chinese ships out of waters in the northern Natuna Sea between the Malaysian peninsula and Borneo.

The Chinese fleet, consisting of fishing and coast guard vessels, had been present in the area — where the Indonesian Exclusive Economic Zone (EEZ) and China's claims within its so-called nine-dash line in the South China Sea overlap — for some two weeks. Chinese claims of sovereignty in the area are not internationally recognized.

But the conflict itself is not new: Four years ago, the Indonesian navy fired on a Chinese fishing boat in the area, which China claims is a "traditional Chinese fishing zone." In December 2018, Indonesia opened a new military base in the Natuna Sea.

Then, as now, Indonesian authorities turned to Japan for help in defending itself against Chinese claims. Earlier this month, on January 10, Indonesian President Joko "Jokowi" Widodo met with Japanese Minister of Foreign Affairs Toshimitsu Motegi in Jakarta to discuss closer cooperation "related to the South China Sea."

Motegi promised Widodo technical assistance for the Indonesian coast guard within one month's time, as well as financial assistance for islands in the Natuna Sea. Last year, Japan invested some $22.7 million (€20.6 million) in the development of fishing ports on six islands, including those in the Natuna Sea. Tokyo also promised to invest a further $7.3 million in the construction of a Natuna fish market. According to Motegi, construction is scheduled to commence in February.

At the same time, Japanese investor Masayoshi Son, who also attended the January 10 meeting, presented his own investment plan. According to Bloomberg, a news agency, Son is ready to invest between $30 and $40 billion in Indonesia's new capital to be located on the island of Borneo.

Son, a billionaire with Korean roots, has already been put on the Borneo construction steering committee, with building set to begin this year. The sum being offered by Son is extremely high, especially considering the fact that total cost estimates for the project are in the neighborhood of $34 billion. Still, Son's offer is being taken very seriously by his Indonesian partners: His SoftBank Capital Group has already used the mobile telecommunications firm Grab and the online sales platform Tokopedia to pour $4 billion into the island country. 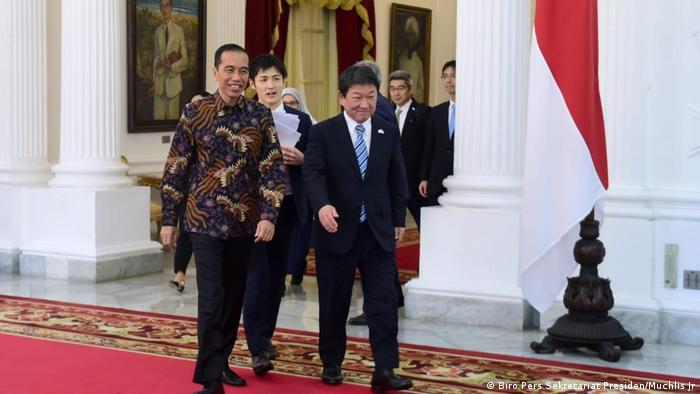 Japanese private and government investment in Indonesia has turned the archipelago into a new theater in Tokyo and Beijing's ongoing struggle to win influence in Asia. One of the main areas where both are competing head to head is investment in the construction of infrastructure projects such as roads, ports and rail lines.

China has used its Belt and Road Initiative (BRI) and the Asian Infrastructure Investment Bank (AIIB), founded in 2016, to shore up its position. Japan has countered with its own "Free and Open Indo-Pacific Strategy" for "high-quality infrastructure projects," using the Asian Development Bank in Manila to further its position. Japan hopes the strategy will allow it to prevent Chinese control over ocean transport routes in the region.

Japan has been one of Indonesia's largest investors since the 1970s. Over the past 10 years, Japan has invested some $31 billion in the country, putting it just behind Singapore for the decade. However, China is now Indonesia's third-largest investor. That is mainly thanks to the fact that China in 2015 won a $5.5 billion contract to build a 150-kilometer-long (93-mile-long) super-high-speed rail line between Jakarta and Bandung on the island of Java. The Chinese beat out a Japanese company for the contract.

Last year, however, that blow to Tokyo was softened when a Japanese company was awarded a $4.2 billion contract for the construction of a new rail line between Jakarta and Semarang, the capital of Central Java province, and an upgrade of the existing railtrack between Semarang and Surabaya, the capital of East Java province.

Indonesia is also a key market for Japanese automobile manufacturers. According to the Tokyo-based automotive market research outfit MarkLines, the Toyota Group sold more than half of the 940,000 automobiles purchased in Indonesia in the fiscal year 2019.

Increased cooperation with Japan could encourage Indonesia to push back against expanding Chinese influence in the region more vigorously. It is even conceivable that it could join other countries along the nine-dash line to create a united front against Beijing's expansionist plans.

Yet such a move could also threaten Tokyo's attempts to come to a common agreement with its powerful regional rival China. Both countries, undoubtedly the most influential in the region, have recently initiated a policy of rapprochement after years of icy relations — a shift prompted in large part by the current trade war raging between China and the US. Japanese Prime Minister Shinzo Abe, for instance, visited Beijing for talks with Chinese President Xi Jinping in the fall of 2018, and Xi is expected to visit Tokyo this April. This past Monday, Japanese Minister of Foreign Affairs Motegi attempted to tamp down potential Chinese concerns about his country's Indonesian investments when speaking to parliament. In the address, Motegi said he hoped a peaceful solution, based on international law, could be achieved in the issue of competition between Beijing and other Southeast Asian countries.

The People's Republic of China (PRC) has laid claim to some 80% of the resource-rich South China Sea. In recent years, Beijing has caused international consternation by constructing military bases on a number of islands and reefs in the region.