England international Jadon Sancho was officially unveiled as a Manchester United player on Friday. The 21-year-old scored 50 goals in 137 games over four seasons for Borussia Dortmund and cost a reported €85 million. 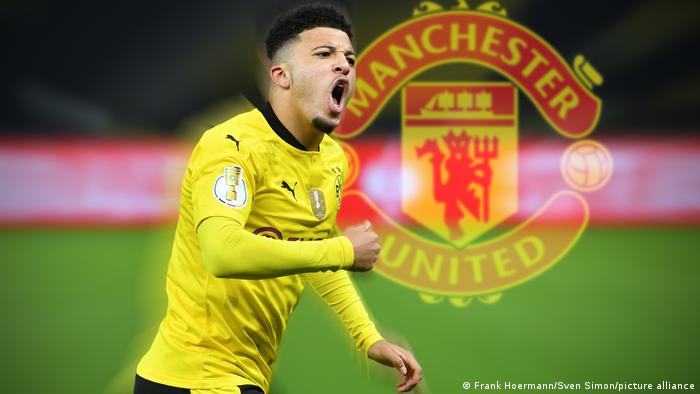 The most protracted transfer saga of the last two summers is finally complete: Jadon Sancho is a Manchester United player.

The 21-year-old England international was officially unveiled in Manchester on Friday after completing a move from Borussia Dortmund reported to be worth €85 million ($100m / £72.5m), rising to €90 million with bonuses and add-ons.

"Jadon epitomizes the type of player I want to bring to the club, he is a forward player in the best traditions of Manchester United," said head coach Ole Gunnar Solskjaer.

"He will form an integral part of my squad for years to come and we look forward to seeing him blossom. His goals and assists records speak for themselves and he will also bring tremendous pace, flair and creativity to the team."

Sancho himself said: "I’ll always be grateful to Dortmund for giving me the opportunity to play first team football, although I always knew that I would return to England one day. The chance to join Manchester United is a dream come true and I just cannot wait to perform in the Premier League."

United get their man

United wanted to sign Sancho in the summer of 2020 but refused to meet Dortmund's asking price of €120 million. Instead, Sancho extended his contract by one year until 2023, ensuring that the Bundesliga side could still command a sizeable asking price this time around.

"We would have liked to have got a few euros more for him but the market simply doesn't allow that at the moment," said Dortmund's head of professional football Sebastian Kehl earlier this month.

"Jadon has been a fantastic player for Borussia Dortmund, we had a lot of joy and great success with him. Without him, we wouldn't have finished last season so strongly. He made a huge contribution to our cup win and our qualification for the Champions League.

"We wish him all the best in Manchester." 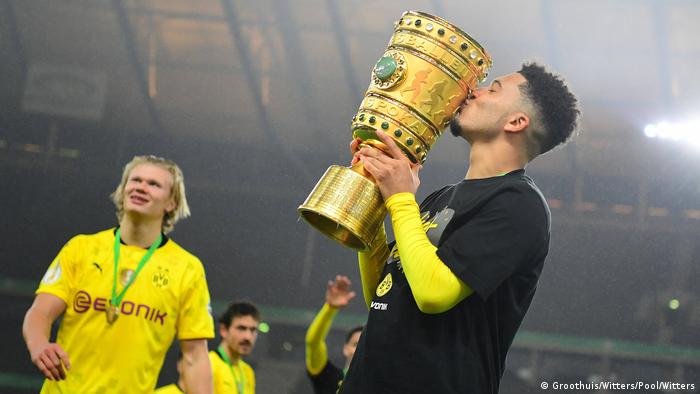 Success in yellow, frustration in white, future in red

After joining Dortmund from United's local rivals Manchester City as a 17-year-old in August 2017, Sancho went on to make 137 appearances for the Black and Yellows in all competitions, scoring 50 goals and assisting 64 more.

Last season, he played a vital role as BVB qualified for the Champions League and won the German Cup. He found the net in every round except the semifinal (in which he still set up two goals) and scored twice in a 4-1 win over RB Leipzig in the final.

This summer, he was included in the England squad for the European Championships but was largely ignored by head coach Gareth Southgate, much to the bemusement of observers in Germany. He only made one start – against Ukraine in the quarterfinal – and was brought on to take a penalty in the final, which he missed as England lost to Italy.

Manchester United finished second in the Premier League last season, 12 points behind local rivals Manchester City, and were beaten in the Europa League final on penalties by Villarreal. Head coach Ole Gunnar Solskjaer has been criticized for his team's inability to break down defensive opposition and will hope that the arrival of Sancho will change that.

Opinion: Jadon Sancho can take United up a gear

In four years with Borussia Dortmund, Jadon Sancho has proven his qualities as a world class attacking talent. He can bring those much-needed qualities to Manchester United, too, if used correctly, writes DW's Matt Ford.