Italian Interior Minister Matteo Salvini has announced plans for a census of the Roma community. While those deemed to be foreign could be deported, he said, Italian Roma would "unfortunately" be allowed to stay. 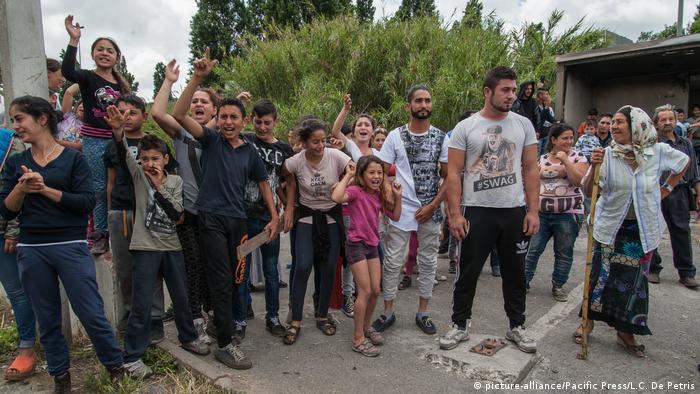 Salvini announced his plans to draw up a "register" of the Roma community during a television question-and-answer session.

The leader of Italy's far-right League party said the project was aimed at studying the overall situation of Roma in Italy, rather than to identify and keep records of individual Roma.

The census would mean Roma who were in the country illegally could be deported, Salvini said. But, he noted regretfully: "As for the Italian Roma, unfortunately, one has to keep them at home."

A census, Salvini told the regional television channel TeleLombardia, would allow the authorities to see "who, and how many" Roma there were.

"I've asked the ministry to prepare a dossier on the Roma question in Italy," he said Salvini, adding that the current situation with the Roma — some of whom prefer to be called Gypsies — was "chaos."

Salvini made his comments while taking questions from television interviewers and members of the public who were complaining about migrants, crime and the arrests of a number of Roma women for pickpocketing at Milan's central train station.

He later said his main intention was to protect Roma children "who aren't allowed to go to school regularly because they prefer to introduce them to a life of crime."

Salvini's televised comments drew reproach from opposition lawmakers, pointing to Italy's "terrible" history with a census of Jews during the fascist era of Benito Mussolini.

"You can work for security and have respect for rules without becoming fascist," Democratic lawmaker Ettore Rosato tweeted. "The announced census of Roma is vulgar and demagogical."

In previous comments, Salvini has called for Roma camps to be bulldozed and accused people from the community of preferring crime to work.

Italy's Roma community — which numbers between 130,000 and 170,000 — includes many people originally from Romania and the former Yugoslavia.  A 2015 poll by Pew Research found that 86 percent of Italians have unfavorable views of Roma people.

Salvini’s League shares power in a populist alliance coalition with the anti-establishment Five Star Movement. As interior minister he has pursued a tough policy on immigration since coming to power. Most notably, he refused entry to the rescue ship Aquarius last week, as it was carrying 630 migrants who were picked up off the coast of Libya.

President Hollande has acknowledged France's "broad responsibility" for the internment of Roma under the Vichy regime. Hollande was making the first-ever presidential visit to the main camp where Roma were held. (29.10.2016)