The European Roma Institute for Art and Culture will showcase the art and culture of the continent's largest minority, aiming to tackle prejudice against the group. The European Roma Institute for Art and Culture (ERIAC) was launched on Thursday at Germany's Foreign Ministry. It plans to opens its doors in Berlin this fall. Supporters include the Council of Europe and Hungarian-American billionaire George Soros through his Open Society Foundation.

One of the aims of the center is "focusing on what Roma culture can contribute to open the eyes of people across Europe," Council of Europe chief Thorbjorn Jaglandy told AP news agency. A further goal is "empowering the Roma people itself to make (it) proud of its own history and culture." 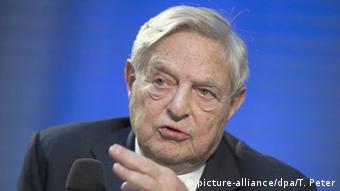 Europe's Roma minority is estimated to constitute some 12 million people, making it the continent's largest minority group. It has, however, suffered centuries of discrimination.

Berlin appears to be a suitable spot for the center. "The location of Berlin for the seat of the European Roma Institute for Arts and Culture sends a clear message," said Romani Rose, head of the Central Council of German Sinti and Roma, as reported by the Romea Website. "In the center of Europe, in the most culturally vibrant European capital, there is a place to celebrate the resilience and creative power of Roma communities and to challenge the pervasive prejudice and stereotypes against Roma."

Billionaire investor George Soros, an 86-year-old Holocaust survivor, has grabbed global attention as a promoter of liberal causes. He has also reaped the wrath of the right-wing Hungarian government and authoritarian politicians in other European countries.

"I am ideologically opposed to the people who are waging that war and I stick to my principles, stand up for it, and I think we shall prevail," he said at the launch of the center on Thursday.

Across Europe, Roma and Sinti are formally marginalized and frequently abused. International Romani Day is one way of drawing attention to that. (08.04.2016)

Sinti and Roma people from around Europe have gathered in the Auschwitz concentration camp to remember victims of the Nazi Holocaust. August 2 is designated as Roma Holocaust Memorial Day. (02.08.2015)

Living with ghosts in Berlin

When, 72 years ago, the guns of WWII fell quiet across Europe, Germany was faced with the enormous task of dealing with what it had done. A task, which as Tamsin Walker found out on a walk through Berlin, is ongoing. (12.05.2017)