Who are Italy's two leading populist parties: Five Star Movement and the League?

Two populist groups have emerged as the main forces in Italian politics following the March elections. The Five Star Movement has developed out of a protest group and the League has stepped up to head the center-right. 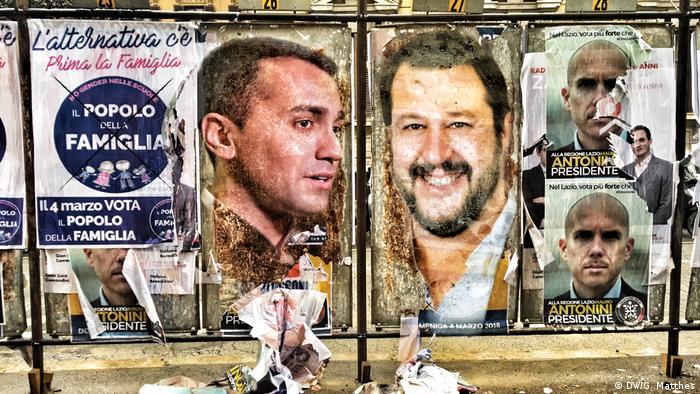 The Five Star Movement began in 2009 as a protest network founded by comedian Beppe Grillo, aiming to overthrow the political class.

By September 2017, Grillo had stepped aside for 31-year-old Luigi Di Maio to become the movement's leader and candidate for prime minister in the elections.

Di Maio approached the March 4 elections as head of a more traditional party, softening the anti-euro rhetoric and backing off plans for a referendum on Italy's membership of the single currency.

Five-Star showed well in poorer regions of the south, especially among the unemployed. In Sicily, it took almost 50 percent of the vote.

The day after the election which saw it take around 32 percent of the total vote, Di Maio said: "We are a political force that represents the whole country," adding: "This is why we are taking the responsibility of governing Italy."

Triple the vote but without a majority

The Five Star Movement tripled the number of its elected lawmakers in the March vote, becoming the largest parliamentary group, but without enough votes to form a majority government. It is expected to be the largest single party in Italy's lower house, with 216-236 seats, well below the 316 seats needed for a majority. In the Senate it was expected to take between 102 and 122 seats where the threshold for a majority is 158.

"This vote was about the unresolved problems of this country," Di Maio said. "That has nothing to do with ideologies," saying that the Movement's identity was beyond that of "the traditional political schemes of right and left."

"There can be no government without Five Star, everyone will have to come and talk to us," lawmaker Alessandro Di Battista said. The movement options for a coalition appear to be with the far-right League which made signifcant gains; with the center-left Democratic Party (PD) or as the lead in a multi-party alliance.

The Five Star and the League share a common hostility to Europe's fiscal rules, big business and the euro. But on the campaign trail, De Maio said he would "defeat the friends of (Viktor) Orban, the AfD and (Marine) Le Pen," referring to the League's far-right and right-wing populist allies in Hungary, Germany and France. 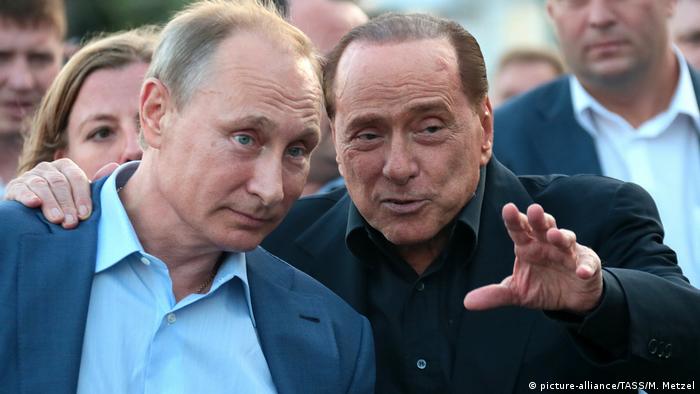 Looking toward the Kremlin

The Movement shares a pro-Kremlin outlook with the more right-wing League. While Grillo started out decrying corruption in Russia, especially when journalist Anna Politkovskaya was murdered in 2006, he and some of his close circle changed their opinions over time to support policies of Russian President Vladimir Putin, including in Syria.

The Movement's foreign policy spokesman Manlio Di Stefano described the shelling of Aleppo as a "liberation" of the city. He has called for an end to EU sanctions against Russia and criticized NATO as "aggressive."

Commentators have suggested the pro-Russia move came from the Italians and was not an overture from Moscow. EU sanctions on Russia over its invasion of Ukraine's Crimea have hit parts of the Italian economy. Italy is Russia's second most important commercial partner in the EU, after Germany. The state-owned energy company, ENI, has long-term agreements with Gazprom to import Russian gas into Italy.

The Five Star Movement's focus on national sovereignty, anti-EU sentiments combined with calls for national defense-spending cuts and an anti-NATO stance have been well reported in Russia.

But the Movement's fluid policy positions have made it a less attractive partner for the Kremlin that the longer-term associations it has enjoyed with elements in the League and center-right coalition. Those include a long-term friendship with former premier Silvio Berlusconi, demonstrated recently when the Italian sent the Russian President a birthday present of a duvet cover of the two men shaking hands. 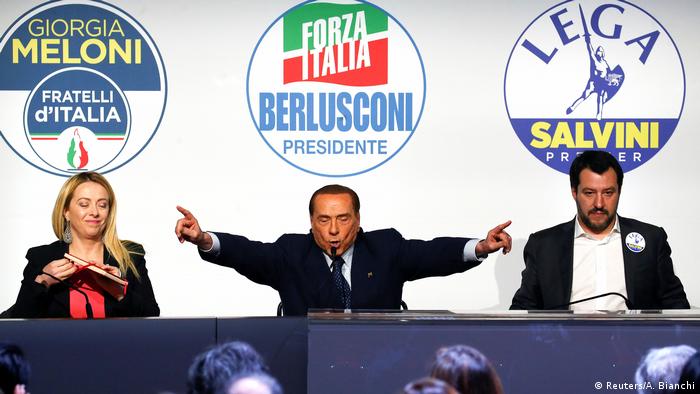 In previous coalitions, former premier Silvio Berlusconi has led but this time the role falls to League leader Matteo Salvini

The League plus three

While the Five Star Movement's base is in the south of Italy, its main opponent in forming a government came out of the north.

Matteo Salvini, leader of the League (Liga — formerly Northern League or Liga Nord) party has a strong anti-migrant, anti-EU, anti-euro stance and presented an "Italy first" message to voters, many of whom the party addressed via online social media sites rather than through mainstream media. "Thank God we have the internet, thank God we have Facebook," Salvini said after intial reports gave the League 17 percent of the vote.

Inside Europe: Immigration and the Italian elections

He said the pre-electoral agreement between his League and former premier Silvio Berlusconi's Forza Italia (Go Italy) was that "the leader of the first party inside the coalition would have the honor of dragging this country out of the swamp." Previous coalitions between the parties were dominated by Forza Italia.

According to provisional results, the four coalition parties together gained 37 percent of the vote. Salvini led the League to take 17 percent, ahead of Forza Italia's 14 percent, Giorgia Meloni's Fratelli d'Italia (Brothers of Italy) with 4.3 percent and Raffaele Fitto's Noi con lItalia (We with Italy) with just over one percent.

Salvini was quick to announce his intentions on the morning after the elections, saying: "The center right is the coalition that won and that can govern."

However, projections suggest that the center-right coalition could end up with between 247 and 257 seats in the 630-seat lower house and 128 to 140 of the 315 elected seats in the Senate.

The League began as an independence movement aiming to separate the industrial north of Italy from the necessity of supporting the poorer regions of the south. It dropped the "Northern" element in its name when it found support in other parts of Italy.

The League has a strident anti-immigrant policy. In campaigning, it promised to introduce mass deportations of an estimated 400,000 migrants back to their countries of origin, including Nigeria, Tunisia and Morocco. It also promised to oblige asylum courts to disregard the circumstances of a migrant's journey in any asylum deliberation. 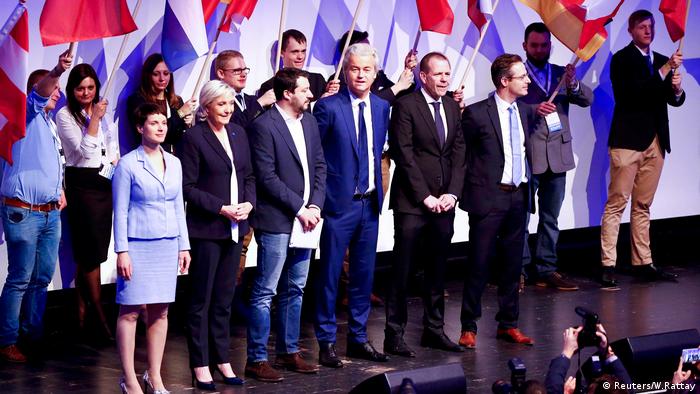 Matteo Salvini with colleagues at the Koblenz meeting of far-right, European politicians in January 2017

Support at home and abroad

The League's main support came in regions in the north which have seen the largest registration of foreigners in recent years.

Salvini is a close ally of France's far-right National Front leader Marine Le Pen, who greeted the result as "the reawakening of the peoples." In the Netherlands, the head of the anti-EU populist PVV, Geert Wilders also greeted the result.

Rejecting austerity policies imposed by the EU, the League wants to see protection for products made in Italy, it also retains a strong, anti-euro position.

"From the start we have been saying that the euro was a wrong currency," Salvini said the day after the election. "The single currency system is doomed to end, that's what common sense suggests."

The Day with Brent Goff: Arrivederci to the Left