Italy has said it will donate more ships and equipment to help the Libyan coast guard intercept Europe-bound migrants on the Mediterranean Sea. The news came amid reports of another shipwreck. 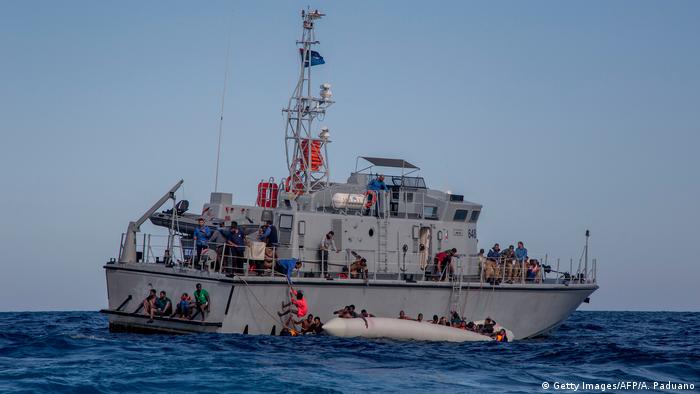 Italy's new government wants Europe-bound migrants found in boats coming from Libya to be taken back to the North African country, rather than allowing them to move on to Europe.

In recent weeks, charity-run ships with rescued migrants onboard have been refused permission to dock in Italian ports.

The Italian government has denied that conditions in Libya are too dangerous for the migrants.

Rome's announcement came amid reports that 63 migrants were missing after an inflatable boat sunk off the coast of Libya. A spokesman for the Libyan navy told the Agence France-Presse news agency that 41 migrants who were wearing life jackets had been rescued. According to survivors, there had been 104 people on board when the boat sank some 50 kilometers (31 miles) east of Tripoli.

A "Salvini Plan," named after Interior Minister Matteo Salvini, was drawn up at a meeting of Italian and Libyan officials on Monday to "urgently strengthen" Libyan forces fighting illegal migration, according to the ANSA news agency.

On Sunday, Salvini called for a Europe-wide alliance against "mass immigration"at a meeting of his far-right League party on Sunday. "The decision to open or close ports is taken by the interior minister," he said.

Italy provided Libya with four vessels last year, but the current resources are regarded as inadequate to the task of intercepting migrants.

Migrant arrivals have fallen by 96 percent since 2015 when hundreds of thousands of people made their way to Europe from North Africa and the Middle East.

A ship operated by a Spanish NGO will be allowed to dock in Barcelona after rescuing 59 migrants in the Mediterranean Sea. The NGO drew ire from Italy's interior minister who refused port access to the ship. (01.07.2018)