Italy election: Who is Giorgia Meloni, the star of the far right? | Europe | News and current affairs from around the continent | DW | 26.09.2022 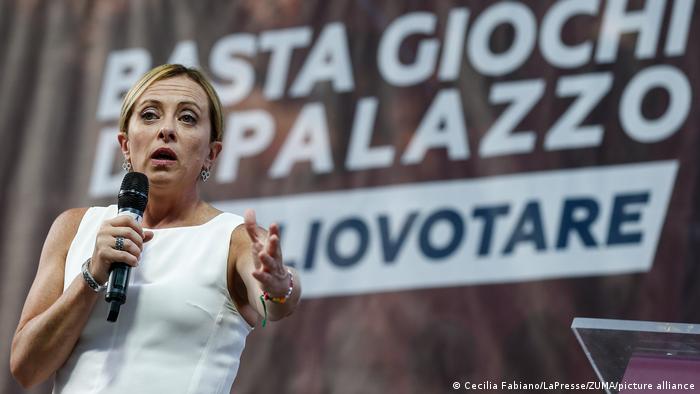 In Rome's Via Della Scrofa, not far from the seat of parliament in the historic center, a stone tablet and a dried-up wreath commemorate Alberto Marchesi, an anti-fascist resistance fighter executed by the German SS in the Ardeatine Caves in 1944. The plaque hangs to the left of a wide archway in the facade of the yellow building.

In a jarring juxtaposition, a much smaller Plexiglas plaque to the right of the entrance indicates this is the headquarters of the neofascist Brothers of Italy party.

Neofascist parties have been based at Via Della Scrofa 39 since 1946— the Italian Social Movement, the National Alliance and now the Brothers of Italy, named after the first verse of the Italian national anthem. Party leader Giorgia Meloni has made a point of keeping the office in the historic building, which was once frequented by followers of former fascist leader Benito Mussolini.

Meloni said she has an unbroken relationship with history. Dictator Mussolini was "a complex personality," she has said in interviews. Even today, many Italians don't think everything was bad under Mussolini.

Meloni remains ambiguous about past

Meloni has not clearly distanced herself from fascism; in her 2021 autobiography, she wrote that she is aware she is navigating a political minefield. "We are children of our history. Of our whole history. As is the case with all other nations, the path we have traveled is complex, much more complicated than many want to make known," she wrote. 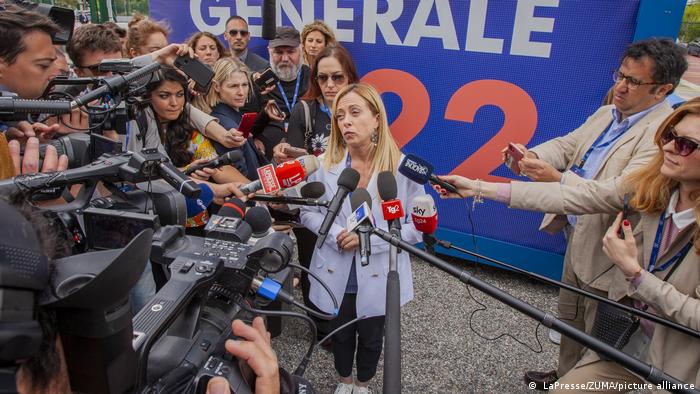 She does, however, reject the cult of the leader common to fascism, she added. But when Meloni holds press conferences at the party headquarters, a fascist symbol is always in plain view — the logo of the Brothers of Italy.

It's a stylized flame in the Italian national colors — green, white and red — an eternal flame that burns figuratively at Mussolini's grave. "I have nothing to apologize for in my life. But in two out of three television discussions, I'm supposed to talk about history and not about current politics. I don't think that's right."

Last fall, in preparation for the election campaign leading up to the vote on September 25, Meloni sent out internal memos to party groups instructing them to stop making extreme statements, to refrain from making references to fascism and, above all, to refrain from the so-called Roman salute, a gesture with an outstretched right arm which resembles the Hitler or Nazi salute.

The politician wants to move the party from the political fringes, from the extreme right to center right. Meloni is seeking to remold the party and pitch it as a conservative champion of patriotism that appeals to the middle class to form a coalition with other right-wing parties — Matteo Salvini's League and Forza Italia, led by former premier Silvio Berlusconi. 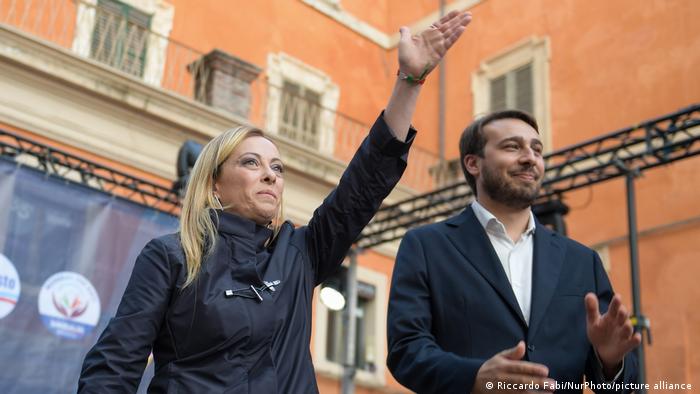 Meloni has been telling party members to drop the Roman salute

"If she has made it this far in Italy, it's thanks to all those who have whitewashed her — from the media who insist on calling Salvini and Meloni center right to Berlusconi and the Grillini [followers of the left-leaning 5-Star Movement — Editor's note], who brought her to power, and a disoriented center left that underestimated and legitimized her," said Alba Sidera, a Spanish journalist who has for years researched the Italian far right. "Meloni did not suddenly appear out of nowhere. She has been preparing to become prime minister for years."

Born in 1977, Meloni joined the youth wing of the neofascist Italian Social Movement party when she was 15 to take a stand against the far-left terror that plagued Italy during that era. She later led the student branch of the far-right National Alliance, was elected to the Italian Parliament's Chamber of Deputies in 2006, and became Italy's youngest minister two years later.

At the age of 31, she took over the youth portfolio in Berlusconi's government. Ten years ago, Meloni co-founded the Brothers of Italy, which she has led since 2014. In 2020, she also took over the chairmanship of the EuropeanConservatives and Reformists party, which includes, among others, the Polish ruling party, PiS. 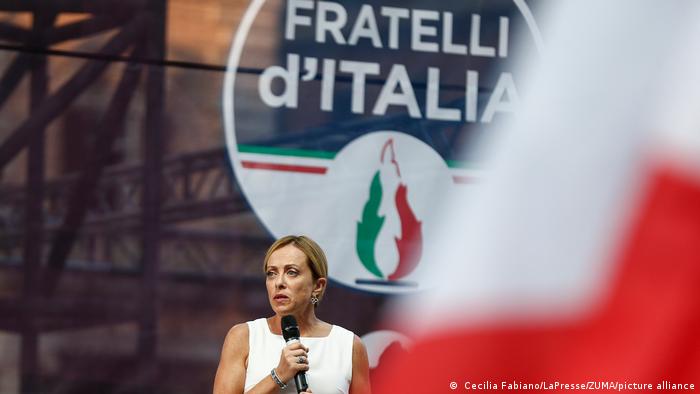 The party logo of the Brothers of Italy is unmistakable

Meloni headed into the election campaign with the populist slogan "Italy and Italian people first!" She has called for more family-friendly benefits, less European bureaucracy, low taxes and a halt to immigration.

She wants to renegotiate EU treaties, and her party rejects abortions and same-sex marriage. In terms of economic and foreign policy, the trained foreign language secretary is relatively inexperienced. She has spent most of her political career as a member of parliament and a party official.

Meloni has kept her cool amid harsh criticism from the left-wing political camp. Ginevra Bompiani, a writer, told La7 television that "Meloni is a real jerk.... she is surrounded by Nazis." To which Meloni replied on Facebook that she was tired of being portrayed as "the black lady."

Her opponents, she said, are only desperate because she is so successful. Associating her with Mussolini, Hitler or Putin is ridiculous, she said. "After all, I support Ukraine."

In a TV interview, she once told her critics to take a look at France and Germany, where far-right populist parties have been successful and no one turned that into a scandal. "Why should it be any different in Italy?" The German party Meloni referred to is the Alternative for Germany (AfD), which lost votes in the 2021 federal election and hovered at just over 10% of the vote. 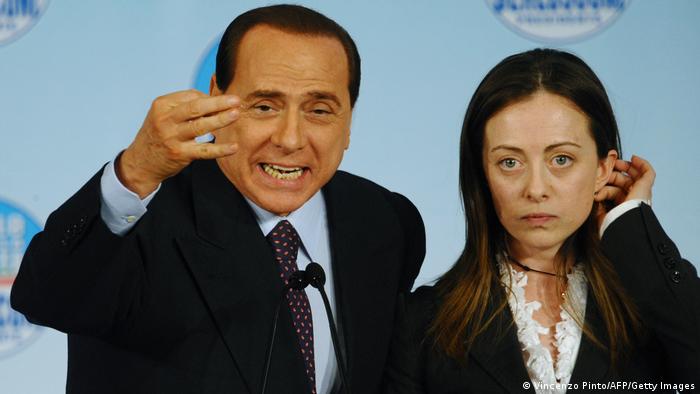 Meloni is counting on Italian leadership to transform the EU into a loose economic union. French President Emmanuel Macron has been weakened by losing his majority in parliament, she said. And in a recent interview with Italian public broadcaster RAI, she accused German Chancellor Olaf Scholz of lacking confidence, adding that Scholz certainly does not have the same strength as his predecessor, Angela Merkel.

That is precisely where she would come in, said Meloni.

The disturbing images of neofascist party leaders storming the headquarters of Italy's oldest trade union is a sign that fascism is still alive and kicking, says DW's Giulia Saudelli.

Italy election: What you need to know