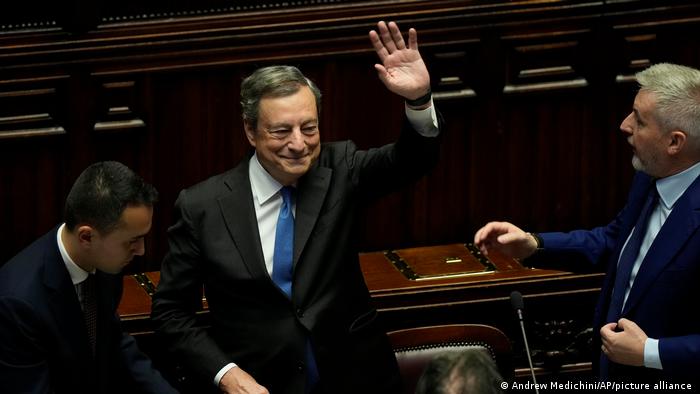 Draghi is seen as a centrist, technocratic leader

Italy's President Sergio Mattarella has signed a decree dissolving the country's parliament. This now paves the way for fresh elections to be held.

"The dissolution of the parliamentary chamber is always the last choice," Mattarella said, noting the political circumstances that led to the move.

Earlier on Thursday, Italian Prime Minister Mario Draghi tendered his resignation while meeting with  Mattarella, as efforts to save Italy's unity government faltered following a failed confidence vote in the Senate.

He announced his intention to resign during an address to Italian Parliament. Mattarella accepted the resignation.

What is expected now?

Mattarella is now expected to announce new elections, which will likely take place in the fall. The president said that elections must be held within 70 days.

"The period we are going through does not allow for any pause in the (government) action which is needed to counter the economic and social crisis, and rising inflation," the president said in a short address.

State broadcaster RAI said that national elections will be held on September 25.

Mattarella had asked Draghi to stay on for now as the head of a caretaker government.

Draghi thanked the Italian president for his trust. "We must be very proud of the work we have done on behalf of the president of the republic in the service of all citizens," he said and called on lawmakers to continue working with purpose in the weeks that follow.

"A major talking point in the electoral campaign will be migration, with the far-right parties all together at 40% of the vote in the polls right now," Milan-based journalist Alessio Perrone told DW. "Russia will feature prominently in the campaign, too."

The government collapse caused a selloff in Italy's financial markets.

What led us here?

Draghi had attempted to resign last week, after the populist 5-Star Movement refused to support him in a confidence vote. Mattarella refused his resignation, however, with Draghi attempting to form a broad unity government one last time.

On Wednesday, Draghi said he was willing to stay on during remarks to the Italian Senate. He appealed to 5-Star and other parties to get behind him in a "new pact," citing challenges such as the war in Ukraine and inflation.

The 5-Star Movement were the largest vote-earners in the 2018 election. Draghi would have been able to form a government without their participation, but he had vowed to govern the widest possible coalition.

The 5-Star Movement has called on Draghi to adopt its platform on issues such as tax credits and the minimum wage. The party said after Draghi's address on Wednesday that they were not satisfied with his appeals to stay in the coalition.

At the same time, the right-wing League and Forza Italia parties ruled out a governing coalition with 5-Star, further complicating efforts to rebuild a government.

Draghi remains a popular leader with much of the Italian public. Following his first resignation last week, political and business leaders, doctors' associations and ordinary Italian citizens urged Draghi to stay on for the sake of stability.

Draghi first became Italy's prime minister in February 2021, and navigated the country through the COVID-19 pandemic. Earlier, he was the head of the European Central Bank from 2011 to 2019, during which he dealt with the eurozone crisis.