Israeli politicians have accused Poland's premier of distorting history and anti-Semitism following comments made about "Jewish perpetrators" during World War II. The countries have been at odds over a new Holocaust law. 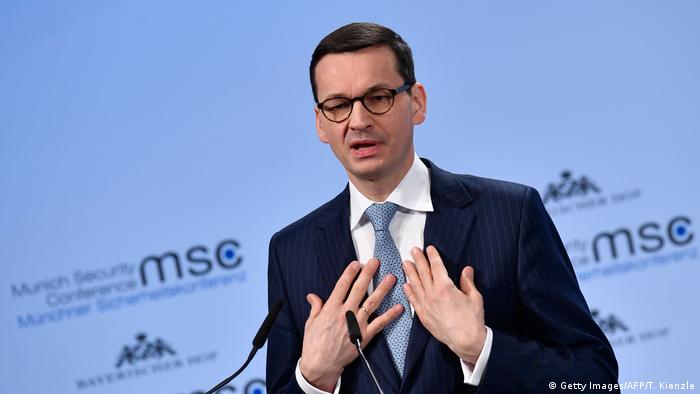 Israeli politicians have lashed out at Poland's prime minister over comments he made comparing "Polish perpetrators" of the Holocaust to supposed "Jewish perpetrators."

It's the latest spat between Poland and Israel over interpretations of history after Warsaw's ruling Law and Justice (PiS) party last month passed a law against public statements that falsely and intentionally attribute Nazi crimes to Poland under the German occupation during World War II.

'There were Jewish perpetrators'

Morawiecki was responding to a question from an Israeli journalist, who asked whether Poland would consider him a criminal after he reported that Polish neighbors had betrayed his Jewish family to the Gestapo, Nazi Germany's secret police.

He reiterated that the law was passed to make clear that "there were no Polish death camps... There were German Nazi death camps.

"But we cannot agree with mixing perpetrators with victims, because it would be first of all an offense to all the Jews and all the Poles who suffered greatly during World War II."

Netanyahu, who like Morawiecki is at the Munich Security Conference, said he would speak urgently with the Polish premier. "There is a problem here of lack of understanding of history and lack of sensitivity to the tragedy of our people," Netanyahu said.

"The comments of Prime Minister Mateusz Morawiecki during a discussion in Munich were by no means intended to deny the Holocaust, or charge the Jewish victims of the Holocaust with responsibility for what was a Nazi German-perpetrated genocide," Joanna Kopcinska said.

Yair Lapid, head of the centrist opposition Yesh Atid party, said Israel should recall its ambassador over such "anti-Semitism of the oldest kind."

"The perpetrators are not the victims. The Jewish state will not allow the murdered to be blamed for their own murder," said Lapid.

"The blood of millions of Jews cries from the earth of Poland over the distortion of history and the escape from blame. Jews were murdered in the Holocaust and Poles took an active part in their murder," Gabbay said. "The government of Israel has to be a voice for the millions of murdered and strongly denounce the Polish prime minister's words."

German Chancellor Angela Merkel has avoided wading into an international war of words over a recent Polish law criminalizing suggestions Poland was complicit in the Holocaust. The US and Israel have not been so reticent. (11.02.2018)