The historic deal was brokered by former US President Donald Trump and sees Muslim-majority Kosovo recognize Jerusalem as the capital of Israel. 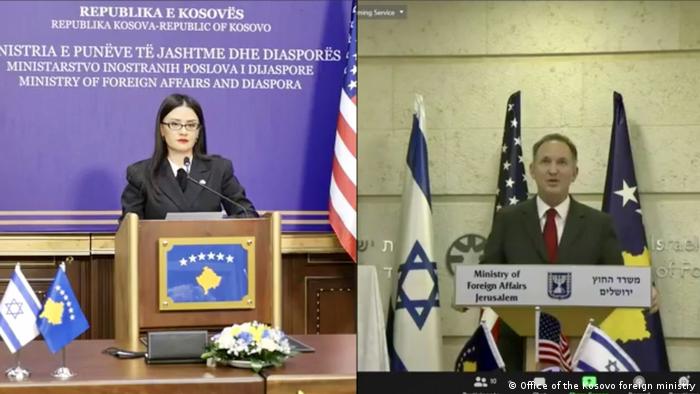 Kosovo and Israel have formally established diplomatic relations, with a US-brokered agreement requiring Kosovo to set up an embassy in Jerusalem.

Kosovo Foreign Minister Meliza Haradinaj-Stublla and Israeli Foreign Minister Gabriel Ashkenazi celebrated the deal in a virtual ceremony on Monday, with both leaders signing documents in their respective countries.

"Today we are making history. We are establishing diplomatic relations between Israel and Kosovo," said Ashkenazi.

"We mark a new chapter in the historical bond between our countries," said Haradinaj-Stublla.

A joint struggle for international recognition

Haradinaj-Stublla said that Kosovo and Israel have "witnessed a long and challenging path to existing as a people and becoming states."

Kosovo declared its independence from Serbia in 2008, with many countries still unwilling to recognize the southeastern European nation.

Israel has also struggled for international recognition since its independence in 1948, and faces a boycott from multiple Arab and Muslim-majority countries, such as Lebanon and Syria.

In Kosovo, finally being able to say goodbye

Which other Muslim-majority countries have ties with Israel?

The deal was brokered in September, when Kosovo Prime Minister Avdullah Hoti met Serbian President Aleksandar Vucic in the White House at the invitation of former President Donald Trump.

The Trump administration brokered multiple peace agreements between Israel and several Muslim-majority countries, known as the Abraham Accords, in its final months in office.

So far, Israel has normalized relations with the UAE and Bahrain, along with Sudan and Morocco.

Will the new US administration continue the Trump policy?

New US President Joe Biden has indicated that he would like to build on the normalization deals brokered by his predecessor.

"We think that Israel normalizing relations with its neighbors and other countries in the region is a very positive development, and so we applauded them, and we hope that there may be an opportunity to build on them in the months and years ahead," said recently confirmed Secretary of State Antony Blinken.

The Palestinian president has said the US decision undermined the two-state solution to its conflict with Israel. Abbas also said the Palestinians will not accept a "biased" US as the sole mediator in the peace process.