The Palestinian Authority has stepped down from a key Arab League role over the bloc's failure to condemn Bahrain and the UAE's normalization of ties with Israel. Its foreign minister called any such deal dishonorable. 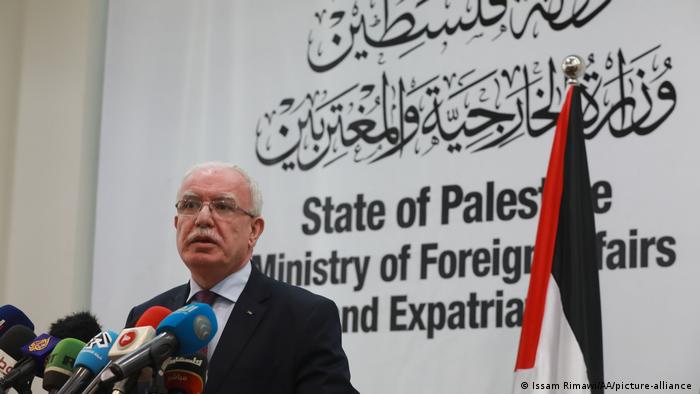 The Palestinian Authority quit its rotating chairmanship of Arab League meetings on Tuesday, with Foreign Minister Riyad al-Maliki saying his government no longer wanted the position.

Last month, the Palestinians were unable to persuade the Arab League to condemn member nations that break ranks and normalize relations with Israel.

Bahrain and the United Arab Emirates signed deals in Washington on September 15 that normalize ties with Israel, a move the Palestinians view as a blow to their efforts to end the Israeli occupation and achieve an independent state.

"The state of Palestine ... refuses to record in its history the association of its presidency with the regression in values and principles that was evident in the last meeting of the council of foreign ministers," Maliki told reporters in Ramallah.

'No honor' in normalization

The Palestininans were supposed to chair meetings of the council, which brings together foreign ministers from the 22-member regional bloc, until March.

"Palestine has decided to concede its right to chair the League's council at its current session. There is no honour in seeing Arabs rush towards normalization during its presidency," Maliki said.

After his initial remarks, Maliki read from a letter he said he sent to the Arab League secretary-general, Ahmed Aboul Gheit, informing him of Palestine's decision and criticizing the UAE and Bahrain.

The UAE's deal with Israel had "created a deep crisis in the Arab League" and the move was followed "by a similar collapse by the Kingdom of Bahrain," Maliki said, quoting from the letter.

The UAE and Bahrain's decision to normalize ties with Israel broke from years of Arab League policy on the Palestinian-Israeli conflict. The Palestinians called the deal a "betrayal."