The first direct commercial flight between Israel and Morocco landed with US presidential son-in-law Jared Kushner on board. The Jewish and Arab countries agreed to resume diplomatic ties earlier this month. 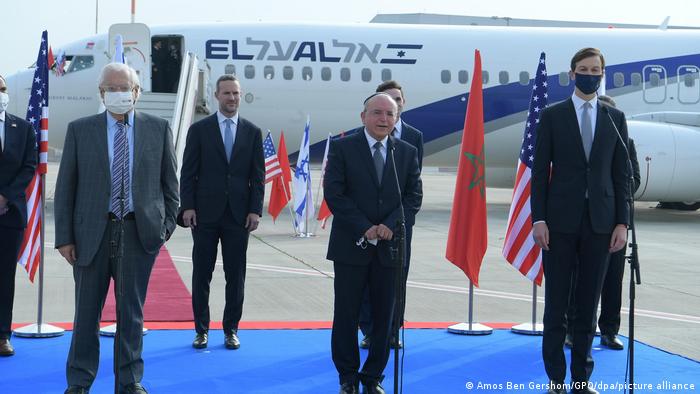 The first direct commercial flight between Israel and Morocco took off from Tel Aviv on Tuesday and landed in the Moroccan capital of Rabat. The landmark trip comes after the two countries agreed to establish full diplomatic ties in a US-brokered deal earlier this month.

US President Donald Trump's son-in-law Jared Kushner and Israeli National Security Adviser Meir Ben Shabbat were both on board the El Al flight to Rabat, where they are expected to sign a series of agreements.

They are also scheduled to meet with Morocco's King Mohammed VI, who has said Morocco would remain an advocate for Palestinians.

"We have several agreements we are looking to conclude on the trip and hopefully it will pave the way toward a very warm peace," Kushner, a senior White House adviser, said at a press conference on the tarmac before the flight.

"History is being written before our eyes," said Ben Shabbat.

What was in the US-brokered deal?

The United States has agreed to recognize Morocco's 1975 annexation of  Western Sahara, which is not recognized by the United Nations. Several US allies have criticized Morocco's contested sovereignty in the disputed region.

Morocco closed its liaison office in Tel Aviv in 2000, at the start of the second intifada — the Palestinian uprising against Israel.

Earlier this year, Kushner also oversaw the normalization of ties between Israel and the United Arab Emirates, Bahrain and Sudan . The agreements marked the first recognition of the Jewish state by Arab nations in a quarter of a century.

Sudan to normalize ties with Israel, says US

Sudan is joining the United Arab Emirates and Bahrain in recognizing Israel, according to US President Donald Trump. The deal is aimed at unifying Arab countries while ostracizing common adversary Iran.