Sudan to normalize ties with Israel, says US

Sudan is joining the United Arab Emirates and Bahrain in recognizing Israel, according to US President Donald Trump. The deal is aimed at unifying Arab countries while ostracizing common adversary Iran. 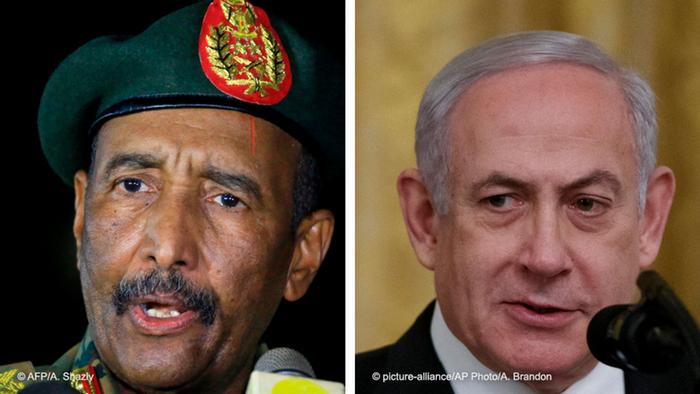 US President Donald Trump announced Friday that Sudan is in the process of normalizing its ties with Israel, making it the third Arab state to do so as part of recent US-brokered deals.

"Sudan and Israel have agreed to the normalization of relations — another major step toward building peace in the Middle East with another nation joining the Abraham Accords," Trump aide Judd Deere wrote on Twitter while referencing similar deals that involve Bahrain and the United Arab Emirates.

The accord between Israel and Sudan follows Trump's provisional agreement this week to take the African nation off the US list of state sponsors of terrorism, on condition that it pays compensation to American victims of terror attacks.

And the latest thawing of relations is just the beginning, according to the US president. "At least five" more Arab nations want closer ties with Israel, Trump told reporters in the White House as he held a three-way telephone conversation with the prime ministers of Israel and Sudan.

In a statement, the German government welcomed the normalization of ties, saying it represents an "important step towards greater stability and more peaceful relations between Israel and its Arab neighbors."

Germany also thanked the US for its mediation role, urging it to "use that momentum now for sustainable peace in the Middle East."

Israeli Prime Minister Benjamin Netanyahu described Friday's development as the start of "a new era" in the region. In a statement, he thanked Trump for brokering the deal, while confirming Israeli and Sudanese delegations would soon meet for talks on commercial and agricultural cooperation.

Netanyahu has made it a priority to improve relations with formerly hostile countries in Africa and the Arab world, particularly in the absence of progress with the Palestinians since he assumed office in 2009.

Palestine: 'A stab in the back'

Those relations appeared to take a turn for the worse with the new Sudanese-Israeli diplomatic ties.

Palestinian President Mahmoud Abbas condemned and rejected the agreement, saying a lasting peace in the region depends on ending the Israeli occupation and creating a Palestinian state.

Sudan's decision is a "new stab in the back and a betrayal of the just Palestinian cause," said senior Palestinian Liberation Organization official Wasel Abu Youssef.

Friday's announcement by Trump is seen by many as another step towards unifying Arab countries against their common adversary, Iran, and comes with the US elections just 10 days away. Trump is seeking to boost an otherwise ailing campaign, as he trails presidential rival Joe Biden in the polls.

The US president has said he is willing to remove Sudan from a terror blacklist once it pays an agreed compensation package to American victims and their relatives.