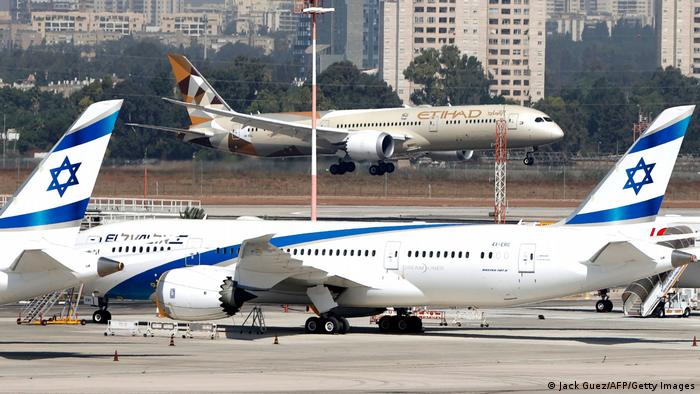 A United Arab Emirates (UAE) delegation arrived in Israel on Tuesday, in what was a historic first visit by a Gulf Arab nation. Top US officials accompanied the group on the trip, which was the next step after Israel signed a normalization deal with the UAE and Bahrain last month.

The UAE and Bahrain became the first Arab states in a quarter of a century to sign deals to establish formal ties with Israel.

"We are making history in a way that will stand for generations," Israeli Prime Minister Benjamin Netanyahu said, as he welcomed Emirati Economy Minister Abdullah bin Touq al-Mari and Minister of State for Financial Affairs Obaid Humaid al-Tayer.

"I think that the visit of such a high-level delegation from the UAE ... will show our peoples, the region and the entire world the benefit of having friendly, peaceful and normal exchanges," Netanyahu said.

The US and signatories to the normalization agreement have said they hope it helps foster regional peace and stability, but Palestinians have expressed their opposition to them.

Wasel Abu Youssef, a member of the Executive Committee of the Palestine Liberation Organization, said Tuesday's UAE visit came amid Israeli settlement expansion and was "shameful."

"The bilateral agreements that were announced today and the delegations that come and go, all of that offers the occupation a strength to escalate its aggression and its crimes against the Palestinian people and increases its intransigence and arrogance," he said in Ramallah, in the Israeli-occupied West Bank.

In Gaza, Hazem Qassem, a spokesman for the Islamist group Hamas, also decried the arrival of the UAE delegation, saying that "such a visit will only encourage the occupation to pursue the gradual annexation of West Bank lands."

Israel and the UAE agreed to visa-free travel, an unprecedented arrangement between Israel and an Arab state.

While Israel has peace deals with neighboring Egypt and Jordan, it still requires citizens of both countries to obtain visas before entry.

Netanyahu hailed the visa-free travel agreement, saying it will "offer a huge boost for business (and) tourism."