The Palestinian president has said the US decision undermined the two-state solution to its conflict with Israel. Abbas also said the Palestinians will not accept a "biased" US as the sole mediator in the peace process. 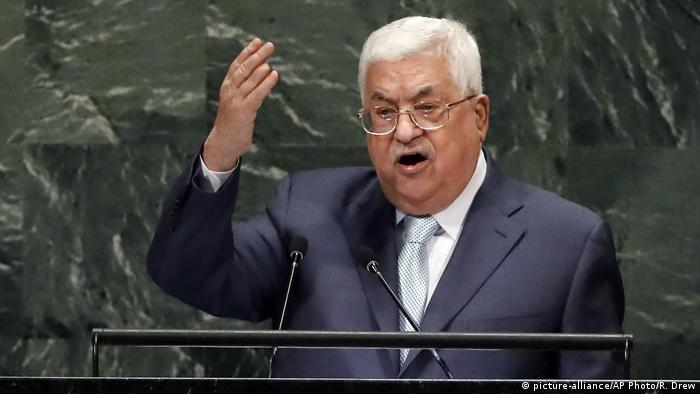 Palestinian President Mahmoud Abbas on Thursday accused the United States of undermining the two-state solution through its decisions to recognize Jerusalem as Israel's capital and withdraw aid funding for the Palestinians.

"With all of these decisions, this administration has reneged on all previous US commitments, and has undermined the two-state solution," Abbas said in his address to the annual gathering of world leaders at the United Nations.

While the US may have cut its funding for the Palestinian territories, other countries have stepped in to narrow the funding gap for this year to $68 million (€101 million). Pledges totalling $118 million from Germany, the EU, Kuwait, Ireland and Norway were made on the sidelines of the UN meeting on Thursday to the United Nations Relief and Works Agency (UNRWA).

"I renew my call to President [Donald] Trump to rescind his decisions and decrees regarding Jerusalem, refugees and settlements," said Abbas, who began his speech by saying "Jerusalem is not for sale and Palestinians' rights are not up for bargaining."

The Palestinian government halted ties with Trump's administration in December following the Jerusalem decision that angered Palestinians who regard the eastern sector of Jerusalem — which Israel annexed in the1967 Middle East war — as the capital of a future Palestine state.

Abbas' attack on Trump came after the US president said he favored a two-state solution to end the Israeli-Palestinian conflict. Trump said he would unveil a new Middle East peace plan within months.

The Palestinian leader said Trump has been "biased" towards Israel since coming to power and added that he could not be regarded as a neutral mediator in the peace process.

"We will also not accept sole American mediation in the peace process," Abbas said.

The last Israeli-Palestinian peace talks collapsed in 2014, but Trump has said he can secure the "ultimate deal" and tasked Jared Kushner, his son-in-law, with brokering an agreement.

"It's really ironic that the American administration still talks about what they talk call the 'deal of the century,' Abbas said. "What is left for this administration to give to the Palestinian people? What is left as a political solution?"

Israeli Prime Minister Benjamin Netanyahu, who spoke shortly after Abbas, said he was not surprised by Trump's initial comments on the two-state solution. He mainly targeted Iran during his speech.

"Instead of responding to the outstretched hand of Israel and the United States, the only thing that interests [him] is to settle scores and drive the region toward confrontation."

The jubilation that greeted the lavish opening ceremony of the controversial US embassy in Jerusalem was in stark contrast to the rising death toll reported from the Gaza Strip. Dana Regev collected eye-witness accounts. (14.05.2018)

US President Biden said efforts to secure a two-state solution must continue despite appearing far off. Palestinian President Abbas said there was a narrowing window to resolve the Israeli-Palestinian conflict.