Is Philippines muzzling free press amid coronavirus lockdown? | Asia| An in-depth look at news from across the continent | DW | 06.05.2020

The Philippine government's move to shut the nation's largest broadcaster is the latest affront to press freedom that has left millions of Filipinos cut off from access to vital information in the middle of a pandemic. 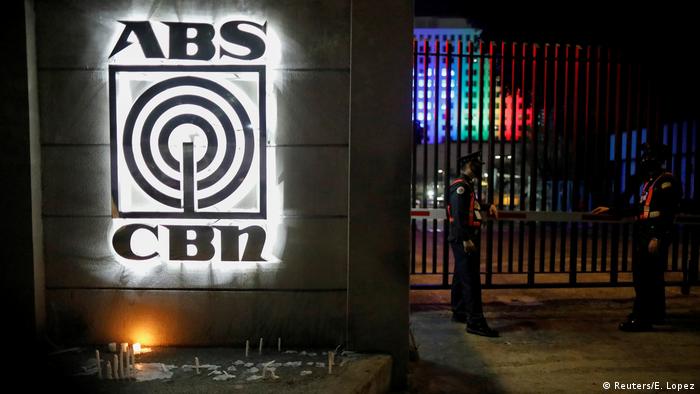 ABS-CBN television and radio operations went off-air on Tuesday after the National Telecommunications Commission (NTC) issued a cease-and-desist order following the expiration of its legislative franchise on May 4.  The station's cable news and digital operations continue to operate.

Vergel Santos, chairperson of the Center for Media Freedom and Responsibility (CMFR), told DW that the ABS-CBN shutdown was tantamount to a news blackout.

"The TV and radio programs of ABS-CBN reach millions of Filipinos in the most remote parts of the country. Where will they get their news now?" said Santos.

The veteran journalist also said the timing of the closure was problematic. "The government is taking advantage of this pandemic, which has all of us confined to our homes. Otherwise, we would be protesting on the streets," Santos added.

Media organizations and citizens widely condemned the government's move to shutter the network. Hours before the station aired its final news broadcast, people gathered outside the ABS-CBN headquarters in the capital of Manila, lighting candles and holding protest signs.

"The decision is unfair to the network and the thousands who depend on the network for their livelihood. It creates an unnecessary distraction for both the government and the private sector from focusing on saving lives and keeping people safe," the Philippine Broadcasters Guild (KBP) said in a statement.

Presidential spokesperson Harry Roque backed the NTC's decision to issue a closure order and said, "ABS-CBN is free to exhaust all legal remedies available to it."

In 2017, Philippine President Rodrigo Duterte accused ABS-CBN of swindling him for not airing his paid political ads during his presidential campaign. Since then, Duterte has consistently been threatening not to renew the network's legislative franchise.

"Your franchise will end next year. If you expect it to be renewed, I'm sorry. I will see to it that you're out," Duterte said last December.

Media outlets, electricity companies and cable TV providers are required by law to secure a legislative franchise to operate. Neng Juliano Tamayo, president of the national organization of cable TV operators, FICTAP, is opposing the renewal of the ABS-CBN's franchise because of the station's alleged anomalous charging for its cable programs.

ABS-CBN's 25-year legislative franchise expired on May 4. The renewal of its broadcast franchise is subject to a congressional review. However, both the Senate and the House of Representatives issued a resolution stating that ABS-CBN should be allowed to operate while their franchise renewal is pending in Congress.

Duterte has a long track record of cracking down on the media, especially those that exposed the brutality of the nation's war on drugs, his administration's centerpiece campaign. The Duterte government has threatened media outlets like the Philippine Daily Inquirer and online news network, Rappler, with closure. 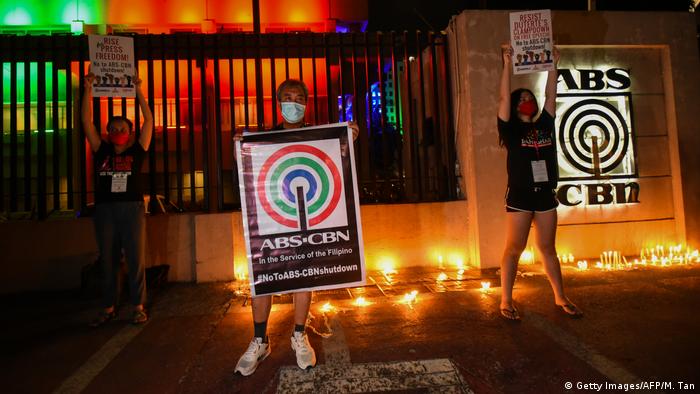 Maria Ressa, chief executive officer of Rappler, has been the target of relentless political harassment and intimidation. Ressa has been arrested twice and has at least seven cases against her pending in court.

When Katherine Bautista's son, John, was killed in the state-sanctioned drug war, she turned to the media for help. "The media was my only platform to let others know the truth about the war on drugs waged by the government," Bautista told DW.

The Philippines was known to have one of the freest presses in Asia following years of media suppression under former dictator Ferdinand Marcos who was ousted in a peaceful people power revolt in 1986.

ABS-CBN was ordered to close in 1972 following Marcos' declaration of martial law. Its closure yesterday heightened fears of media suppression and harassment.

Just as the largest TV network signed off, radio reporter Cornelio Pepino was shot dead in Dumagete City, southern Philippines. "Aside from the media killings, there is a high level of intimidation and harassment against journalists, especially online. We may see less critical reporting as a result of all of this," Nonoy Espina, president of the National Union of Journalists in the Philippines (NUJP), told DW.

Beyond the legal and political uproar, the closure of the network is an emotional loss for millions of viewers like Lina Bacalando, a 58-year-old community worker and grandmother.

When she turned on her TV earlier today and was greeted by a black screen, Bacalando felt "like something in me had died."

Bacalando told DW that her family tuned into ABS-CBN nearly 24 hours a day for news and entertainment. "The network's telenovelas entertain us and help make quarantine bearable."
But Bacalando's sadness quickly turned to anger and fear. "This government is too much. Too oppressive. Too vindictive. They silenced a media giant. What more can they do to us ordinary people?"

Every month, the One Free Press Coalition draws attention to unresolved cases of crimes against journalists. In April, the list includes the cases of Mohammad Mosaed, Maria Ressa and Alaa Abdelfattah. (02.04.2020)

Germany's alleged attempt to fly in Filipino nurses to provide assistance to COVID-19 patients has irked many in the Philippines. The country is facing a shortage of health workers as it tries to combat the disease. (26.03.2020)