Is 3D printing the future for building homes?

3D-printed homes can combine design, functionality, low costs and environmental concerns. Is 3D printing in construction the go-to technology of the future?

Recently, the first fully 3D-printed house was unveiled in the town of Beckum, in northwestern Germany. The two-story residence, offering 160 square meters (1,722 square feet) of living space, is a project that was co-funded by the state of North Rhine-Westphalia.

3D printing could be likened to icing a cake. The printer, held by a robotic arm, prints the material layer by layer, and leaves spaces where doors or windows are supposed to be attached. This printing in layers allows architects a lot of flexibility in design as well as their choice of materials for building a structure.

"The special thing is that we, as planners, have a lot more freedom with the concrete printer," Waldemar Korte, the architect whose company designed the structure, told German public broadcaster WDR. "We can really play around with the form."

Can 3D printers print everything?

Can 3D printers print everything?

Creativity with a conscience

Also made with 3D printers, the Italian architects' sustainable houses TECLA are made of clay. Built in Massa Lombarda, near Bologna in Italy, these habitats were designed by the Italian company WASP (World's Advanced Saving Project) and Mario Cucinella Architects (MCA).

TECLA — an acronym for technology and clay — structures are built entirely from local raw earth, according to WASP.

The project is inspired by author Italo Calvino's 1972 novel, Invisible Cities, which is a series of conversations between Marco Polo and the Mongolian emperor Kublai Khan. TECLA refers to the word "Thekla" that Calvino uses in his novel to describe a city that is always under construction.

These houses, according to the company, are a response to the  climate emergency we are facing today in the form of migration and natural disasters.

The circular structures, which cover an area of 60 square meters, have been created after researching local building practices, bio-climatic principles and the use of natural and local material. It is a nearly zero-waste project and even its furnishings are designed to be recycled or reused.

A TECLA structure can be built in 200 hours, its designers have said.

German architect Waldemar Korte, predicts that — based on the current rapid development of the technology — building 3D houses may become cheaper than traditional methods of construction within the next five years. "We are much faster at building," said the architect, whose house in Beckum only took four days to build. "We need fewer people and that helps when you have a dearth of skilled people in the building industry."

Indeed, innovative concrete mixes and the sinking prices of concrete printers are driving down costs for printing houses all over the world, according to All3DP, a website that specializes in news about 3D printing.

Texas-based building company ICON, which works on developing low-cost housing, aims to reduce the price of a house to $4,000.

The Chinese company Winsun has also broken records by print-constructing 10 houses in one day back in 2014. Each house cost around $4,800 to build.

In an article published early this year, All3DP listed a number of printed constructions that were produced at very low cost and said that large concrete printers and innovative concrete mixes were driving the change.

How do 3D printers work?

How do 3D printers work?

Concrete mixes are, as the name suggests, a mix of cement and sand, but many builders add geopolymers and fibers for reinforcement.

Lavacrete, which was developed by US architect Paul Schwam, is a mix of pulverized red volcanic rock, cement and water. It can withstand extreme weather conditions.

ICON recently built a series of 3D-printed homes in Mexico's Tabasco state, which experienced a 7.4-magnitude earthquake earlier this year. The houses were mostly unaffected.

Many 3D-printed structures today offer an optimal combination of creative design and eco-friendly materials that can be built fast and at a substantially low cost.

Until now, the NGO has helped fund more than 2,300 homes in Mexico, Bolivia, Haiti and El Salvador. "Instead of waiting for profit motivation to bring construction advances to the Global South, we are fast-tracking innovations liked 3D home printing that can be a powerful tool toward ending homelessness," New Story's chief operating officer Alexandria Lafci said in a statement.

In Germany, builders are also waking up to the idea that 3D printing could be an option to ease current bottlenecks in the country's building industry and resolve the housing shortage.

So far, the new technology has not found a foothold in Germany, with only two houses made from 3D printing technology out of the 300,000 apartments built in the country in 2020. 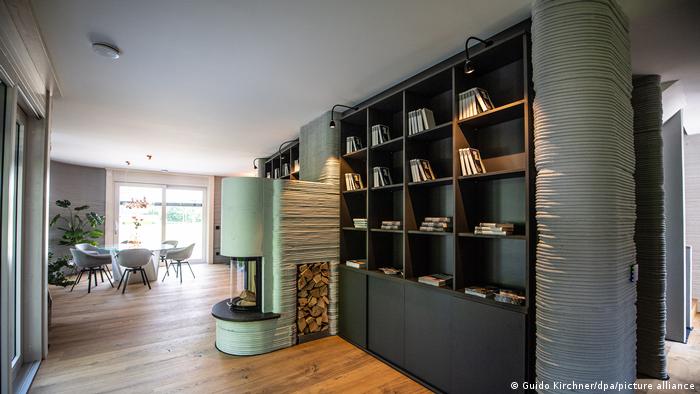 The interior of the newly-constructed house in Germany's Beckum

But companies are hopeful. "We believe that 3D printing would, above all, find a market in prefabrication," said Felix Pakleppa, head of the Zentralverband Deutsches Baugewerbe (Central Association of the German Construction Industry), adding that various parts could be printed in factory halls and then shipped to construction sites.

Meanwhile, companies like ICON have already moved their focus to space, where its architects are collaborating with the Bjarke Ingels Group (BIG) and NASA to create an autonomous construction structures on the moon to further research and "imagine humanity's first home on another world."

3D-printed homes for the future

Architects around the world are experimenting with 3D printing to develop eco-friendly homes in designs that can withstand extreme weather conditions.