Iran and Iraq have both said they want to cooperate more despite fresh US sanctions on Tehran. The gulf neighbors could increase bilateral trade by $8 billion. 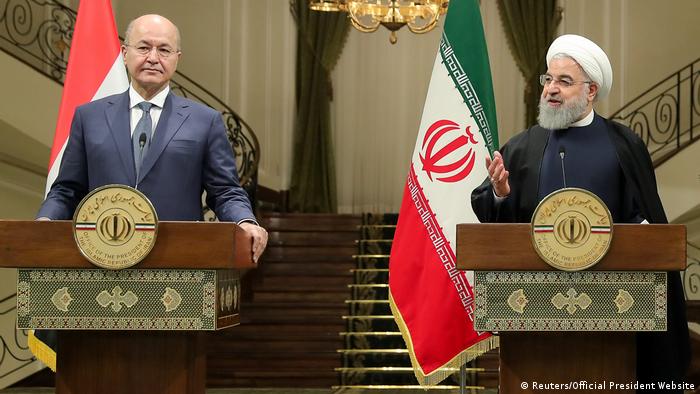 Iran and Iraq could increase their annual bilateral trade to $20 billion (€17.5 billion) from $12 billion, Iranian President Hassan Rouhani said on Saturday. His remarks, made during a visit to Tehran by his Iraqi counterpart, President Barham Salih, came two weeks after fresh US sanctions against Iran went into effect.

"Bilateral cooperation is in the interest of both nations and should be continued without foreign interference," Rouhani said at a joint press conference. Salih also described relations between the two nations as strategic and "rooted in history."

"Our policies are therefore clear: We want strong and friendly relations between the two countries," Salih said.

Rouhani said cooperation in the fields of oil, gas, electricity and the expansion of rail networks would be under discussion.

The main targets of the US sanctions are Iran's oil exports and its financial sector. However, Iraq is plagued by chronic power shortages and is heavily dependent on Iranian gas for its electricity supply, so Washington granted Baghdad a 45-day waiver from the measures, allowing Iraq to import Iranian gas and energy supplies, as well as food items.

Power outages have frequently left Iraqi homes without electricity for up to 20 hours a day — a key factor behind weeks of protests in Iraq during the summer.

Iraq's reliance on Iranian gas is uncomfortable for the United States, whose granting of a temporary waiver from sanctions appears to have come with a condition that Iraq reduce, and eventually stop, the use of Iranian electricity, according to Nussaibah Younes, a senior adviser for the European Institute of Peace.

"In order to get this exemption, the Iraqis had given some sort of roadmap idea," Younes sad.

Iraqi officials have said they need more time to find an alternative source.

Iran has been highly influential in Iraq since the toppling of Saddam Hussein in 2003, and more recently was a key partner in pushing back Islamic State.