Iran's president is on a high-profile visit to Iraq, focused on trade. The visit sends a signal that Iran has regional options against the United States' "maximum pressure" campaign against Tehran. 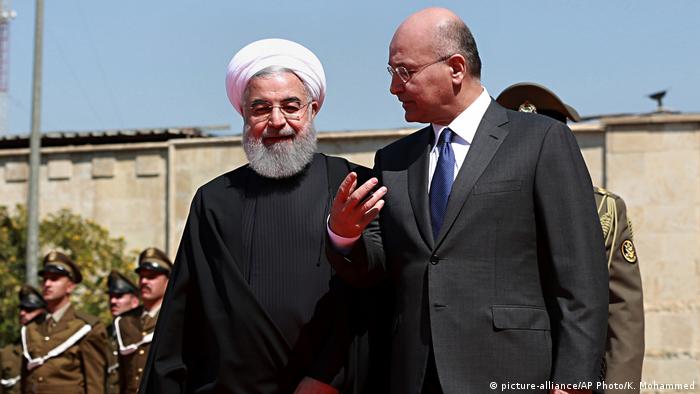 Iranian President Hassan Rouhani arrived in neighboring Iraq on Monday to kick off a three-day visit as the Islamic Republic is under mounting US pressure over its regional influence.

Rouhani's first official visit to Iraq — dubbed by his foreign minister as a "historic" new start in relations — is primarily focused on trade and investment at a time when Tehran is battling against economic isolation following the Trump administration's withdrawal from the 2015 nuclear deal and reimposition of unilateral sanctions.

The visit sends a strong signal to the United States that its policy of "maximum pressure" is not working, as Iran seeks to expand regional economic ties and display its political and military influence in Iraq.

Unlike US President Donald Trump, who paid a brief four-hour visit to US troops at an air base in Iraq over Christmas and did not meet the country's main political actors, Rouhani is leading a large political and trade delegation. 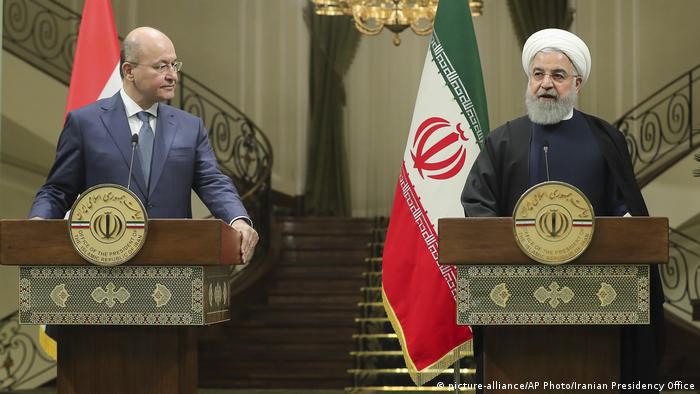 Iraqi President Barham Salih (L) was in Iran in November, one of a number of high-profile exchanges between the two sides in recent months

Iranian media has speculated that Rouhani may also be granted a meeting with Grand Ayatollah Ali Sistani, the reclusive 88-year-old spiritual leader of Iraqi Shiites and one of the most senior clerics in Shiite Islam. Such an audience would boost Rouhani's status among hard-line critics at home and show the United States there are limits to its pressure campaign in Iraq.

After China, Iraq is Iran's second-biggest trading partner, with $12 billion (€10.7 billion) — a number the countries are seeking to increase to $20 billion — in bilateral trade a year. Iraq relies heavily on the import of Iranian natural gas and electricity.

The United States has granted Baghdad temporary sanctions waivers on the import of Iranian natural gas and electricity, out of concern shortages could spark more of the kind of unrest that hit Basra and other cities last summer.

"Iran is well aware of the American pressures to have Baghdad on board in its policy of maximizing pressures on Iran. However, it's also aware that given the level of interdependencies between the two sides, Iraq is not yet ready to fully comply with the US demands even if it decides to do so," said Hamidreza Azizi, an assistant professor of regional studies at Shahid Beheshti University in Tehran.

"Iran wants to build upon the opportunity of sanctions waivers, and by consolidating the existing level of economic ties with Iraq and enhancing the level of interdependency, makes it even harder for the US to convince Iraq to change its course regarding the Islamic Republic," he added.

Iran the most influential power in Iraq

Tehran views the US military presence at its doorstep in Iraq as a threat and a challenge to its influence in Baghdad. That view was strengthened when Trump said earlier this year that it was important to maintain a US military presence in Iraq to "watch Iran," prompting sharp criticism from Iraqi and Iranian officials.

Iran wields influence in Iraq through its economic footprint and extensive ties to Iraqi political groups, Shiite militias and the country's elite.

"Iran is the most influential external power in Iraq," said Emma Sky, who served as political adviser to the US military and is now at Yale University. "The Shiite militias are a critical part of Iranian influence in Iraq. But they also serve to undermine the legitimacy of the Iraqi state particularly through their use of intimidation for political and economic gain."

From Baghdad's perspective, she added, "Iraq seeks to balance its relations between the US and Iran by not angering the former or provoking the latter."

Iran's security policy in Iraq and the region is run by General Qassem Soleimani, the leader of the Islamic Revolutionary Guard Corps' Quds Force. The Rouhani administration plays only an indirect role in security affairs.

However, Azizi points out that security ties between Iran and Iraq could be threatened if not empowered by soft power, including economic ties.

"Security considerations are not directly forming the agenda of Rouhani's visit, but pursuing economic benefits can in fact contribute to the consolidation and deepening of Iran's security influence in Iraq as well," he said.

Human Rights Watch has accused Iraq of violating laws that protect children who are recruited by armed groups. It cited "deeply flawed screening processes" and use of torture to extract confessions of IS membership. (06.03.2019)