Iran's president has rejected the resignation of top diplomat Mohammad Javad Zarif, throwing his support behind the man who negotiated the 2015 nuclear deal with the West. Zarif has been under pressure from hard-liners. 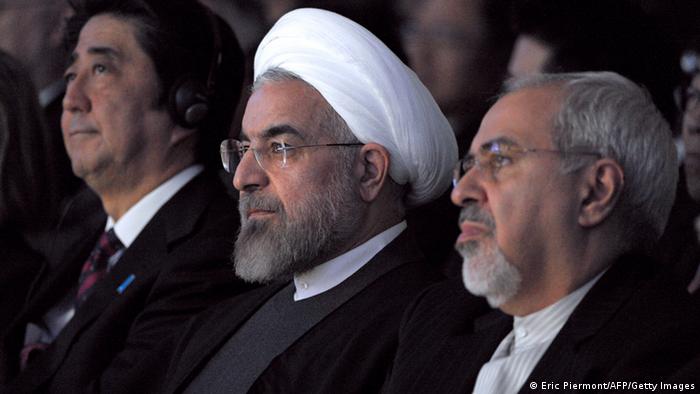 Iranian President Hassan Rouhani has rejected the resignation of Foreign Minister Mohammad Javad Zarif, saying his departure would be "against the country's interests."

On Monday, the US-educated Zarif abruptly announced on social media that he had offered his resignation, signaling growing factional differences between Rouhani's moderate camp and hard-liners.

But by Wednesday, Zarif had received the endorsement of ally Rouhani, the majority of parliamentarians, a top Revolutionary Guard commander and, implicitly, Supreme Leader Ayatollah Ali Khamenei.

"As the supreme leader has described you as a 'trustworthy, brave and religious' person in the forefront of resistance against widespread US pressures, I consider accepting your resignation against national interests and reject it," Rouhani wrote in a letter to Zarif, according to state news agency IRNA.

Zarif, the main architect of the 2015 nuclear deal, has been under pressure from hard-liners who feel vindicated in their distrust of the West following the US withdrawal from the international agreement and a reimposition of unilateral US sanctions.

It remains unclear whether Zarif offered a public resignation or whether it was orchestrated, but analysts have speculated it could have been a calculated move to demonstrate power aimed at critics seeking to undermine the work of the Foreign Ministry.

A tipping point appeared to be Zarif's exclusion from a meeting with Syrian President Bashar Assad on Monday in Tehran, in which the Syrian leader met with Khamenei, Rouhani and other top officials.

"As ordered several times, all bodies — including government or state bodies — must be in full coordination with this ministry with regards to foreign relations," the president said in his letter to Zarif.

A veteran diplomat, Zarif has been a smooth English-speaking voice and Iran's primary interlocutor with the West at a time when Europe is trying to keep the nuclear deal alive despite US sanctions.

In recent months, he has been struggling in parliament against critics opposed to anti-money laundering legislation that is needed for a European Union mechanism to allow continued trade and investment despite unilateral US sanctions.

Iran also needs Zarif to work with India and China to find ways to ease the impact of sanctions.

"Zarif is too valuable for the Iranian system to let him go at a time when his diplomatic skills are needed more than ever," said Ali Vaez, director of the Iran project at the International Crisis Group.

In a further endorsement, General Qassem Soleimani, the head of Iran's elite Quds Force — the overseas arm of the Revolutionary Guard Corps — recognized that Zarif "is indeed in charge of the Islamic Republic of Iran's foreign policy."

The foreign minister is "supported and approved by the system's top authorities, from the supreme leader down," he added.

"There was no deliberate attempt to leave Dr. Zarif out of the Rouhani-Assad meeting," the general stated, blaming a "lack of coordination in the president's office."

Soleimani, the point man on Iran's military operations in Iraq and Syria, also attended the meeting with Assad.

In an apparent attempt to ease tensions, Assad on Wednesday invited Zarif to Syria, where Iran has been one of the main backers of the regime.

On Tuesday, Zarif told Foreign Ministry staff that he hoped his resignation would "act as a spur for the Foreign Ministry to regain its proper statutory role in the conduct of foreign affairs," IRNA news agency reported.

In a social media post on Wednesday, Zarif expressed gratitude for the "generous affections and unsparing support" of officials and the people. Zarif is one of the country's most popular public figures, according to opinion polls.

Reporter Jason Rezaian was about to travel home to the United States when he was detained in Iran in 2014, accused of being a spy. His memoir of his year and a half in prison was published by HarperCollins in January. (25.02.2019)