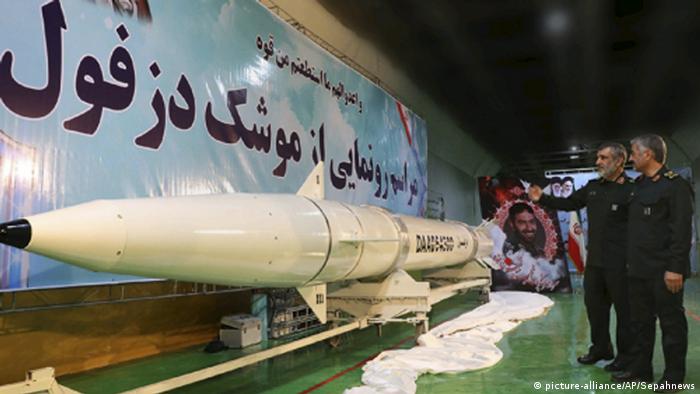 Iran's Revolutionary Guard unveiled on Thursday a new surface-to-surface ballistic missile with a range of 1,000 kilometers (621 miles), according to the elite force's Sepah News.

The move was the latest show of military strength and defiance amid heightened tension, with the US and Europeans demanding that Iran halt missile development and tests.

The new missile, called Dezful, is an upgrade with twice the "destructive power" of the older Zolfaghar model, which had a range of 700 kilometers, Hajizadeh said.

Fars News released a video of the two commanders examining them at an "underground" ballistic missile production facility.

"Displaying this missile production facility deep underground is an answer to Westerners ... who think they can stop us from reaching our goals through sanctions and threats," Jafari was reported as saying.

"Europeans talk of limiting our defensive capability while they have the audacity [to allow] their offensive power be used to attack innocent people all over the world," he added.

On Wednesday, Hajizadeh told a forum in Tehran that Iran's "missile power is not negotiable."

"This deterrence power has been created for the country and we do not hold talks about it with anyone at all," he said.

The comments appeared directed at the European Union, which earlier in the week called on Iran to stop its ballistic missile activity in a statement that also expressed concern over its intervention in regional conflicts.

The European statement came after Iran on Saturday revealed that it had successfully tested a new cruise missile named Hoveizeh with a range of 1,350 kilometers.

European powers remain committed to a 2015 nuclear deal with Iran but are under pressure from Washington to cut economic and political ties following the Trump administration's decision to pull out of the nuclear deal and reimpose sanctions, despite Tehran's compliance. Among the reasons the Trump administration cited in exiting the nuclear accord was Iran's ballistic missile program.

The Iran nuclear deal did not address the country's ballistic missile program.

Iran argues that its ballistic missile capability is defensive and not "designed" to carry nuclear weapons, which it does not have and has been confirmed to not be pursuing.

Iran says it has limited its missiles to a range of up to 2,000 kilometers, which puts Israel, Gulf Arab states and US military bases in the region within reach. In October, the Revolutionary Guard fired the Zolfaghar from western Iran to hit jihadists in Syria.

Germany, France and the UK have set up a payment channel with Iran called INSTEX, to help continue trade and circumvent US sanctions. Washington has cautioned EU nations against such actions. (31.01.2019)

Iran says it is working to improve the precision of its missiles for defense purposes. At the same time, the German-governed plan with France and the UK for payments to Iran despite US sanctions is moving ahead. (29.01.2019)