Anger in Iran and abroad is mounting after Tehran admitted to accidentally shooting down a Ukrainian airliner. Protesters in the country are demanding those responsible be held to account. 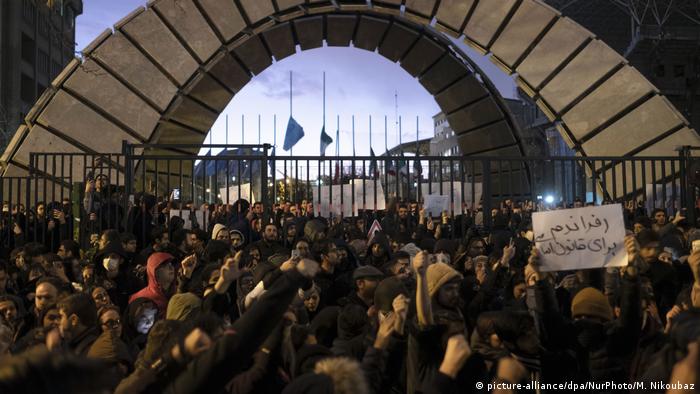 Iran's government is bracing for heightened domestic and international fallout after admitting on Saturday it accidentally shot down a Ukrainian jetliner, killing all 176 people onboard.

The admission by Iran's Revolutionary Guard came days after the January 8 tragedy, raising questions as to why the government had dismissed Western accusations that the doomed airliner had been targeted shortly after takeoff from Tehran's Iman Khomeini International Airport.

It also raises questions why Iran did not shut down the airport and airspace on Wednesday, when it was bracing for the US to retaliate for a ballistic missile attack on an Iraqi base housing American troops.

General Amir Ali Hajizadeh, the head of the Revolutionary Guard's aerospace force, said Saturday that the Ukrainian International Airlines plane was mistaken for a US cruise missile at a time when the country's air defenses were on high alert.

Taking full responsibility for the "human error," he said that he had notified the armed forces on Wednesday immediately after he became aware the Boeing 737 was shot down, but that the military needed time to conduct an investigation.

"The delay in releasing information was not aimed at hiding the issue, but it is the routine drill that the General Staff should study the case first, and all information was collected on Friday morning after studies; and what had happened became clear then," he told reporters, according to state-run Fars news agency, in a bid to dispel speculation that the armed forces deliberately sought to cover up their role.

He added that civil aviation authorities were not to blame for denying the plane had been shot down by air defenses because they were not informed by the military. 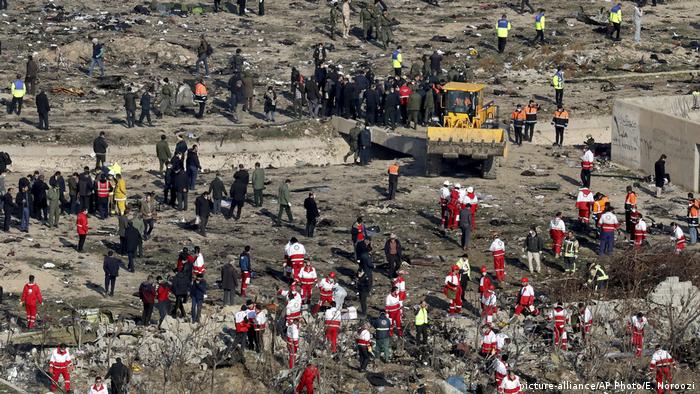 The crash site was cleared and scavengers combed wreckage in the days following the crash, raising concerns that the authorities were destroying evidence

Protests against the government

The accident challenges the Iranian government's narrative that it showed strength in threatening US forces in the region in response to a US drone strike in Baghdad killing Revolutionary Guard commander Qassem Soleimani, only to shoot down a jetliner filled with mostly Iranian citizens and dual nationals.

It also takes the wind out of the public anger at the US and nationalist sentiment the government had sought to capitalize on following Soleimani's death, with hundreds of thousands joining processions to honor the general. In another tragedy, dozens of people were killed in a stampede at his funeral.

Even as the military and government recognized the accident and offered apologies on Saturday, thousands of Iranians demanding that those responsible for the crash be held to account protested in the capital, Tehran, as well as Shiraz, Esfahan, Hamedan and Orumiyeh.

Mehdi Karroubi, a leader of the 2009-10 Green Movement, who is now living under house arrest, called on Khamenei to step down over his handling of the airliner shootdown.

In a statement posted online, the former parliamentary speaker and presidential candidate questioned when Khamenei was informed about the accident, and why there was a delay in notifying the public about the real reasons for the crash.

US warns against crackdown

In his first public statement following Iran's admission, US Secretary of State Mike Pompeo posted a video on Twitter of protesters in Tehran.

"The voice of the Iranian people is clear. They are fed up with the regime's lies, corruption, ineptitude, and brutality of the IRGC [Revolutionary Guard] under Khamenei's kleptocracy. We stand with the Iranian people who deserve a better future," he wrote.

The scale of Saturday's protests was difficult to measure, but they come less than two months after Iranian authorities brutally crushed large anti-government demonstrations, killing hundreds of people.

US President Donald Trump warned against Iranian authorities carrying out "another massacre of peaceful protesters."