Ukraine's President Zelenskiy demanded Iran pay compensation and a full investigation over the downing of the Ukrainian passenger jet, while Germany called for measures to prevent such a disaster in the future. 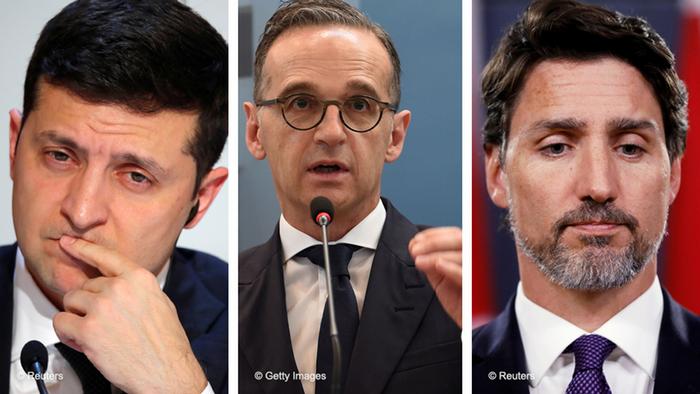 President Volodymyr Zelenskiy on Saturday said Ukraine expected a full investigation and compensation from Iran, after Tehran said it "unintentionally" shot down a Ukrainian passenger jet, killing all 176 people board.

After mounting international pressure, Iran earlier on Saturday voiced regret over firing at the passenger plane in "error" amid heightened US tensions.

Iran had initially denied bringing down the aircraft.

'Bring justice to those responsible'

In a Facebook post, the Ukrainian leader said that the truth about the tragedy had been revealed and insisted on a "full admission of guilt."

"Iran has pleaded guilty to crashing the Ukrainian plane. But we insist on a full admission of guilt," he said.

He then made a series of demands, including compensation and full cooperation with Ukrainian investigators.

"We expect from Iran assurances of their readiness for a full and open investigation, bringing those responsible to justice, the return of the bodies of the dead, the payment of compensation, official apologies through diplomatic channels," he said.

Canadian Prime Minister Justin Trudeau on Saturday also acknowledged Iran's admission, saying his government remained focused on closure and justice for the families of the victims, adding that Canadian investigators will continue to cooperate with Iran.

At least 63 of the victims were Canadian.

"This is a national tragedy, and all Canadians are mourning together," he said.

Swedish Prime Minister Stefan Lofven spoke out to condemn the downing of the plane. 10 Swedish citizens and a further seven people who lived in Sweden died in the crash.

"The fact that a plane was shot down is terrible and horrifying. To have a civil aircraft shot down—whether accidentally or not—is an act that must be condemned and Iran must take full responsibility also in relation to those affected," he said.

German Foreign Minister Heiko Maas called on Iran to prevent such a "catastrophe" from happening in the future.

"It was important that Iran brought clarity to this issue," he told German media on Saturday.

"Now Tehran needs to draw the right consequences in the continued appraisal of this dreadful catastrophe, and take measures to ensure that something like this cannot happen again."

Four of the victims, among them a recognized asylum seeker from Afghanistan and her two children, had been living in Germany, though they did not hold German citizenship.

Read more: US rolls out new Iran sanctions after airstrikes

British Prime Minister Boris Johnson described Iran's admission as an "important first step" and that  "this tragic accident only reinforces the importance of de-escalating tensions in the region. It is vital that all leaders now pursue a diplomatic way forward."

"We will do everything we can to support the families of the four British victims and ensure they get the answers and closure they deserve," he added in a statement.

Ukraine Airlines: 'These were our best guys and girls'

The head of Ukraine International Airlines, the company that operated the doomed jet, said Saturday that he knew from the beginning the crew and plane weren't the cause of the disaster.

"We didn't doubt for a second that our crew and our plane couldn't be the cause for this horrible plane crash," said company chief Yevhenii Dykhne in a statement on social media.

"These were our best guys and girls. The best."

Eleven Ukrainians, nine of them crew members, died in the crash.

Iran fires missiles at US targets in Iraq — as it happened

Iran has launched ballistic missiles targeting the US presence in Iraq, including Ain Assad airbase. With no casualties, US President Trump has said "Iran appears to be standing down." Read events as they happened. (08.01.2020)