US rolls out new Iran sanctions after airstrikes

Washington announced penalties against officials and companies involved in construction and manufacturing. The new sanctions add to already punishing US measures that have hit Iran's economy. 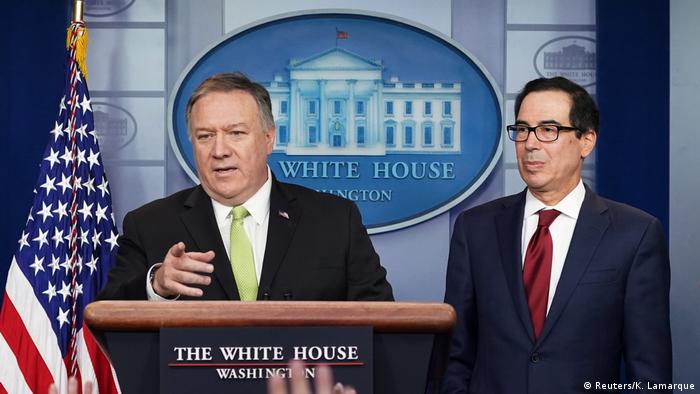 In a joint statement to the press on Friday, US Secretary of State Mike Pompeo and Treasury Secretary Steve Mnuchin announced a new raft of economic sanctions against several senior Iranian officials and major companies.

The financial penalties came as a response to Iranian missile against Iraqi bases housing US troops in retaliation for the assassination of Iran's General Qassem Soleimani.

Soleimani had been the commander of the Quds Force, a special unit of Iran's Revolutionary Guards. He was also known to be in charge of attacks on US targets within Iraq.

"We don't know exactly which day it would've been executed but it was very clear, Qassem Soleimani himself was plotting a broad, large-scale attack against American interests and those attacks were imminent," Pompeo said.

New sanctions will target individuals and firms who own, operate or assist  "sectors of the Iranian economy including construction, manufacturing, textiles and mining," Mnuchin said.

The plan is also to target the "inner heart of Iranian security apparatus" with the sanctions.

While the Iranian missiles did not kill any US personnel, Pompeo said he believed it possible that the crash of a Ukrainian Airlines flight outside of Tehran on Wednesday that killed 176 civilians could have been caused by an Iranian missile launch.

"We do believe it's likely that plane was shot down by an Iranian missile. We are going to let the investigation play out before we make a final determination," he said.

Government officials in the US and Canada have said there is evidence that the crash was caused by a surface-to-air missile, though with the caveat that the passenger jet was not necessarily downed on purpose.

Seemingly under pressure following the accusations from those three countries, the Iranian military on Saturday announced it "unintentionally" shot down the Ukrainian airliner it had mistaken for a "hostile target" when it approached a "sensitive military center."

It said those responsible for the error would be prosecuted.

For several days, Iran had denied a missile downed the airliner.

Crowds of mourners gathered in Kerman, the hometown of Iranian General Qassem Soleimani, for his burial. A stampede reportedly led to at least 50 deaths and hundreds injured. His burial was subsequently postponed. (07.01.2020)