A surprise decision to ration fuel and raise prices by 50% has led to long queues at gas pumps and protests around the country. President Rouhani argues the move is for the good of the people. 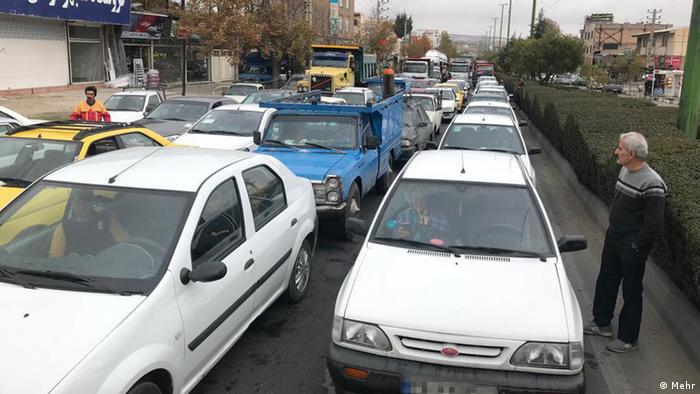 Demonstrations broke out around in dozens Iranian cities and the capital Tehran on the Friday night after the government raised the price of fuel by at least 50%, the country's state news agency reports.

In the city of Sirjan in central Iran, demonstrators tried to set a fuel warehouse on fire in protests that police described as "severe."

The semi-official news agency INSA reported that one civilian was killed and several others injured.

Acting Governor Mohammad Mahmoudabadi said some people had exploited the "calm gathering" and had destroyed public property and damaged fuel stations. He added it was unclear whether the victim had been shot dead by security forces who were "trying to bring back calm to the city."

Protesters also gathered in a dozen other cities. Some crowds attempted to block traffic. State media reported that protests ended by midnight, but demonstrations picked back up again on Saturday.

At Iran's behest, neighboring Iraq closed its southern border to travelers on Saturday due to protests taking place simultaneously in both countries, Reuters reports. The border will stay open for trade but remain closed to travelers until further notice.

The move left drivers waiting hours in lines at gas pumps. Many people said they were shocked when they went to refuel their vehicles. Police were deployed near gas stations to keep order.

Iranian President Hassan Rouhani told advisers that the move was intended to put money in citizens' pockets and that the government has earmarked all funds to be used on subsidies for poor families.

Read more: IMF calls for huge hike in carbon tariffs to save Earth

"No one should imagine that the government has done this because it is economically struggling; not at all, not a rial of this will go to the treasury," Rouhani said, according to state media.

The economy has suffered under US-imposed sanctions in place since 2018. Inflation is at 40% and the economy is expected to contract 9% this year.

Iranian companies get inventive in the face of US sanctions

Fuel in Iran is heavily subsidized, costing 10,000 rials (€0.08, $0.09, approximately) per liter prior to the price hike. Rouhani argues that raising prices is a natural move considering the current conditions. The country's 80 million citizens currently consume about 90 million liters of cheap oil a day.

Read more: Iran and East Germany: Life in a dictatorship explored in 'Tomorrow we are free'

The fuel-rationing measures should bring in 300 trillion rials ($2.55 billion) annually, head of the country's Planning and Budget Organisation Mohammad Bagher Nobakht said on state television, adding that payments will start within the next 10 days.

Iran has stepped further away from its international nuclear pact by restarting uranium enrichment at its Fordo facility, state media have reported. Other parties have called on Iran to stick to the deal. (07.11.2019)

A Swedish-Iraqi national has been charged with gathering information on members of Iran's Ahvazi Arab exile community and sharing it with security forces. Ahvazi have long had a difficult relationship with Tehran. (06.11.2019)

For the first time in over four decades, the authorities in Iran have allowed female fans to attend a men's league match. However, this may have been mainly motivated by a threat issued by FIFA.