Iran and North Korea: The return of John Bolton's 'axis of evil'?

President Trump's new security adviser has built a reputation as a foreign policy hardliner, who has advocated military action against North Korea and Iran. What does his appointment mean for the future of US policy? 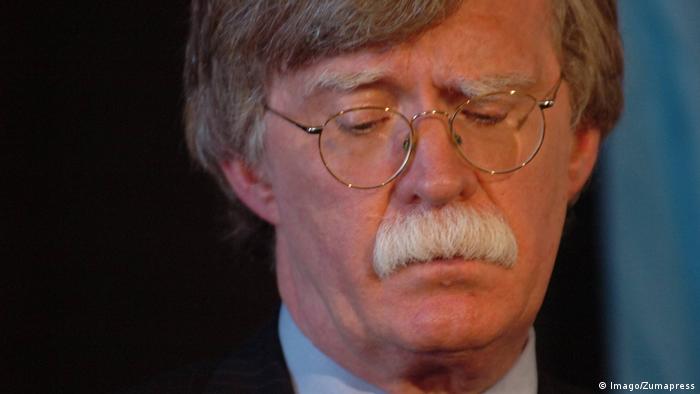 In January 2002, former US President George W. Bush characterized Iran, Iraq and North Korea as "rogue states" in an "axis of evil." At the time, John Bolton was the US undersecretary of state for arms control and international security.

In May 2002, Bolton gave a speech titled "Beyond the axis of evil," during which he placed Syria, Libya and Cuba on the "axis" and promised that the US would "take all necessary measures" to eliminate terrorist threats from these countries. Now, 16 years later, Bolton has the ear of President Donald Trump as his national security adviser.

Attack instead of negotiate?

By appointing Bolton as his national security adviser, Trump has installed an extreme proponent of regime change in Iran, and if necessary, violent regime change.

In 2015, shortly before the signing of the Iranian nuclear deal, Bolton had demanded that Iran be bombed rather than global powers trying to deter Tehran from developing a nuclear bomb.

Bolton has reportedly maintained contacts with the People's Mujahedin of Iran, a political militant organization in exile that advocates the violent overthrow of the Iranian regime.

The group has been accused of launching several terrorist attacks in Iran. During the 1980s war between Iran and Iraq, the People's Mujahedin group fought alongside former Iraqi dictator Saddam Hussein.

In the early 2000s, it was declared to be global terrorist group by the EU and the US, but its name was later removed from their lists. Some people claim the United States' Central Intelligence Agency (CIA) backs the People's Mujahedin to destabilize the Shiite regime in Iran.

So far, the Iranian government has not commented on Bolton's appointment. It is also unclear how Iran's hardliners will react to it.

The appointments of foreign policy "hawks" — Bolton as security adviser and Mike Pompeo as Secretary of State — strongly suggests that President Trump is close to withdrawing from the Iranian nuclear deal sealed by his predecessor Barack Obama. The landmark agreement needs to be renewed around mid-May.

Could Saudi Arabia's nuclear ambitions shake up the Middle East?

Even among North Korean "hawks," John Bolton is considered to be a hardliner. The US president's new security advisor recently said on a Washington-based radio station that the proposed meeting between Trump and North Korean leader Kim Jong Un was "diplomatic shock and awe."

He is also known as an advocate of using a military strike on North Korea. In an editorial published in the Wall Street Journal in February, Bolton said that North Korea's nuclear weapons development posed an "imminent threat" and that the United States had a legal basis to conduct a first strike North Korea.

"Given the gaps in US intelligence about North Korea, we should not wait until the very last minute," wrote Bolton.

Bolton's worldview elicits controversy among North Korea experts, with the assumption that Pyongyang's nuclear weapons development is not based on self-defense, but rather a plan to forcibly unite North and South Korea under the North Korean flag.

In Seoul, the US personnel switch is being met with indignation. Bolton's predecessor, H. R. McMaster, was comparatively moderate, prudent and seen by South Korea as a trustworthy partner. After the switch to Bolton, there are many voices asking if the proposed summit can even take place.

A South Korean official speaking on condition of anonymity said, "Our position is such that if a new path opens up, we will have to take it."

Bolton is known in Seoul for having extensive knowledge about the Korean Peninsula and is seen as a close confidant of President Trump.

In Pyongyang, Bolton has been called a "human scum" and a "bloodsucker" after he criticized the regime in 2003 over its catastrophic human rights record.