Even by US President Trump's standards, replacing H.R. McMaster with hardliner John Bolton is risky, writes DW's Michael Knigge. And it doesn't bode well for key global issues such as the Iran deal. 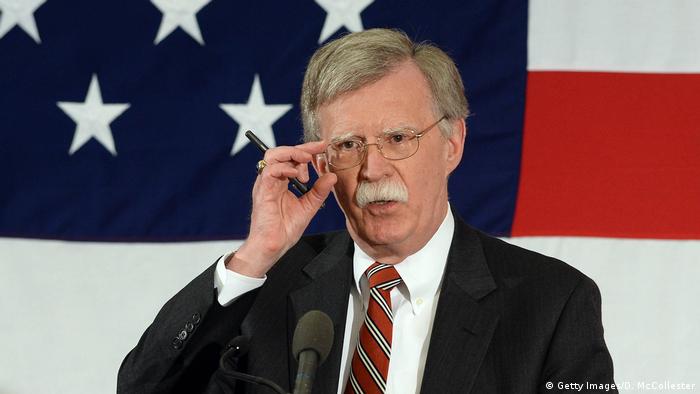 H.R. McMaster, a highly decorated three-star general, lasted more than one year in Donald Trump's revolving door White House. That is a solid record for anyone besides Trump relatives working in the president's inner circle. His predecessor, Michael Flynn, another former military officer, lasted less than one month in Trump's White House orbit and later pleaded guilty to lying to the FBI about his contacts with the Russian government as part of special counsel Robert Mueller's probe.

When there's no chemistry with the president

But as with ousted Secretary of State Rex Tillerson, who bade farewell to the State Department on Wednesday, McMaster's personal relationship to the president — the key factor for survival in the Trump White House — had reportedly been on the rocks for months — if it ever really existed in the first place.

The serious McMaster had reportedly clashed with the unorthodox Trump not only in style but also on signature issues like dealing with Iran and Russia. McMaster argued against nixing the Iran deal and for a hard line on Russia.

The general's remark at the recent Munich Security Conference that Russia had undoubtedly interfered in the US presidential election triggered a public Twitter rebuke from his boss and probably marked the beginning of the end of his tenure. He is bound to be missed by many, including US lawmakers and foreign diplomats who regarded him as a trusted official and conversation partner — even though he clearly is a hawk. Like his successor, John Bolton, McMaster publicly contemplated what he called a "preventive strike" against North Korea. But unlike Bolton, he has not been viewed as reckless or a warmonger.

Those two traits describe Bolton's reputation in a nutshell. And his reputation is well-earned. Bolton was one of the most ardent and publicly outspoken supporters of President George W. Bush's disastrous decision to invade Iraq. Bolton's brief tenure as ambassador to the United Nations, a position he was never confirmed for by the US Senate, was marked by his openly hostile views towards the organization. Judging by a December opinion piece in the Wall Street Journal titled "How to defund the UN," Bolton's positions have not changed.

On Iran, Bolton has expressed similarly bellicose views as he had on Iraq. He has repeatedly called for regime change in Iran. More importantly, in an opinion piece for The New York Times, Bolton three years ago made the case "To stop Iran's bomb, bomb Iran." Just two months ago, he again opined in the Wall Street Journal that Trump should pull the US out of the international Iran agreement, a "diplomatic Waterloo" that "no fix can remedy." For good measure, in the same article, he again advocated for regime change in Iran.

The selection of Bolton as Trump's national security adviser shortly before the president will decide whether to pull the US out the Iran nuclear agreement does not bode well for the future of a deal the Europeans and others desperately want to preserve.

Spring officially began two days ago in Washington, but after the opening salvo being launched in a trade conflict with China and the announcement of Bolton as national security adviser, it still feels like winter in the US capital.