CIA Director Mike Pompeo will become the next US secretary of state, after President Donald Trump fired Rex Tillerson following a series of public policy rifts on North Korea, Russia and Iran. 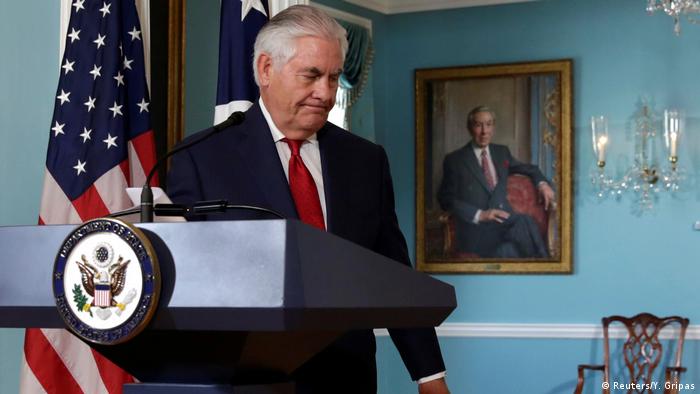 Outgoing US Secretary of State Rex Tillerson said Tuesday that Washington should do more to respond to Russia's "troubling behavior and actions."

In farewell remarks at the State Department, Tillerson said the Russian government "must assess carefully as to how its actions are in the best interests of the Russian people and of the world more broadly.

"Continuing on their current trajectory is likely to lead to greater isolation on their part, a situation which is not in anyone's interest," he said.

"Mike Pompeo, Director of the CIA, will become our new Secretary of State," Trump wrote in a tweet, adding: "Thank you to Rex Tillerson for his service!"

Tillerson gave a brief statement thanking State Department employees and US partners. In order for there to be a seamless transition, he said, he would delegate responsibilities to Deputy Secretary of State John Sullivan until he officially steps down on March 31.

"What is most important is to ensure an orderly and smooth transition during a time that the country continues to face significant policy and national security challenges," Tillerson said.

Tillerson's comments came after Undersecretary of State Steve Goldstein wrote in a tweet that Tillerson "did not speak to the President" on Tuesday morning and was "unaware of the reason" for his firing. Goldstein was fired hours later.

US Ambassador to the UN Nikki Haley wrote on Twitter: "Congratulations to my friend and soon to be Secretary of State Mike Pompeo! Great decision by the President."

Foreign policy experts from Republican and Democratic administrations cast doubt over Pompeo, questioning the timing ahead of talks with North Korea and the choice of a vocal Iran hawk.

In Germany, Norbert Röttgen, the chairman of the Bundestag Foreign Relations Committee, told DW that Tillerson's sacking damages the predictability and credibility of the United States.

"It does not contribute to what is essentially and basically needed and expected from the US administration, and this is predictability," he said. "And this decision on the foreign minister, without firing, without mentioning a reason, is just a symbol for the lack of predictability of the foreign policy of the United States."

Rex Tillerson's troubled year: Tillerson, a 65-year-old former CEO and chairman of energy giant ExxonMobil, was sworn in as secretary of state shortly after Trump's inauguration in mid-January 2017. Rumors circulated in October that Trump and Tillerson had fallen out after Tillerson had reportedly called Trump a "moron." Tillerson never denied making the statement. The president also publically contradicted Tillerson at multiple points during his time in office, including on Iran, climate change, North Korea and moving the US Embassy to Jerusalem.

Who is Mike Pompeo? Pompeo, a 54-year-old former Republican congressman from Kansas, is one of the most hawkish figures among Trump's foreign policy officials. He has called for scrapping the Iran nuclear deal and for regime change in North Korea, and he has downplayed Russian meddling in the 2016 US presidential election.

First woman as CIA boss: Trump also announced that Deputy CIA Director Gina Haspel would replace Pompeo at the head of the CIA. Her appointment would make her the first woman to take over the post. Haspel is a career intelligence operative, who joined the CIA in 1985. She is a controversial figure over her alleged involvement running CIA "black sites" after the September 11, 2001 terror attacks. The New York Times and other US media previously reported that she played a role in the destruction of videos of US torture sessions.

The Senate must approve Pompeo and Haspel before they take up their new positions.

Some senior politicians, including Republican Senator John McCain, have said they would challenge Haspel's nomination.

"The torture of detainees in US custody during the last decade was one of the darkest chapters in American history," said McCain, who himself was tortured as a prisoner of war in North Vietnam. "Ms. Haspel needs to explain the nature and extent of her involvement in the CIA's interrogation program during the confirmation process."

Trump: Tillerson and I 'disagreed on things'

Rex Tillerson's firing comes as the US secretary of state ended an African tour focused on security. His successor will take a similar approach, but with less Africa experience, says the Atlantic Council's Aubrey Hruby. (14.03.2018)

The White House says Rex Tillerson is continuing to lead the State Department, after reports emerged Donald Trump was mulling plans to get rid of him. CIA chief Mike Pompeo is considered his likely replacement. (30.11.2017)

On a unofficial visit to Taiwan, former US top diplomat Mike Pompeo has said Washington should take steps to recognize the self-governing island republic as a sovereign nation. China described his comments as "nonsense."