A group branding itself the "IRA" has claimed credit for a bombing earlier this month in the Northern Irish city of Derry. Brexit and the return of a hard border have sparked concerns the Irish conflict could rekindle. 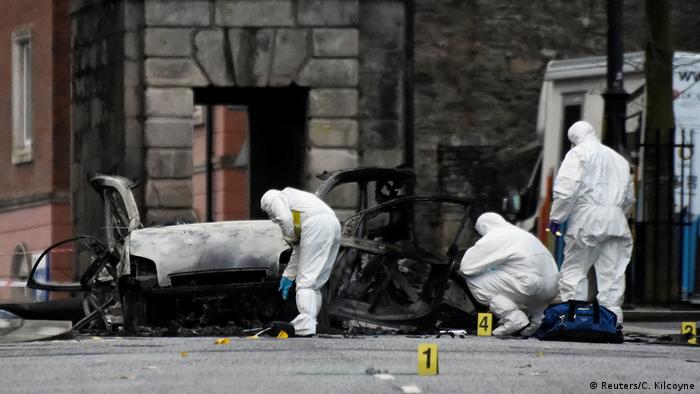 A group calling itself the "IRA" claimed credit for placing the car bomb which detonated in front of a courthouse in Northern Ireland's Derry (Londonderry) earlier this month.

In a statement sent to the Derry Journal on Tuesday, the group said it would "continue to strike at crown forces and personnel and their imperial establishment."

The town of Derry was once a flashpoint in fighting between Irish nationalists, who want to unite Ireland, and Unionists, who want to keep Northern Ireland within the UK. The nationalist fight was spearheaded by the Irish Republican Army (IRA), which ended its armed campaign against Britain in the 1998 Good Friday peace accord. Small splinter paramilitary groups are still active.

Northern Irish police said following the January 19 explosion that the focus of their investigation centered on a militant group known as the New IRA.

"The New IRA, like most dissident republican groups in Northern Ireland, is small, largely unrepresentative, and determined to drag people back to somewhere they don't want to be," a police spokesperson said earlier this month.

No one was injured when the car bomb exploded in front of the local courthouse on an empty street around 8pm local time.

Analysts and European politicians have warned there could be a return of the Irish conflict in the event of a hard border, with customs and other checks, between the two Irelands when Britain exits the European Union.

The statement from the "IRA" said that Brexit was not a factor in their campaign.

"All this talk of Brexit, hard borders, soft borders, has no bearing on our actions and the IRA won't be going anywhere," Derry Journal quoted the group as saying.

The statement continued: "We also caution those who collaborate with the British that they are to desist immediately as no more warnings will be given."

Politicians across Ireland condemned the attack in Derry. The leaders of the nationalist Sinn Fein, which once served as the IRA's political arm, also expressed outrage.

Britain’s border with Ireland was almost completely absent from the debate in the run-up to the country’s 2016 vote to leave the EU. But the 310-mile (499-kilometer) frontier is now at the heart of the Brexit saga. (29.01.2019)

The draft Brexit deal — what you need to know

The EU and UK drafted a Brexit deal that includes a financial settlement and a customs union backstop to prevent a hard border between Ireland and Northern Ireland. DW breaks down the agreement. (23.01.2019)

Police in Northern Ireland arrested two men after a car bomb was detonated in the town of Londonderry. Two other men were arrested on Sunday. Investigators believe the attack was linked with New IRA militants. (20.01.2019)