Northern Irish police posted a picture of what appeared to be a burning car in front of a courthouse. Irish politicians have condemned what they called a terrorist attack. No one was injured by the explosion. 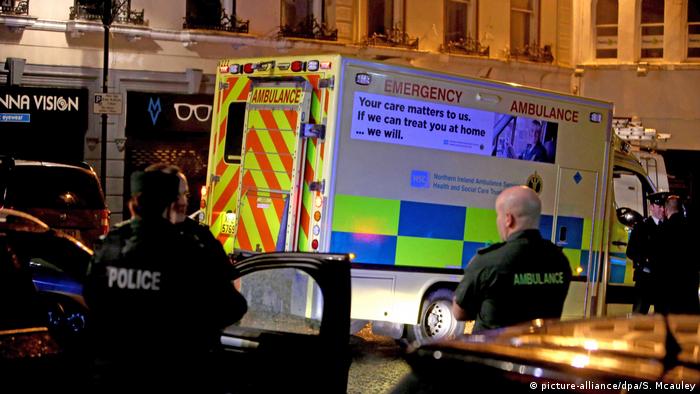 A suspected car bomb exploded in the Northern Irish city of Londonderry late on Saturday, police have said.

"As far as we know no one injured," the police wrote on Facebook.

A photo posted by the police's Twitter account showed what appeared to be a car in flames outside of a courthouse near the city center.

Officers said they were evacuating people from the location of a second suspected car bomb elsewhere in the city.

"This pointless act of terror must be condemned in the strongest terms," said Arlene Foster, the head of Northern Ireland's Democratic Unionist Party (DUP) and former first minister.

Emergency services had helped ensure that there were no fatalities or injuries, she said.

The foreign minister of the Republic of Ireland, Simon Coveney, condemned what he said was a "car bomb terrorist attack."

Read more: Northern Ireland torn between past and future

"There is no place and no justification possible for such acts of terror, which seek to drag Northern Ireland back to violence and conflict," he added.

Police did not say whether they were treating the incident as terror-related.

Reminiscent of the Troubles

Car bombings were common in Northern Ireland from the late 1960s until the late 1990s, a period of violence between Irish nationalists and pro-British unionists known as the Troubles. Clashes have been relatively rare since both sides and the Republic of Ireland and Britain signed a peace accord in 1998.

Some observers fear that Britain's planned exit from the European Union in March could spark fresh tensions between nationalists and unionists if border checks re-emerge between Northern Ireland and the Republic of Ireland.