Police in Northern Ireland arrested two men after a car bomb was detonated in the town of Londonderry. Two other men were arrested on Sunday. Investigators believe the attack was linked with New IRA militants. 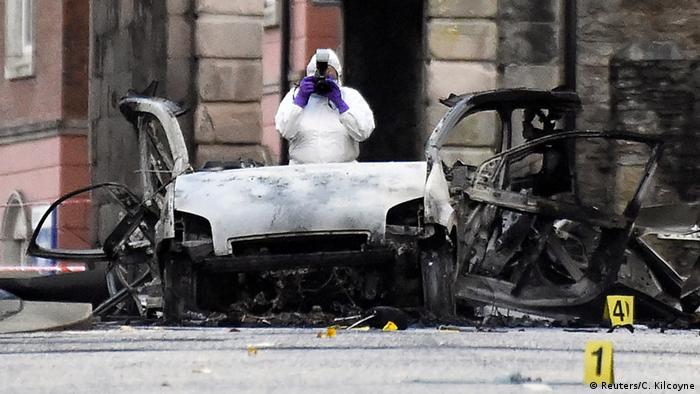 Four men were arrested in Northern Ireland's Londonderry on Sunday in connection with Saturday's apparent car bombing in the town center.

Two of the men, 34 and 42, were arrested late on Sunday, hours after police detained two other men in their twenties.

No injuries have been reported from the the explosion, which destroyed a car parked in front of the local courthouse.

"Fortunately (the bombing) didn't kill anybody but clearly it was a very significant attempt to kill people here in this community," police spokesman Mark Hamilton said.

Police said they were warned about the car bomb while checking another suspicious vehicle elsewhere in the city. The call came via a charity hotline in England.

"At this stage it appears as though the vehicle used had been hijacked from a delivery driver in the Quarry Street area a short time before the explosion," Hamilton said. He described the bomb as "crude" and unstable.

Reminiscent of the Troubles

The town of Londonderry was once a flashpoint in fighting between Irish nationalists, who want to unite Ireland, and unionists, who want to keep Northern Ireland within the UK, known as the Troubles. The nationalist fight was spearheaded by the Irish Republican Army (IRA).

Although the IRA agreed to end its attacks against Britain in the 1998 Good Friday peace accord, splinter paramilitary groups are still active.

On Sunday, police said their "main line of inquiry" was a militant group known as the New IRA.

"The New IRA, like most dissident republican groups in Northern Ireland, is small, largely unrepresentative, and determined to drag people back to somewhere they don't want to be," a police spokesman said.

Politicians across Ireland condemned the apparent attack in Londonderry. The leaders of nationalist Sinn Fein, which once served as the IRA's political arm, also expressed outrage.

Tensions have grown in Northern Ireland over British plans to exit the EU, which could lead to a hard border with the Republic of Ireland.