The new head of Interpol will be elected next week. However, one of the candidates — Major General Ahmed Naser Al-Raisi from the United Arab Emirates — has been accused of torture. 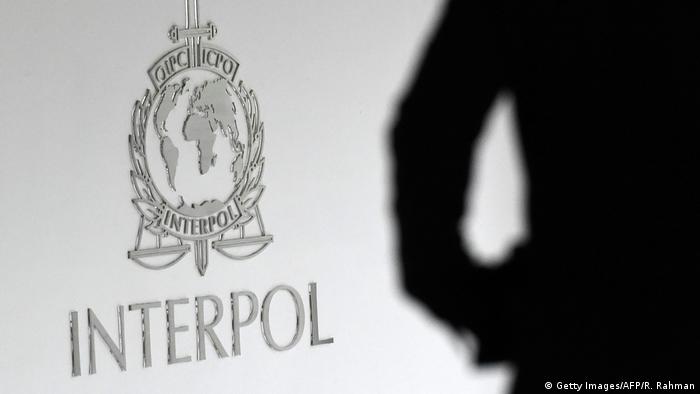 The UAE's candidate for the new president of Interpol is highly disputed and accused of torture.

Politicians, human rights organisations and former foreign detainees are concerned about a candidate from the United Arab Emirates (UAE) who is running for presidency of the International Police Organization (Interpol).

If elected, Major General Ahmed Naser Al-Raisi would succeed Kim Jong-yang of South Korea, who has been in office since 2018. 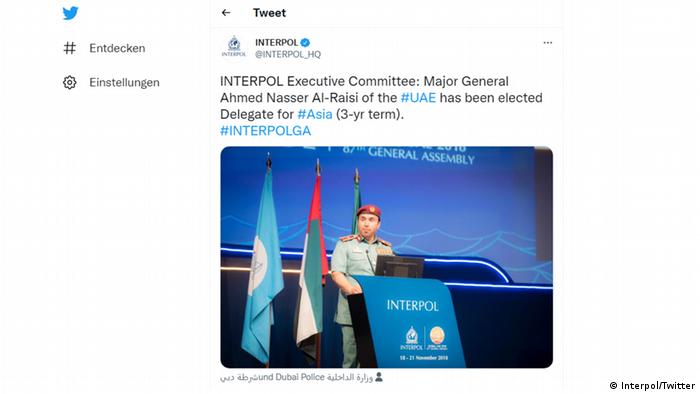 "Given the devastating human rights record of the United Arab Emirates (UAE), the appointment of Mr Al-Raisi as president would be in blatant contradiction to the Universal Declaration of Human Rights and the organization's mission," they said, adding: "If nothing else, it would jeopardize Interpol's international reputation."

The German MPs accuse the major of being "directly involved in human rights violations in a number of high-profile cases."

They also see the major, who was appointed Emirati director general for "central operations" in 2005 and inspector general of the Interior Ministry in 2015, as an active representative of an authoritarian system.

"As a UAE state representative, Mr Al-Raisi is part of a security apparatus that systematically targets peaceful dissenters," the three MPs wrote.

The statement further outlines that civil and political rights are severely restricted in the UAE and that dissidents, journalists and human rights defenders are subject to harsh reprisals, including enforced disappearances, torture, and arbitrary detentions under draconian anti-terror laws.

Those three German politicians are not the only ones voicing their concerns.

In late October, Human Rights Watch — together with 18 other human rights groups — had already expressed concerns about Al-Raisi's candidacy.

The UAE categorically rejects such accusations. "As a current member of Interpol's Executive Committee, Major General Al-Raisi is a distinguished professional with a 40-year track record in community and national policing," the UAE embassy in Germany wrote in a statement to DW.

The statement further says that "as the President of Interpol, he will remain committed to protecting people, making communities safer and providing global law enforcement the latest tools in the fight against sophisticated criminal networks."

It continues by highlighting that the UAE is proud to be one of the safest countries in the world.

"The UAE also is the most progressive force for positive change in the world's most difficult region. As an elected member of the UN Human Rights Council, the UAE prioritizes the protection of human rights at home and abroad, including the promotion of women's empowerment, religious co-existence, and acceptance of people of determination."

However, not only politicians but also formerly detained foreigners in the UAE are worried about the candidate. 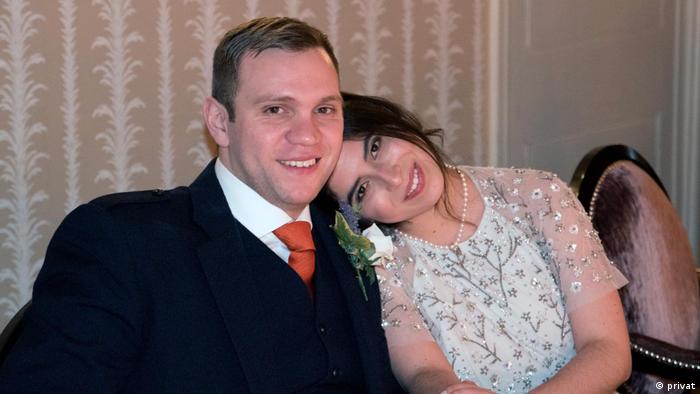 In May 2018, the British political scientist and security expert Matthew Hedges was arrested at Dubai airport after a two-week research stay during which he had conducted several interviews for his doctoral thesis.

The authorities accused him of spying for the UK.

In November that year, he was sentenced to life in prison, however, he was pardoned a few days later.

In May 2021, Hedges brought charges against four representatives of the Emirati authorities —  including Major General Al-Raisi —  who were allegedly linked to his arrest and the conditions of his detention.

He was physically intimidated and threatened, Hedges said in an interview on the phone with DW.

"I was told that nobody knew where I was and that I had no choice," he continued and added that guards had also kept him from sleeping.

He had suffered panic attacks, after which his guards had forced him to drink a narcotic cocktail. Eventually, he even had suicidal thoughts. "All this was not just unacceptable behavior, but systematic abuse of power," Hedges told DW.

The mere idea that Major General Al-Raisi could now be elected president of Interpol is inconceivable to Hedges. "He is responsible for torture. How can such a man become one of the world's leading police officers? It's ridiculous." 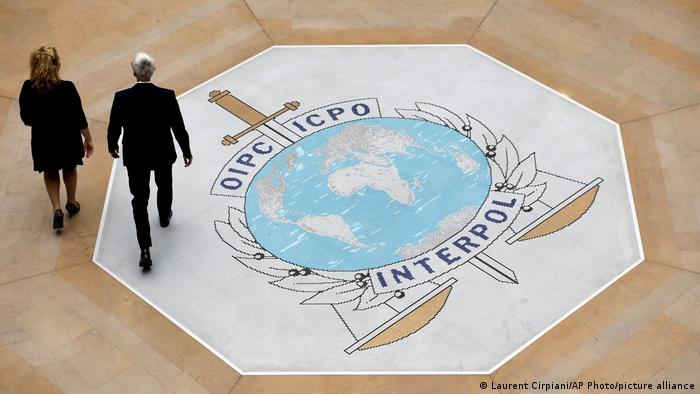 A second British citizen, Ali Issa Ahmad, told DW on the phone about his time in detention in the UAE.

Ahmad had traveled to the UAE in January 2019 for the Asian Football Championship.

During the Qatar vs Iraq match on January 22, he had put on a Qatari team shirt. However, at that time, the Emirate was effectively considered a political enemy of the UAE following a former boycott initiated by Saudi Arabia. Employees of the UAE security authorities took the shirt from Ahmad.

Claiming that he didn't know it was forbidden, Ahmad wore another Qatari team T-shirt the next day on the beach, and was arrested. Ahmad reports in an interview with DW that he was beaten, and at times, a plastic bag was pulled over his head. During his detention, he was also kept from sleeping.

While this cannot be verified independently, it is consistent with similar reports from international human rights groups.

Ahmad has filed a complaint against six representatives of the UAE security authorities — among them Major General Ahmed Naser al-Raisi.

"When I heard that he could possibly become president of Interpol, I was shocked," Ahmad said.

The German Green MP Kai Gehring is convinced that "a repressive state that disregards elementary human rights and the principles of the rule of law in such a way should not be given such influence over the most important international police organization."

He is particularly critical of the possible use of so-called red notices to locate individuals wanted for serious crimes by the UAE security apparatus. These could be misused to have political opponents arrested, Gehring fears.

Among those is Ahmed Mansoor, an activist and blogger who has been imprisoned in the UAE since 2017. Both Amnesty International and Human Rights Watch accuse the UAE of treating Mansoor in violation of human rights standards.

As a result, the Gulf Center for Human Rights has charged Al-Raisi in a French court. It accuses him of being responsible for the torture of Ahmed Mansoor. 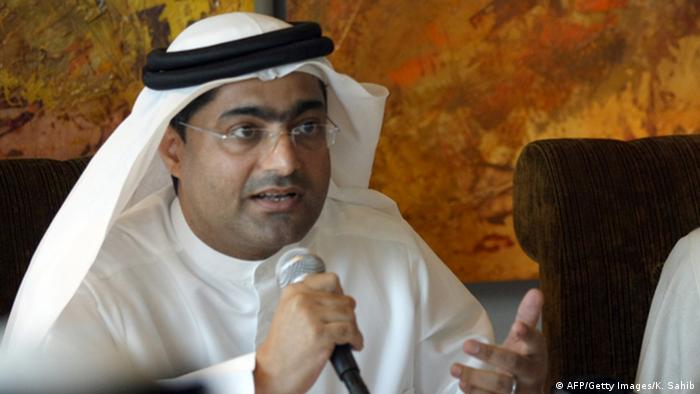 And yet, the UAE's embassy argues that they have been a proud and committed member of Interpol since 1973.

"The country has a distinguished track record working in partnership with fellow members to disrupt criminal networks and bring fugitives to justice," the embassy wrote in a statement addressed to DW.

The statement further highlights that "between 2018 and 2021, 516 lawbreakers wanted by 58 countries were arrested and handed over by the UAE for crimes relating to criminal association, theft, fraud, money laundering, terrorism, and other crimes."

However, human rights issues weren't mentioned in this context at all.

Ahmed Nasser Al-Raisi, who became president of the international police agency last year, is being accused of complicity in the torture of two British men who were detained in the UAE.