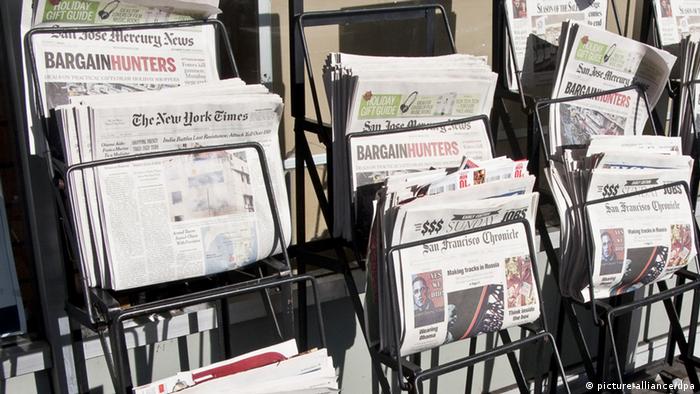 Chancellor Angela Merkel "scored a stunning personal triumph" on Sunday in German national elections, the New York Times writes: "A surprising show of strength for the chancellor and her center-right Christian Democrats." But the US paper warns long drawn-out coalition talks might further paralyze Europe.

The victory is Merkel's, the Washington Post agrees: "Voters cement her status as one of Germany's longest-serving and most influential post-World War II leaders." The paper takes a look ahead at possible coalition partners, and suggests a grand coalition with the Social Democrats could make Germany "more willing to support stimulus packages and be less rigid about austerity when dealing with troubled European partners such as Greece, Spain and Portugal."

France's Figaro celebrates the German chancellor: "Merkel plébescitée: She was voted for by the majority of the people!" The French paper concludes the chancellor has begun to write history. Le Monde agrees there "is no getting round Germany and its chancellor." These past weeks, the paper writes, "every important decision at a European level seemed to depend on the outcome of the election."

As she starts her third term, like Margaret Thatcher before her, Britain's Daily Telegraph writes, "Angela Merkel has the future of Europe in her hands." The Daily Mail also compares Merkel to Margaret Thatcher.

El Mundo notes that while Merkel pulled off a historic landslide victory, "a clear partner is not on the horizon yet." The Spanish paper refers to Angela Merkel as the uncrowned queen of Europe and adds she is distinguished by winning three elections in a row, in addition to being the only head of a large European country who managed to confirm her mandate in the midst of the crisis while "Gordon Brown, Berlusconi, Sarkozy and Zapatero had to relinquish power." El Pais suggests Merkel's showing is "unequalled since the days of Chancellor Adenauer 50 years ago."

Greece's leading daily Ta Nea comments the outcome of the vote is turning Europe into "Merkel-land". It is, the paper continues, a triumph for the "Queen of austerity."

Angela Merkel is unrivaled, Rzeczpospolita from Poland writes, while Gazeta Wyborcza points out the Christian Democratic election victory shows the effectiveness of a campaign that "avoided all conflict with the opponent and convinced Germans that only her government can secure general stability and prosperity."

The Neue Zürcher Zeitung is convinced that with her soft-spoken manner and many small compromises, Merkel makes sure nobody feels threatened by her dominance. "Thanks to her understatement, even setbacks are not as noticeable," the Swiss daily writes.

Austria's Standard writes Merkel's "slalom course" brought the CDU new voters - "the conservatives may be angry, but they have no choice but to grudgingly vote for the chancellor all the same." Her middle-of-the-road course is a "triumph for mediocrity," the paper adds.

La Repubblica regards Angela Merkel's election victory as the nation's "ceremonial ovation for her victory in the European crisis." It is, the Italian paper writes, "a triumph, it is the return to the battlefield where she has already proven her skills and her courage."

Russia's Rossijskaja Gaseta also comments on Germany's national election. "The outcome of the vote is regarded as a sensation. Never before in the history of the Federal Republic has there been such a nervous counting of votes," the paper comments. "The federal election was a high-wire act."

The rest of Europe paid close attention to the vote in Germany. Correspondents from across Europe believe that whoever will govern in Berlin will have a major impact on politics in the entire eurozone. (23.09.2013)

While some in Germany may have been suprised by the election result, there was little attention coming from the US. Germany- and Europe-watchers had expected her to remain in power anyway. (23.09.2013)