Italy's interior minister has said police and prosecutors have cracked a transnational network dedicated to migrant trafficking. The arrests were made in ten cities across the country. 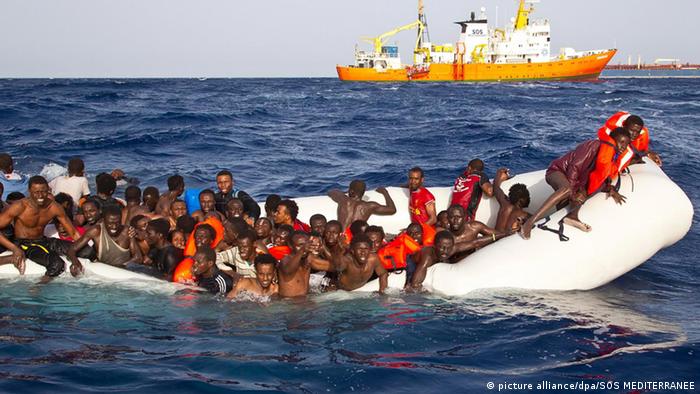 Palermo-based authorities said Monday they had detained 38 people suspected of being part of a human trafficking ring.

Police said they'd built the case based on the testimony of an Eritrean man arrested in 2014.

The man - who police did not name - had "for the first time in Italy, given a complete reconstruction of the criminal activity of one of the most ruthless international migrant-trafficking bands, operating in North Africa and in Italy," a police statement said.

"I decided to cooperate because there have been too many deaths," authorities quoted the 32-year-old man as saying. He reportedly added that thousands of refugees who have drowned attempting to make perilous Mediterranean crossings comprise only a "small fraction" of the overall death toll.

His damning testimony allowed the police to raid a small perfume shop in central Rome on June 13, where they seized 526,000 euros ($585,000) and $25,000 in cash, as well as an address book containing information on other members of the ring, it said.

The arrests were made in ten cities across Italy, Sicilian police said, and the suspects were accused of people smuggling, drug trafficking and various financial crimes. Their nationalities were: 25 Eritreans, 12 Ethiopians and one Italian.

Europe's worst migration crisis since World War II has seen hundreds of thousands of people pay smugglers to risk their lives by crossing to Europe from Libya and Turkey on often unseaworthy boats and dinghies.

Italy has borne much of the brunt, with about 60,000 migrants arriving by boat on its shores this year. Italy's navy and coastguard have rescued tens of thousands of refugees at sea.

This comes as Serbian police say they have arrested eight suspected people-smugglers as part of efforts to curb illegal transfer of migrants toward western Europe along the so-called Balkan route from Turkey via Greece.

Serbian authorities said Monday the group smuggled several dozens of migrants from Serbia over the border to Hungary and then to Austria, earning between 1,100 and 1,200 euros ($1,125 to $1,330) per person.

The smuggling of migrants through the Balkans has been on the rise since nations shut their borders in March, closing down the previous refugee route toward western Europe.

More than 1 million people entered Europe last year and nations have been sealing their borders with fences and walls, as well as reinstating passport controls to curb the influx.

EU foreign ministers have agreed to expand the bloc's anti-people smuggling operation in the Mediterranean Sea. Its ambit will now also include training the Libyan coastguard and enforcing a UN arms embargo. (20.06.2016)