Shattered dreams for refugees stuck in Greece | Europe| News and current affairs from around the continent | DW | 05.06.2016

Refugees who were forced out of Idomeni or left before the camp was cleared, are finding that conditions are barely better in other camps that have been set up, as Marianna Karakoulaki and Dimitris Tosidis discovered. 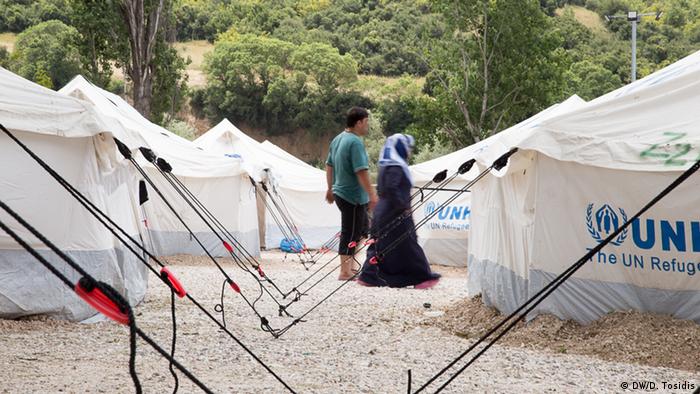 When Idomeni was evacuated, many refugees in Greece saw their hopes and dreams shattered. Idomeni had been a symbol of hope for all those stuck in the country after the sudden closure of the Balkan route. At the same time Idomeni was not a safe place and the conditions at the former transit camp made thousands of people leave voluntarily and make their way to other official camps around Greece. The promise of better conditions and a relocation programme that would work fell short once they started arriving.

One of those camps is Lagkadikia, a former military camp in a village of the same name in northern Greece, only a few kilometers from Thessaloniki, Greece's second-largest city. The refugee camp opened in April and is a relocation site where those who stay there will be able to apply for relocation in Europe or for asylum in Greece.

The camp is under the management of the Ministry of Migration Policy and until recently under the supervision of the UNHCR. Officially, there are currently 845 people on site, but this number is probably higher following Idomeni's evacuation. A play area has been set up for children

"I came here 25 days ago, it is obviously better than Idomeni. It is safer but I would still go back to Idomeni because there is no aid here," said Mohammed, a businessman from Damascus who is in Lagkadikia with his wife and children. "There is no ambulance in this camp and the doctor leaves at 4 p.m., if something happens after 4, no one knows what will happen," he told DW.

Although the delivery of aid is problematic, Mohammed's biggest worry is his children's education. His oldest daughter was studying law at the University of Aleppo before they decided to flee Syria. "When we were in Turkey they started forgetting English, now in Greece they started speaking again," he says.

Apart from the amount of aid delivered to the camp, the location of the tents is a big concern. Most of them have been set up in such a way that they are without any shade. With temperatures reaching more than 35 degrees centigrade in the area, the summer months will be an ordeal for everyone living there. 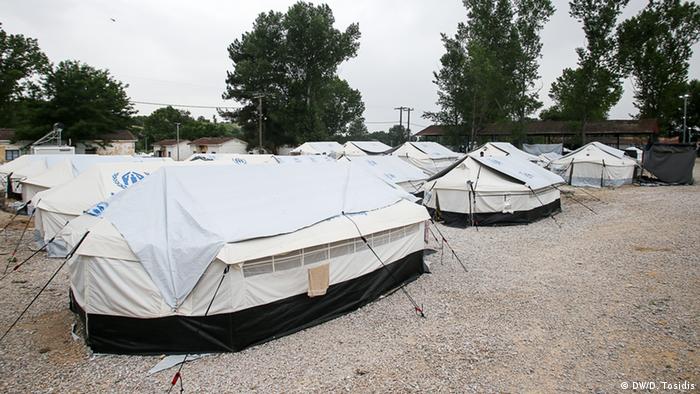 With little shade on offer, the summer heat will only add to the discomforts

As important as the living conditions are, however, the refugees' biggest concern is their asylum status which they hope will be resolved at the relocation center.

"I don't really care where I will go, all I need is peace and safety. Anywhere they take me I will be OK," Mohammed told DW.

Mustafa, a 20-year-old Syrian, agrees."I no longer want to go to Germany, I prefer to stay in Greece, apply for asylum here and maybe go to Istanbul after that," he told DW, while Mohanned, a 25-year-old Syrian from Damascus and Mustafa's roommate, says, "I have no one, I am travelling alone. I don't care if I go to Germany or anywhere else."

It's striking that several of the refugees DW spoke to agree that Germany is no longer their first choice. What's important for everyone is that they reach a country that has all the basic provisions. "I may go to Germany or somewhere else, I don't know because of the relocation programme. I do not need money but I do need some sort of support in order to be able to complete my studies. I am an electrical engineer and I want to finish my masters and maybe a doctorate," says Khatab, a 29-year-old Syrian from Deir ez-Zor.

As the day passes, everyone is focused on their mobile phones. It's Wednesday which means it's time to try and get a Skype appointment - the only service available at the moment for applying for relocation. "I have been trying non-stop since the moment I came here but nothing," says Khatab.

Mohammed is angry and frustrated when he speaks about the UNHCR and the Greek officials that have visited Lagkadikia. "Before we decided to come here, they had told us that they would have a functional asylum service here but there is nothing until now," he told DW.

Anyone who visits the camp soon realizes that the refugees living there are well aware that they have a long wait ahead of them before they can leave Greece. Rolda for example, who's travelling with her three children, has set up a garden with flowers and herbs, and Mohammed has taken under his wings another Syrian family, a mother with three children who were hoping to reunite with their father.

"I have asked the UN to bring them next to my family's tent. They are alone and they need to be protected. The mother is very shy, she never asks for anything even when her baby is hungry because there is not enough food for babies," he says, while putting her baby to sleep. 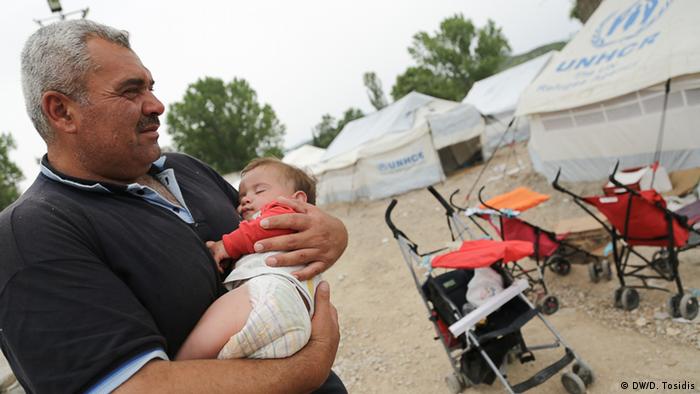 Construction at Lagkadikia is continuing which is a good sign for the future - at the same time it highlights how unprepared Greek authorities are in terms of providing fully-equipped and fully functional camps for those stuck in the country. As the summer heat approaches, that work will have to be completed quickly.