Italian coastguard and navy rescue 3,300 migrants off coast of Libya

A series of operations have been carried out off the coast of Libya to rescue migrants from inflatable boats. The 3,324 people are being taken to southern Italian ports. 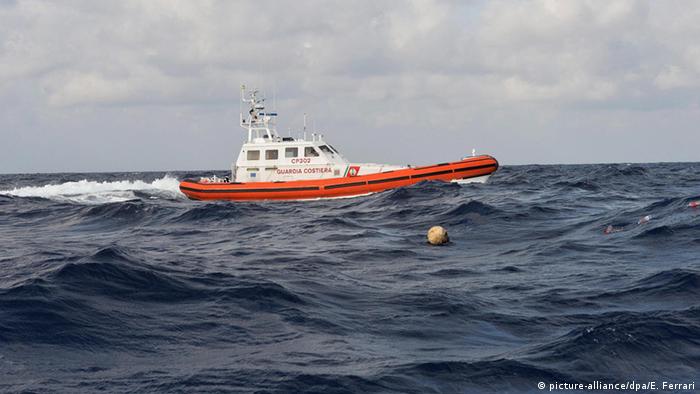 Italian coastguard and navy boats took part in 26 operations off the coast of Libya on Sunday to rescue a total of 3,324 migrants. Including Sunday's operations, over 10,000 people have been rescued in the area since last Thursday.

The rescues were all carried out within 55 kilometers (35 miles) of the Libyan coast where the migrants were found on rubber dinghies and one wooden boat. The migrants are believed to have come from West African countries, including Liberia, Ghana and Guinea. It is not yet known if they will be able to stay in Europe.

A navy spokesperson said one adult was found dead while another four injured migrants were transported by helicopter to the nearest hospital on the island of Lampedusa.

All the migrants were being transferred to southern Italian ports. Including Sunday's rescues, over 66,000 mostly African migrants have arrived in Italy since the start of 2016, according to figures compiled by the UN refugee agency.

The rate at which people are arriving is in line with the pattern from last year. Officials said the high figures of last week were due to calm sea conditions, which make it less of a risk to send the overcrowded boats out to sea from Libya's ports.

More than 3,700 migrants died in the Mediterranean last year, according to the International Organization for Migration.

The German cabinet has approved a plan to extend Germany's participation in an EU operation against people smugglers. The new campaign is aimed at stemming the flood of illegal weapons into Libya. (23.06.2016)

EU foreign ministers have agreed to expand the bloc's anti-people smuggling operation in the Mediterranean Sea. Its ambit will now also include training the Libyan coastguard and enforcing a UN arms embargo. (20.06.2016)