EU foreign ministers have agreed to expand the bloc's anti-people smuggling operation in the Mediterranean Sea. Its ambit will now also include training the Libyan coastguard and enforcing a UN arms embargo. 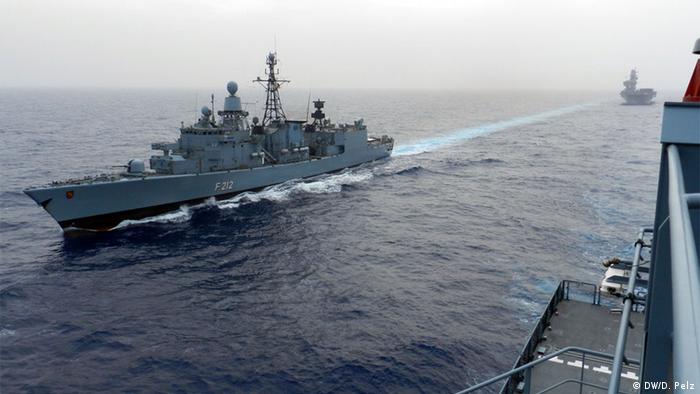 Foreign ministers meeting in Luxembourg on Monday said the mandate of the European Union's naval mission targeting suspected migrant traffickers would be extended by one year to July 2017.

The EU launched the mission, known as Operation Sophia, last year after hundreds of people perished in waters south of Italy while trying to reach Europe. Conflict-ridden Libya has been gripped by turmoil since the fall of longtime dictator Moammar Gadhafi in 2011, and EU leaders say ending the chaos there is crucial to tackling the current migrant crisis. 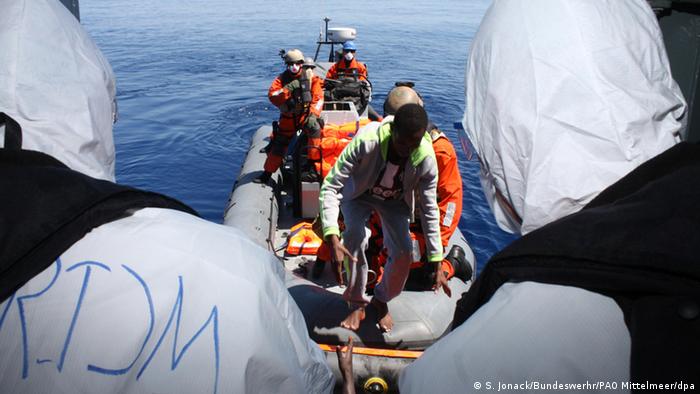 Operation Sophia has rescued 16,000 migrants in the Mediterranean

"We have to now act concretely, both against all those who exploit migrants ... and in the fight against the arms smuggling,” French Foreign Minister Jean-Marc Ayrault said.

Operation Sophia currently consists of five ships and three helicopters charged with intercepting smugglers' boats and destroying them in international waters. As part of its new tasks, the operation will be training the Libyan coastguard and navy, and helping to implement the UN arms embargo off the coast of Libya, a statement from the foreign ministers said.

The EU says nearly 16,000 migrants have been saved from drowning in the Mediterranean Sea by Operation Sophia, while 71 suspected smugglers have been arrested and 139 of their vessels neutralized. Operation Sophia commander Rear Admiral Enrico Credendino said the first phase would begin with 14-week training programs for up to 100 senior Libyan coastguard officials on board a vessel in international waters. A later phase will involve Libyan officials getting on-the-job training on their own boats.

The announcement of Sophia's expansion comes one week after the UN Security Council approved a resolution allowing the mission to enforce Libya's arms embargo by inspecting and seizing suspicious vessels.

The "Islamic State" (IS) extremist group, as well as weapons and people smuggling gangs, have sought to exploit the post-Gadhafi political vacuum. According to the UN, Libya is awash with arms, with more than 20 million pieces of weaponry in a country of 6 million people.

The UN Security Council has unanimously adopted a resolution allowing the EU's maritime force off Libya's coast to seize illegal weapons. The goal is to stop fueling violence and instability in the North African nation. (14.06.2016)

The EU has asked the UN Security Council for a mandate to crack down on illegal arms shipments off Libyan shores. The European bloc already has a naval mission in place to fight human trafficking. (06.06.2016)