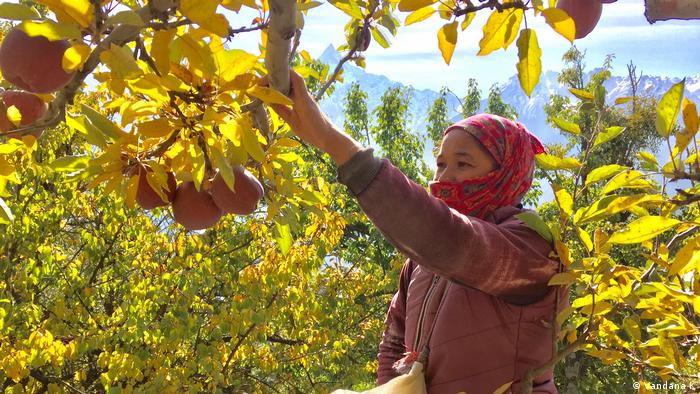 Towards the end of the year, the small town of Kalpa in the Indian Himalayas is a sight to behold. Nestled between the snow-covered Kinnaur Kailash range and the teal waters of the Sutlej river, apple orchards exude the golden glow of fall.

Kalpa lies in the Kinnaur region in the northern state of Himachal Pradesh in India. The region has a reputation for producing the tastiest and most expensive apples on the Indian market.

In India the fruit is unaffordable for some. At an organic farmers' market in New Delhi, Kinnauri apples cost €4 - 5 (US $4.4 - 5.5) per kilo, compared to around €1.50 (US $1.6) for a dozen bananas. Growers are considered prosperous compared to the average Indian farmer.

Yet as warmer temperatures  and decreased snowfall begin to impact apple yields, this prosperity could be in question. 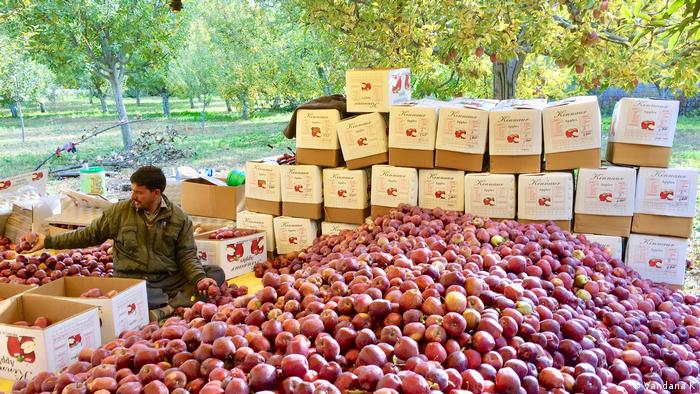 A worker in an orchard in Kalpa, India, grades apples

Apple crops grown in the Himalayas usually require a certain number of "chill" hours, when temperatures are between 0-7 degrees Celsius (32-44.6 Fahrenheit). As temperatures rise, these chill hours are reducing in some areas.

"We have seen that the frequency and quantity of snowfall decreasing and its timing has also changed," says Satish Kumar Bhardwaj, a professor teaching environmental sciences at Yashwant Singh Parmar University in Solan, India. "In such conditions, traditional varieties [of apples] are finding it difficult to get adequate amounts of chilling hours needed for the blooming and setting of the fruit."

Research from Bhardwaj's university shows that warming conditions have pushed some orchards to higher altitudes in Himachal Pradesh.

While some farmers in the lower hills have moved away from apples and started growing vegetables, flowers and fruits such as kiwi and pomegranate, apples are thriving in Tabo, a village located 3,280 meters (10,761 feet) above sea level in the cold desert Spiti valley.

Read more: What can farmers do to protect the climate?

Kishore Kumar, an apple grower from Kalpa had a good harvest this year — 3,000 boxes each containing 26 kilograms (57 pounds) of apples. But not everyone has been so lucky.

Apple grower and social activist Jiya Lal supervises as migrant workers from Nepal scale the trees in his orchard, picking the fruit and collecting it in bags hanging around their necks. Of his 400 trees spread over some two and a half hectares, around 80 have contracted apple scab disease, which destroys the fruit with lesions. 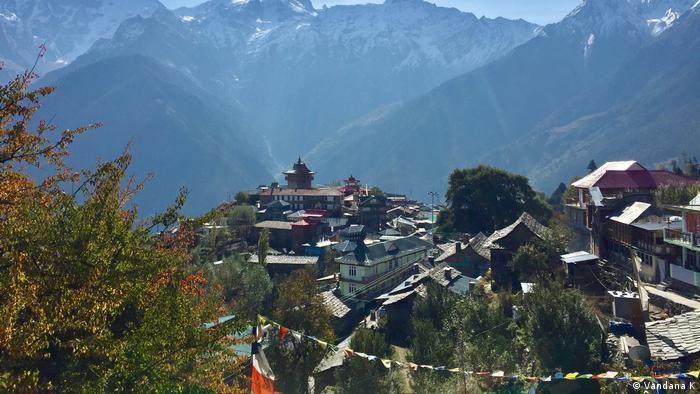 Kalpa in the northern state of Himachal Pradesh has a reputation for producing tasty, and expensive, apples 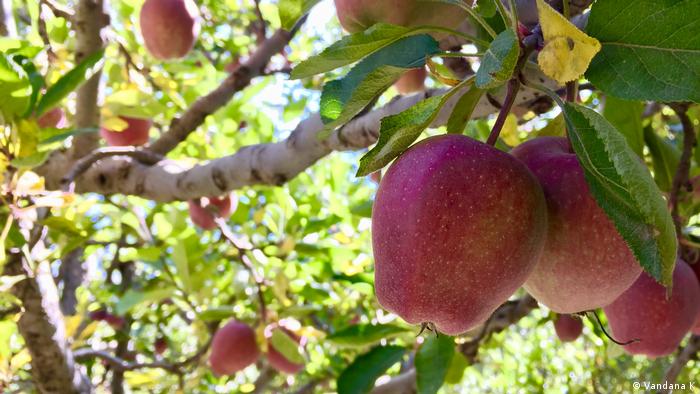 "Apple scab has returned to this area after a few decades," he says. "In May-June, when it is supposed to be dry, there was a lot of rain which caused prolonged dampness and the disease to spread . I will not get even 50% of the market value for the infected apples."  Lal estimates a total loss of approximately €1,267 (US $1,402) from his harvest, an amount that will significantly affect his family's annual budget.

"My orchard's yields and revenues are going down with each passing year," says Sanjay Chauhan, an apple grower and ex-mayor of Shimla, the capital of the state. In his orchard in the village of Kotkhai, Chauhan grows traditional varieties of apple such as Red and Golden Delicious, which were introduced to the region over 100 years ago.

"A laborer harvesting apples in my orchard was covered in white fluffy woolly aphids — that is the amount of pests we had this year despite spraying pesticides frequently," he says. "I feel that in the next five years, we will see a crisis in the apple economy."

Kumar, Chauhan and Lal are among the thousands of families and businesses in Himachal Pradesh who have created a booming apple industry.

This year, Pritamrekha Negi, 42, an apple grower from Ribba village in Kinnaur, lost half her annual income. In August, the leaves on her trees began to yellow and fall far earlier than normal, due to an unseasonal change in temperature. She harvested a mere 350 boxes of apples (8,400 kg) as compared to 800 (19,200 kg) last year. 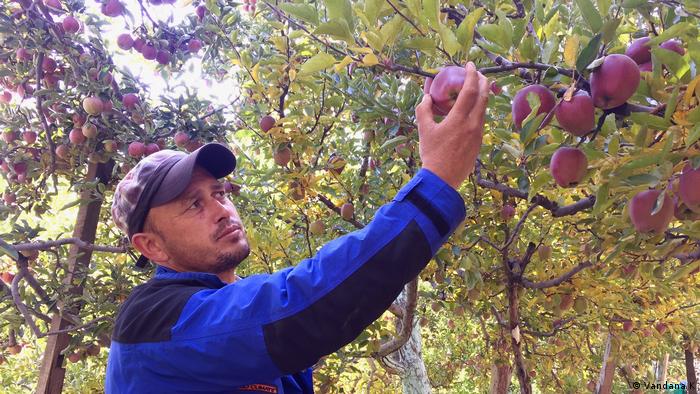 "Our son studies at a boarding school in Delhi and we will have to dip into our savings to pay his school fees for the year," she says. "Our land is covered in apple trees. I have never thought about growing another crop."

Despite the threats, apple growers may have a chance to maintain their yields through new varieties that perform well in warmer temperatures and need fewer chilling hours.

"There is a growing demand for 'low-chill' varieties of apple,” says Vikram Singh Rawat, founder of Kalashan Nursery and Farm in the Himalayan village of Karsog.

Rawat's nursery sells low-chill, high-density apple varieties and apple clonal rootstocks — small plants onto which others can be grafted — imported from the USA, Italy and the Netherlands.

Read more:The seed libraries sprouting up across the US

"Low chill varieties can mitigate the losses caused by climate change," he says. Most of Rawat's customers are young people who have quit their city jobs to revive their family orchards with this modern method. His bestselling varieties are Evasmi Scarlet Spur, Red Kan and Super Chief, all either cross-bred or mutations, but not GMO.

Yet not everyone is convinced. While low-chill varieties appear to grow faster and bear more fruit, their trees are smaller, their lifespan is shorter and they cannot survive on rain alone, instead requiring drip irrigation. This makes growers like Chauhan skeptical.

"There needs to be more research on the sustainability of low-chill varieties. In the summer, we did not have drinking water for 16 days in my village. In such conditions, how would I water new varieties of apple trees?" he asks.

In northern India, falling snow levels and glacial retreat is impacting livelihoods and access to water. DW visited some of these local villages to explore what that means for the lives of people in the region. (15.11.2019)

How can India protect its food security under extreme weather conditions? 02.06.2022