Prolonged droughts and crop failures are causing some Indian villages to empty. For the women and elderly left behind, it's a struggle. As temperatures continue to rise, there's little hope their loved ones will return. 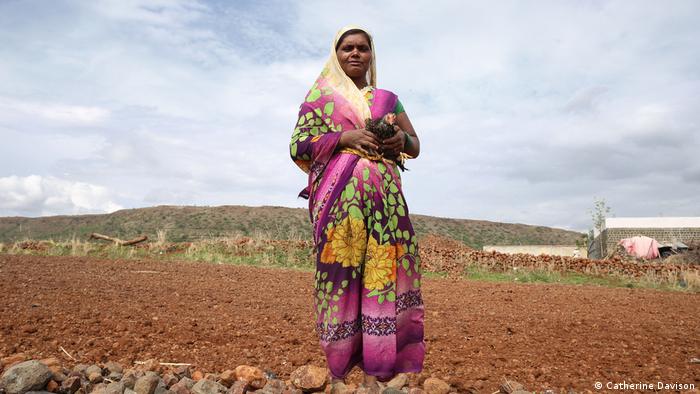 Meera Sadagar has not seen her husband for three months. Ten years ago, he packed his belongings and moved over 200 kilometers (124 miles) away to work in a factory, and now rarely comes home.

If the 35-year-old mother of five is perturbed by this fact, she doesn't show it. Absent husbands are, after all, a recurring theme in Hatkarwadi, a small village nestled into the rocky hillside in Maharashtra state, India.

"In every household it's the same," Meera explained, balancing a child on one hip and an empty water container on the other. "Old men and women, and their daughters-in-law – they're the only people who live here. Everyone else leaves to find work outside." 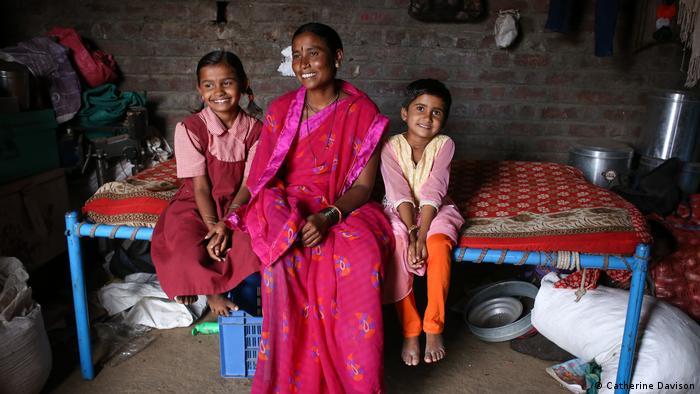 Meera Sadagar, 35, with two of her children at their home in Hatkarwadi village

Official figures are hard to come by, but older villagers estimate a few decades ago Hatkarwadi had a population of over 1,200 people. That number has dwindled to around 250. Recent successive droughts and an ongoing water crisis in the region have caused crop failures and widespread poverty, forcing people to migrate.

"In the old days, there was good rain; it would sometimes rain two or three times in a day," recalled 80-year-old Ganpat Bandgar, who has lived alone in the village since his wife died. "Now it doesn't rain at all."

In summer, the village all but empties. Nearly everyone bolts their homes to head for the cities, sometimes hundreds of kilometers away, in search of seasonal work in construction or sugarcane factories.

Bandgar often feels lonely and is saddened that the village is emptying but would never consider moving away himself. "I've lived here for 80 years; everything I know is here," he said.

His two sons both work in a factory in a city several hundred kilometers away. 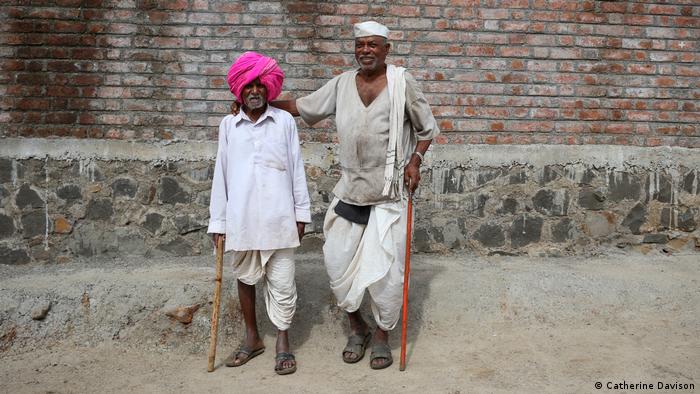 When the water stops flowing

In villages across Maharashtra the story is the same. Drought and crop failure hit 72 percent of districts in the state this year. According to the India Meteorological Department (IMD), Beed district, in which Hatkarwadi village is situated, has seen a pattern of declining rainfall over the last decade.

Currently most of the migration away from the region is seasonal, with migrants finding work elsewhere for six to nine months of the year and returning in the monsoon for planting season.

In the most severely drought-hit areas though, villages are gradually emptying even in the monsoon. In Hatkarwadi, around 80% of the villagers have found permanent work elsewhere, only returning for brief holidays to visit family members left behind. 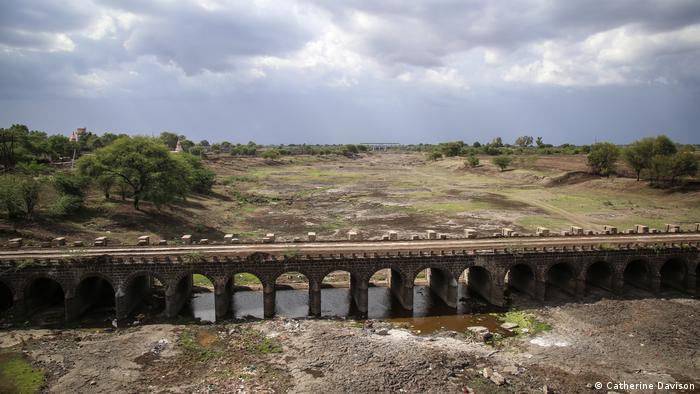 All of the 20 or so wells in the village are empty, and the only source of drinking water is a borewell drilled over 400 feet (122 meters) underground. The electricity needed to pump the water is more than the village is supplied with each day, so the women have a matter of minutes to collect enough before the supply is cut and the water stops flowing.

To make matters worse, water tankers cannot traverse the narrow windy roads leading up to the village, so when the water does run out villagers are left without a backup.

"The problem has become very serious. Even ten years ago there was little rainfall, but in the last two or three years there's been hardly any," said Melvin Pangya, the Maharashtra State Officer for Caritas, an NGO working to mitigate drought-related migration through local water storage solutions.

"In some villages you will find only old people, because whole families have migrated… If there is no rain and no water, then what can they do? They can migrate, they can search for work somewhere else. Those are the options." 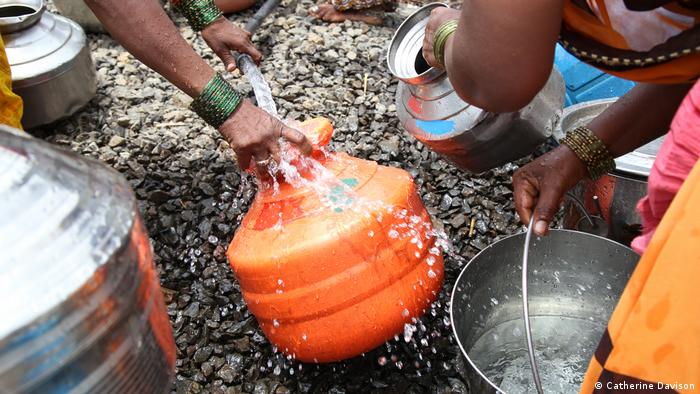 Poor water management and policies favoring cash crops have been blamed for exacerbating existing droughts. The sugarcane factories that employ many of the migrants have been accused of guzzling what little rainfall and groundwater there is. Sugarcane requires 2000 millimeters of rainfall to complete its growth cycle — around five times more than typical food crops.

But the villagers of Hatkarwadi are adamant their problems lie solely with decreasing rainfall and not with poor state policies. The fields surrounding the village contain only millet, they say, a staple food crop. "We cannot afford to risk planting cash crops," explained one resident. 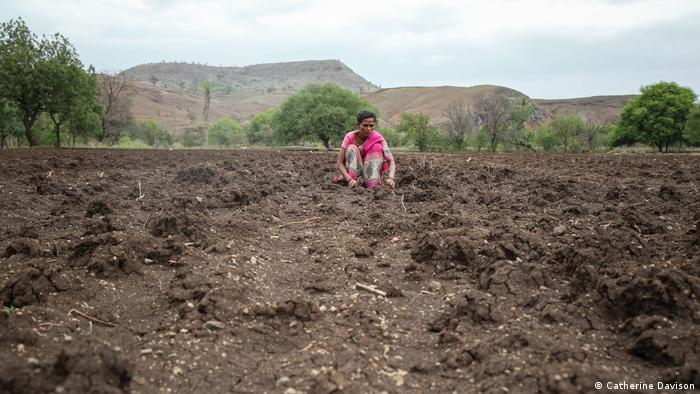 Suman Sanap, 40, working in the fields near Khadakwadi village. The villagers plants staple crops such as millet to get by

A heat wave that swept the country earlier this year saw highs of over 50 Celsius (122 Fahrenheit) causing nine deaths in Maharashtra state alone.

And conditions are only set to get worse. A report published last year by the Intergovernmental Panel on Climate Change (IPCC) predicts that climate change is likely to increase the frequency and severity of droughts across the subcontinent, with net annual temperatures in India increasing by between 1.7 and 2.2 C by 2030.

Earlier this year Prime Minister Modi announced a plan to provide piped drinking water to every Indian household by 2024. Since his re-election earlier this year, the government has promised that mitigating the country's water crisis will be a top priority.

For the villagers of Hatkarwadi though, five years may be too long to wait. 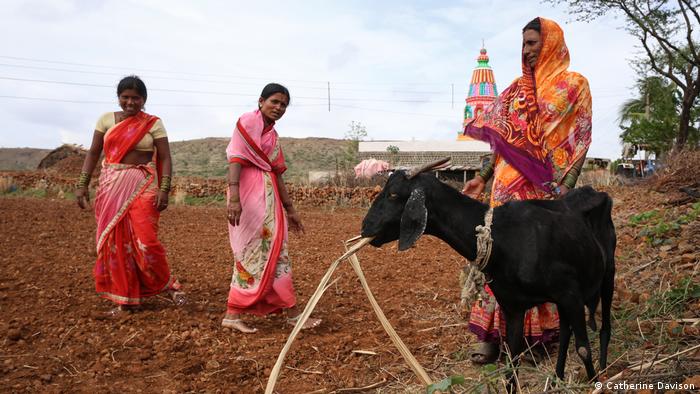 Mainly men go to work in the cities, leaving the women with the burden of maintaining the family fields on top of their domestic duties

Ganesh Sadgar, a 27-year-old master's graduate, who grew up in the village, has been searching for a wife for the last three years, but has almost given up hope of finding one. None of the women he's been interested in want to move to his village, he said, as is traditional in India marriages. Their parents worry what will happen to their daughters in a village with no water.

Read more: Are we running out of fresh water?

And when he does persuade a woman to come visit, they don't even have enough water to offer them to wash their hands, he lamented with a sigh. "They visit once and then never come back again." A year ago, he moved to a city 150km away to work in a butter factory, and now only comes home once or twice a year to visit his parents and check on the fields. 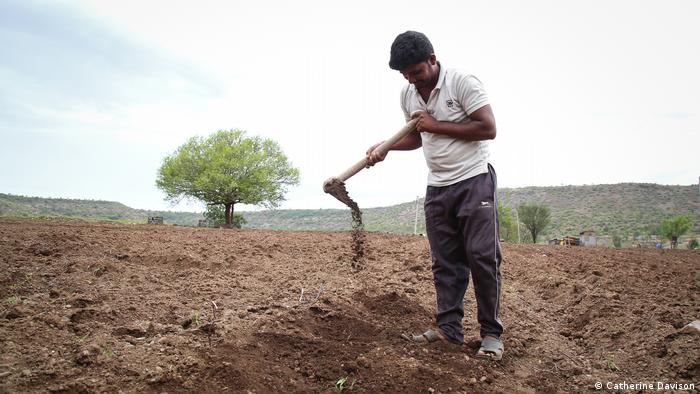 Ganesh Sadgar, 27, has been looking for a wife for three years, but no women are interested in moving to a village with little water

Women who do marry men from the village are often left behind when their husbands inevitably leave in search of work. These women are tasked with looking after elderly in-laws and children who are too young to travel. For Meera, living alone carries the double burden of maintaining the family fields on top of her traditional domestic duties.

When asked when she will next see her husband, she gestures evasively towards the parched lands beyond her house. "He will come home," she said without much hope in her voice, "when it rains."

World Water Day is drawing attention to the growing threat of water scarcity. Some countries are making the most of every drop they use – but others are still squeamish about reusing wastewater. (22.03.2018)